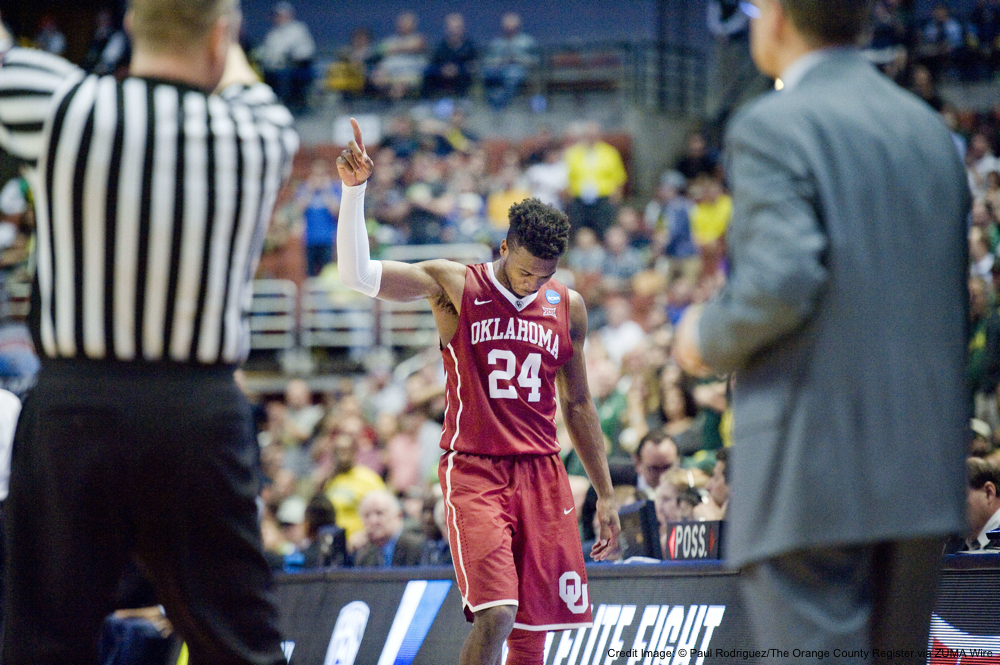 Oklahoma is in the Final Four for the fifth time with the win over Oregon in the Elite 8 (1939, 1947, 1988, 2002, and 2016). The Sooners have never won an NCAA Tournament Championship, but have been the runner-up twice. The most recent loss in the Championship game came to Kansas and Danny Manning in 1988. In 2002, Kelvin Sampson led the Sooners to the Final Four with point guard Hollis Price. The Sooners lost to Indiana in the semifinal, which is ironic since Sampson would leave OU to be the Indiana head coach in 2006.

Under Lon Kruger, the Sooners have improved their win total every season (from 15 in 2011-2012 to 29 this season). The Sooners have also made four straight NCAA Tournament appearances, and have won 12 games in Big 12 conference play the last three seasons. Kruger has built a powerhouse with remarkable consistency on the roster. The Sooners have gone three straight seasons using the same starting lineup the entire year (not the same lineup for three seasons, but each season using the same lineup). Kruger is one of only two coaches to take five different teams to the NCAA Tournament (Tubby Smith became the second coach with Texas Tech this season). Kruger led Kansas State, Florida, Illinois, UNLV, and Oklahoma to tournament appearances, and tournament wins as well.

Buddy Hield is arguably the best player in college basketball this year, and with Denzel Valentine losing in the first round Hield has been the best player in the tournament. The Sooners know how to create shots for Buddy, and he does a great job of creating for himself as well. The promising thing for the Sooners is that they have been able to win without stellar performances from Hield. The surrounding cast has also kept them in games until Buddy found his rhythm (Hield scored 29 of his 36 points in the second half against VCU). Not only is Buddy a great player who is fun to watch, but he is extremely likeable. He says the right things, has a huge smile, and plays for Lon Kruger (one of the nicest guys in the business). The Sooners are killing everybody with kindness this season.

Against Oregon’s match-up zone, Oklahoma ran several man-type sets to beat it. With the high pick and roll, the Sooners forced two Oregon Ducks to step towards the ball leaving Spangler wide open in the lane. This may come in handy as Villanova will play some zone defense against the Sooners.

Oklahoma kept going back to high pick and roll actions, whether Oregon was in a zone or man. In this option, Oklahoma runs a high pick and roll leaving the opposite big man (Spangler) in the weak side short corner. On the roll, Spangler’s defender steps up to help and leave Spangler open for an easy layup. In the video, you will see weave to PNR and weave offense, but it all stems from their high PNR weave set. The Sooners will use a combination of dribble handoffs and ball-screen to spread out the defense and create driving lanes. High Slip Out Side PNR

The Sooners keep with the high ball screen theme, but instead of actually setting the screen Spangler quickly slips to the right. Spangler passes to Hield and attempts to set a ball screen, but Hield decides he doesn’t need it and shoots (and makes) a long three point shot.

The end clips show various ways that Buddy creates his own shot. He doesn’t need much space to shoot and is very effective with his step-back moves.

Matching Up Against Villanova

The Sooners will need a good showing from Hield to beat Villanova. This game is a battle of guards, and if both teams shoot well this will be a fun game to watch. Oklahoma needs to be ready to play against man and zone defense, and needs to defend against Villanova’s horns set plays that they have been using in the NCAA Tournament so far.