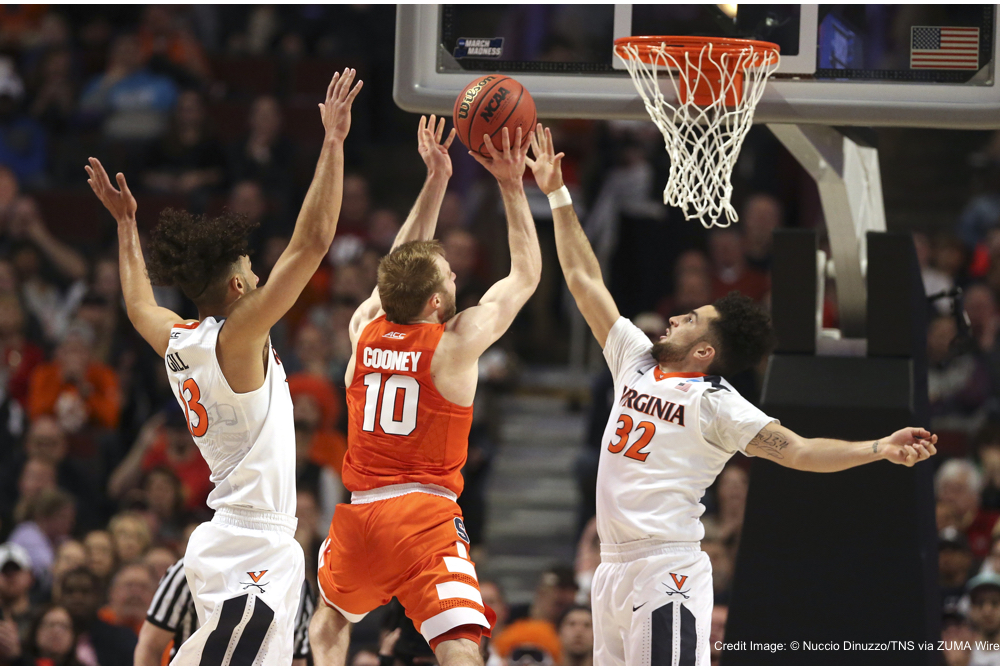 The Syracuse Orange have made an improbable final four run this year as a 10 seed. They play a basic style of basketball that involves motion offense on one end and their legendary 2-3 zone on the defensive end of the floor. They run several sets for their best shooter, Trevor Cooney to get an open look as well as some basic ballscreen actions. Offense is simple and a basic motion offense besides the few sets they run, which means they can be hard to scout and defend. Defensively, their 2-3 zone is not like a typical 2-3 zone and will force North Carolina to play more perimeter oriented attack, with offensive rebounding being key for the Tar Heels.

Syracuse will run this set to look to get their guards open, mainly Trevor Cooney but will run this continuous to look to get a good shot. The basic idea is to have two guards aligned with each other at the top of the key, and both bigs are outside the blocks screening. Both guards pass the ball back and forth to the side the guard cutting off the bigs is running to, looking to get him open for a shot.

Syracuse runs multiple stagger screens out of and initial stagger ballscreen looking to get guards open.

Syracuse runs a Princeton set looking to get two guards cutting through and then having the big man either dribble hand off or pass into a ballscreen for either of them. Look for Syracuse to hold up the hand signal “Five” when they want to run this action.

The 2-3 Zone Defense of Syracuse is not like a typical 2-3 Zone Defense run by a lot of teams. They use their length and athleticism to force team to play a more perimeter oriented attack against their zone. The wings will extend higher and teams struggle to deal with the length and typically settle for oustide jump shots, which are normally contested.