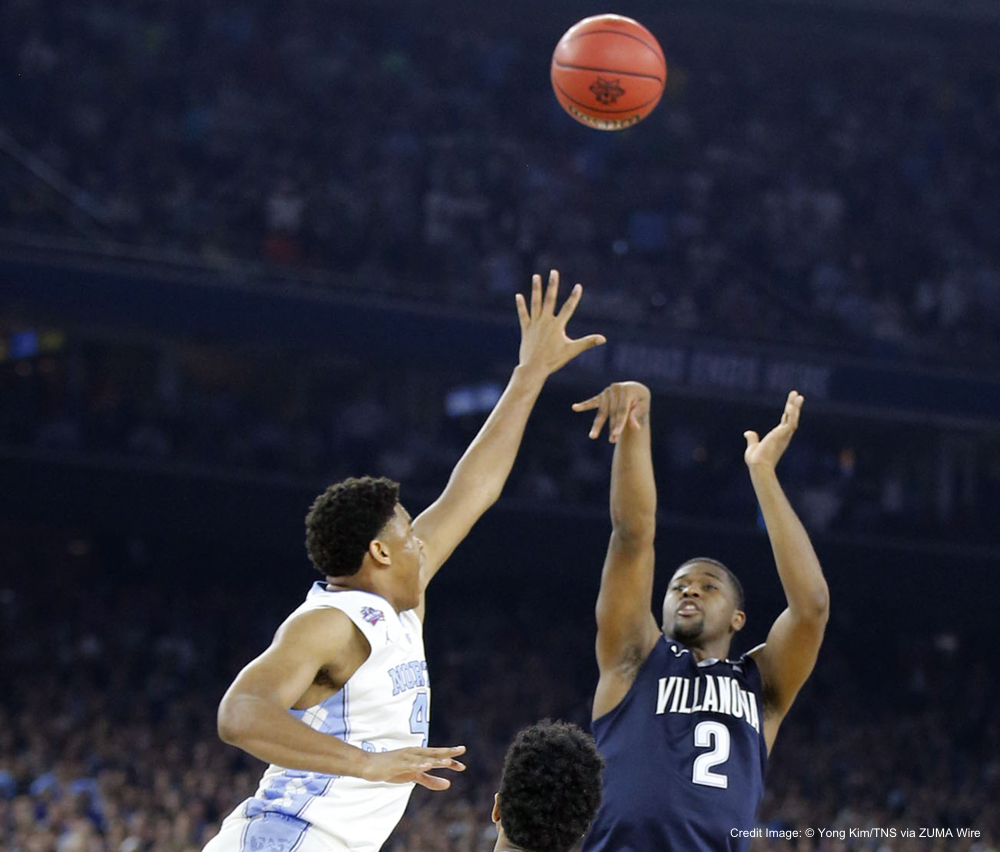 The Villanova Wildcats won the 2016 National Championship over the North Carolina Tarheels in dramatic fashion Monday night. With 4.7 seconds on the clock the Wildcats ran a great end of game pitch set to get Kris Jenkins an open look at 3 and the championship. Nova also runs a terrific 4-out motion offense that Coach Randy Sherman broke down in the build up to the title game this season. Today we are going to look at some of the best sets Villanova ran this season, and why they were effective.

The title game came down to a last possession, last second shot after a time out by Jay Wright. Starting with a high ballscreen to free up the guard, Kris Jenkins trailed the play after he inbounded the ball. While trailing the play Ryan Arcidiacono drove into 2 North Carolina players and pitched the ball back to Jenkins trailing for the game winning 3.

Horns sets have become more and more popular with Jay Wright over the last few seasons, and this one is designed to free up shooters. After using either of the ballscreens in Horns, both bigs move to the same wing and set stagger screens for guards, after the first guard clears, they continue for the guard on the other wing. They also have a counter built into this set for Kris Jenkins to flare out after and look for a shot, which works because usually big men are taught to show on screens and Jenkins will typically be open off it.

Villanova posts up any player 1-5, and they look to do it often when they feel they have a mismatch at that position. Because Villanova drills and practices footwork daily, they can be very effective playing out of the post.

After they post up a few times, especially the 4/5 man they then run nice ballscreen action out of it. Instead of entering the ball into the post, the 5 man who was high sets a ballscreen for the guard on the wing. The player in the post empties and fills on the wing, a very difficult action to guard.

Another set with a guard post up option, Villanova runs Hook action where the big screens down for a guard and the guard rejects it with the big opening up to receive the pass. After the guard passes to the big opening up, he receives a backscreen from the 5 man into the post. Out of this they play a 2-man game with options for a guard post up, dribble hand off or a pick and roll. Against a zone, Villanova runs a great set designed to make the defense guard 3 players with 2 men. An initial ballscreen on one of the guard at the top, the lead guard slips to the wing. The 5 man flashes to the high post and the guard in the corner dives to the short corner and the set has 3 options from there. The guard on the wing, the big flashing, or the guard in the short corner over the top-this forces the defense to guard all 3. Villanova runs a soft-to aggressive 1-2-2 full court zone with some traps and aggressive plays out of it. Typically they look to get steals in the corners around the half court line, but this can also be used to slow the game down. By running this press they can get the shot clock into the 20’s before the opponent can even start to setup their offense.