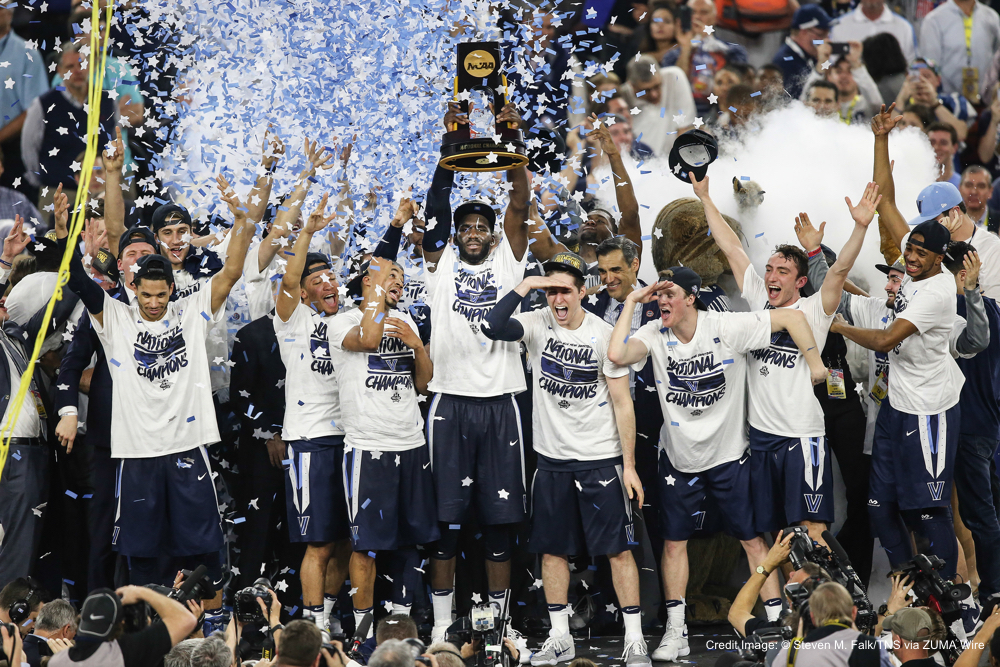 Today I am suspending my series of posts on coaches being teachers to talk a bit about the NCAA Men’s Basketball National Championship game last week. I am not going to be breaking down plays or going into any specifics on basketball. I just want to talk a bit about the beauty of watching two excellent teams, talented kids with great poise and character in an amazing back & forth game that ended on a buzzer beater, and the culture of a champion.

That game is one of the best (if not THE best) championship games I have ever seen. I hope you were able to watch it and enjoy it for all that it provided fans of all levels of interest in college basketball. The largest lead of the game was 10 points for Villanova, and it lasted for all of about 30 seconds. While I was pulling for Villanova since they had not won a championship in 31 years, I hated to see either team lose.

There are a couple reasons why I would have liked either team to win. Actually, there are probably about 30 reasons – the people on those teams. This championship was filled with players and coaches who are likeable people and who seem to carry themselves with the kind of character that we want to see in our young people and their coaches.

Now I’m sure that people who are anti-Carolina will bring up the investigation into academic fraud that they are under, but in this post I am talking about the people involved in that contest. And whenever I tout someone’s character, I also issue a disclaimer that I don’t know these people personally, so of course, I cannot be 100% certain of their character. However, from all that I can tell from the stories, articles, and soundbites that I have read and heard, both teams are filled with high character people.

For instance, look at how Roy Williams and his players spoke after losing the game. That had to be one of the hardest losses they were ever involved in, yet they sat up in front of all the reporters with millions of people watching and answered each question with poise and grace. One of those players was their point guard, Marcus Paige. I love everything I have seen and heard from people about this young man. (Watch this video of his senior night speech to see one example of what a fine young man he is, and make sure you watch it at least through what he says about his head coach, Roy Williams.) He seems like the kind of player we would all want to coach.

This morning, former college/pro player and current CBS basketball analyst, Clark Kellogg was on the Colin Cowherd radio show. Cowherd asked him, “When I say ‘Villanova basketball,’ what is your feeling on their brand?” Kellogg’s response was this:

“Collective tenacity, grit, toughness, great chemistry, and high character would be the kind of words I would use to describe…Villanova’s brand. Those are all words you can live with whether you are running a corporation, playing basketball, or broadcasting. Those are winning characteristics.”

His response was powerful in a few ways. First, who wouldn’t want to be described with the words he used to describe that team? Second, notice how he says those characteristics would be part of a winning culture no matter what you are talking about. Third, there is not one physical “basketball” element mentioned – offense, defense, rebounding, etc. Yet these are the characteristics that the Villanova program stood for in his mind.

As a speaker for Proactive Coaching, I am fortunate enough to speak at schools, leagues, coaching clinics, and businesses on a variety of athletic, coaching, leadership, and team culture topics. In our presentation, First Steps to Successful Teams, we talk about intentionally creating your culture by developing what we call “Core Covenants.” (I wrote a couple of posts last year on Intentionally Creating Your Culture and on Covenants for Coaches and Teams. Just click on those titles to be taken to those posts.)

Covenants are basically your team standards. We tell teams to focus on behavioral attributes, rather than physical skills when you are creating your covenants. That’s because players and coaches have total control over their behavioral characteristics, but they don’t always have complete control over their natural abilities or their physical skills that they possess at that moment.

So, we tell coaches and athletes to focus on behavioral things like having a teachable spirit, discipline, integrity, and selflessness when developing covenants. Notice how Clark Kellogg described Villanova – “collective tenacity, grit, toughness, great chemistry, and high character.” Those are things that their players and coaches had total control over. While they can’t make their jump shot or their vertical leap markedly better in a single instant, they can choose to have tenacity, grit, toughness, chemistry, and character right now.

What a great testament to the Villanova team – that after the greatest victory that any of them had ever experienced, an observer focused on those elements of who they were as being the things that jumped out at him more than how well they shot the ball or played defense.

When we do that First Steps to Successful Teams presentation, we ask coaches and players, “So what do you want to be known for? If someone were to come watch you practice, watch you play, watch you at team meetings, what would they think you stand for? Would other people be able to figure out what you are all about if they observed you for a while? Have you intentionally created the culture that people see, or did it just happen?”

Every team has a culture. However, not every team’s culture is created with purpose and intent. Too many teams’ cultures happen by accident because the coaches and players leave it to chance. It is up to us as coaches and teammates to intentionally create the culture we seek. That way, when someone like Clark Kellogg (or anyone else, of course) is asked, “What is your feeling on their brand? What do you think they are all about?”, the answer will be something we have worked to create.

For more on creating the kinds of cultures you seek, check out the Proactive Coaching website. There are a variety of booklets, books, DVD’s, and in-person presentations that will help you with your culture. Feel free to email me at scott@proactivecoaching.info for suggestions on which ones would be best for your specific situations.