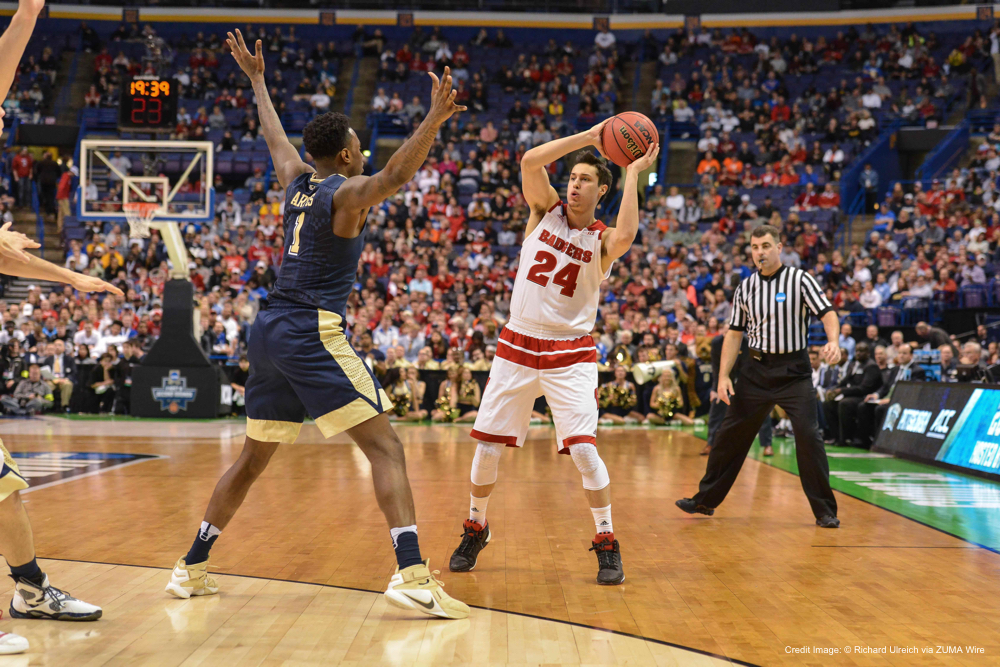 Apply these Box Pressure concepts of man-to-man defense to confine offenses and disrupt your opponents’ spacing and ball movement.

Offenses often rely on passes to trigger actions. Continuities and some set plays need the ball to change sides of the floor for actions to be initiated.

Using Box Pressure teaching points within pressure man defense can disrupt the ball movement and spacing of your opponent’s offense. Entire Box is available. Any pass to the wing would “shrink the box.”

With the ball centered and the pass to wings uncovered, the entire width of the court is available to the offense. As the 1 can pass to either his/her right or left, the entire shaded area is their “box.” Against some offenses that are reliant on a pass to the wing, consider denying even the pass to the wing that initiates their offense or set. If your opponent habitually passes to the right wing consider denying that pass and allowing the pass to left.

For those who want to disrupt offenses from the start, consider denying the penetrating pass to the wing altogether. Or at the very least, force wings to catch the ball going away from the basket with their backs to the rim. When pass is made to wing, the box shrinks. RULE: Once the ball is on the side, KEEP IT THERE! X1 must jump to the pass and front a basket cut or DENY the pass to the swing spot

As depicted in the diagram below, any pass from point to wing “shrinks the box.” While denying the pass to the wing is negotiable, allowing the ball to return to the top after being passed to a side is not.

RULE: Once the ball is on the side, KEEP IT THERE!

Keeping the ball on the wing allows the defense to “load up” on ball side. It is as if the defense is playing 5-on-2. X1 must keep the ball from getting to the top of the circle, also known as the “swing spot.” When ball is on the wing, on ball defender (X2) forces to baseline checkpoint and X1 prevents ball reversal. KEEP THE BALL OFF THE SWING SPOT!

The “box” has shrunk and the offensive area of operation is confined.

Aggressive denial of centering passes is the backbone of Box Pressure. When assigned to a player on the swing spot you must fight to prevent ball reversal. Further, a pass from 2 to 1 would increase the size of the box.

X1 must turn his/her butt to the ball, get a hand and a foot in the passing lane and fight to keep the ball off the swing spot.

RULE: Deny any pass that would make the box bigger!

This is an absolute must. Any player at or coming to the swing spot must be denied or, at the very least, forced to catch the ball higher in the court going away from the basket with their back to the rim.

If there is a high-low alignment and the ball is on the wing, denying the pass to the corner (3) is optional. A pass to 3 would further shrink the box; it is not as damaging to the defense.

However, denying the pass to the top (4) is mandatory. Pass to 3 would shrink the box. Pass to 4 would increase the box. Don’t let 4 catch it on the swing spot!

By keeping the ball off the swing spot and forcing the pass to 3 in the corner, the box shrinks and offensive spacing is further confined. X2 cannot allow the pass to 2 for this pass would increase the size of the box!

Now it is incumbent upon X2 to not allow the pass to 2 as that pass would increase the size of the box. When talking offense, we encourage our teams to swing the ball from side-to-side, show patience and find a good shot. Ball reversal is often cited as the hallmark of a good offense.

If ball reversal is good for your offense, it is probably beneficial to your opponents’ offense as well!

Use these Box Pressure techniques to prevent that beneficial ball movement, destroy spacing and disrupt your opponents.