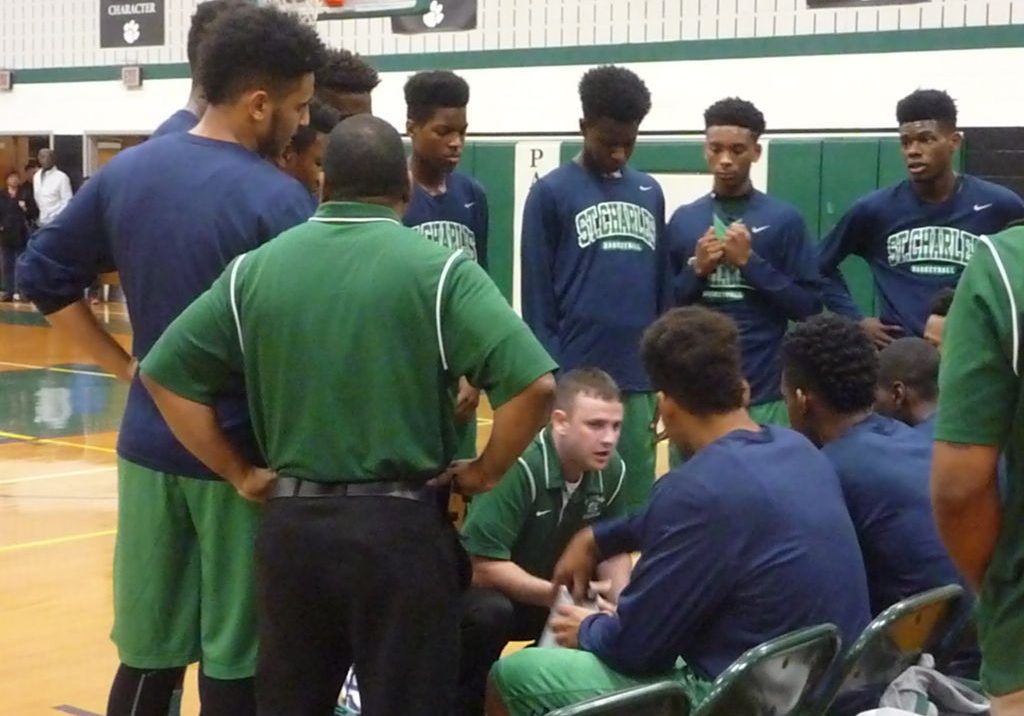 When Coach Brett Campbell walked into his first day as head coach of the St. Charles Spartans, he faced one of the biggest challenges of his coaching career. As a brand new, first year high school, Coach Campbell had players joining together from eight different schools and coaches coming from three different programs.

While working Coach Wootten’s camp each summer, one thing that was stressed at the coaches’ round table each day was the importance of having a philosophy. The very first thing we did is a staff is we sat down and hashed out our team philosophy, and we boiled it down to the development of three important traits in our student athletes. Intensity, Discipline and Unity, or “I.D.U.” Every practice, study hall, team meeting or shoot around we stress the importance of Intensity, Discipline and Unity to our guys.

Academics comes first, as our Varsity team has been able to maintain a team GPA of above 3.4 for each of the past two seasons. We had two young men, 2016 Omar Tejumola and 2017 Marshawn Hall who were named Academic All-State for their ability to maintain a 4.4 GPA throughout the duration of the basketball season.

It can be difficult to bring together so many personalities and blend them into one cohesive unit. We have a wide variety of individuals, from extremely out-going players with huge personalities, to guys that are very introverted and quiet. Fortunately, the guys realized that they all share the same common goal of improving as individuals on and off the court. In order to maximize their success, they would have to bond together to attempt to achieve that goal. Our guys spend a lot of time together off the floor, from study hall, to team cook outs and trips to local college and professional games. I was fortunate to work with Coach Jimmy Ball, who began coaching at North Point when it opened, eventually leading the program to a state title.

We were also able to bond with the intense summer schedule, which included open gym/conditioning, summers leagues, team camps and culminated with a successful run at the prestigious Hoop Group Elite Team Camp. Our three senior captains, Sean Scott, James Selby III and Omar Tejumola really did a great job of unifying the guys and bringing them together.

We created a master philosophy from the top down, which is where FastDraw came into play. I am able to come up with diagrams and drills that help demonstrate and teach our defensive system, as well as help build our motion offense. I can share these plays and diagrams seamlessly with my coaching staff, which allows us to all be on the same page. We’ve built up a library of drills that can help us teach different components of our system that our guys may be having difficulty with.

One thing we were able to notice early on in practice was how each young man was taught differently at their previous school. For example, with regards to transition offense, some of our guys were used to sprinting to a corner, some guys were used to walking up the floor, other would stand and wait for a coach to call a play, others were used to running the same secondary break action every time etc. So we had to come up with drills and breakdowns to help teach our transition system and how it blends into our half-court offense.

The first drill comes from Coach Fred Hoiberg. We call it “Iowa State Transition” since we got the drill while Coach was at Iowa State. The drills teaches the guys to run the floor, communicate and pass ahead and the importance of transition points all within a competitive environment. The guys are working together to achieve a team goal, with a consequence if they do not achieve their goal. The second drill comes from Coach Jim Boone, the Head Coach at Delta State and is called the 3 on 3 Get Back Drill. We have some teams in our conference that do a fantastic job of pushing the ball up the floor, even after made baskets. This drill teaches our guys to do this- we call it “fast break makes”. It also teaches the importance of transition defense and stopping the basketball. We keep score and go live for a set amount of time with a consequence for the team that doesn’t win. For the rest of the story, follow Coach Campbell and the St. Charles Spartans on twitter: @CoachCampbellSC