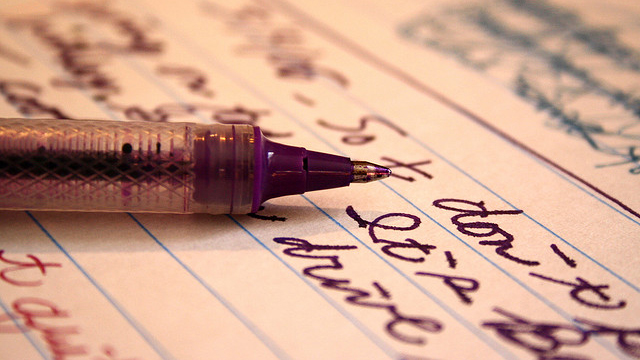 Technology has had a radical impact on the learning process. Educators use access to the internet, video and other media daily to drive their lessons home.

For coaches, tech advances make life easier—from accessing and editing game film, to communicating with your whole team in an instant.

Technology has also changed the way many students engage in the classroom. Over two-thirds of Princeton students take notes on a laptop, while just under half type notes at UCLA and 41% use laptops at North Carolina.

Studies show, however, that students retain more information long-term when they take notes the old-fashioned way, with a pen and paper.

Researchers found that students typing notes tend to take down verbatim what they hear and accumulate more notes than those using pen and paper. And although when tested immediately after class, they remembered more than students who hand-wrote notes, after time passed they remembered less.

The process of writing notes down encoded the concepts more deeply in the brain and enabled the students with handwritten notes to recall more information a week later.

I’ve noticed this in my own life, in a slightly different way.

Back in the late 90’s I discovered the Franklin Covey daytimer. I had a version with a large calendar, an area for my to-do list and a bookmark with my goals for the week.

It was one of the most productive seasons of my life. I loved that thing!

When Covey came out with the software daytimer systems, I thought my productivity was going to soar to even greater heights.

Over the years I tried a few different versions, but all the trial and error proved only one thing.

A pen and paper works better for me.

The process of writing it down helps me remember, as does having my notes and list visible on my desk.

So what’s my point?

Your athletes should never show up to a meeting, whether individual or team, without a pen and paper. [Tweet That!]

With all the information they are bombarded with on a daily basis, how can you expect them to remember all that you tell them?

iPads and laptops are great, and many student athletes have the benefit of university issued technology at their disposal to make their lives easier.

Even so—make them write stuff down.

Create their team notebooks with pages for them to take notes. Remind them to review and even study their notes. Encourage them to learn plays by drawing them out.

I’m willing to bet that this one adjustment will help them better understand and retain the important information you communicate.

Resource: Can Handwriting Make You Smarter? by Robert Lee Hotz

How to Help Your Players Retain More Information appeared first on Life Beyond Sport.