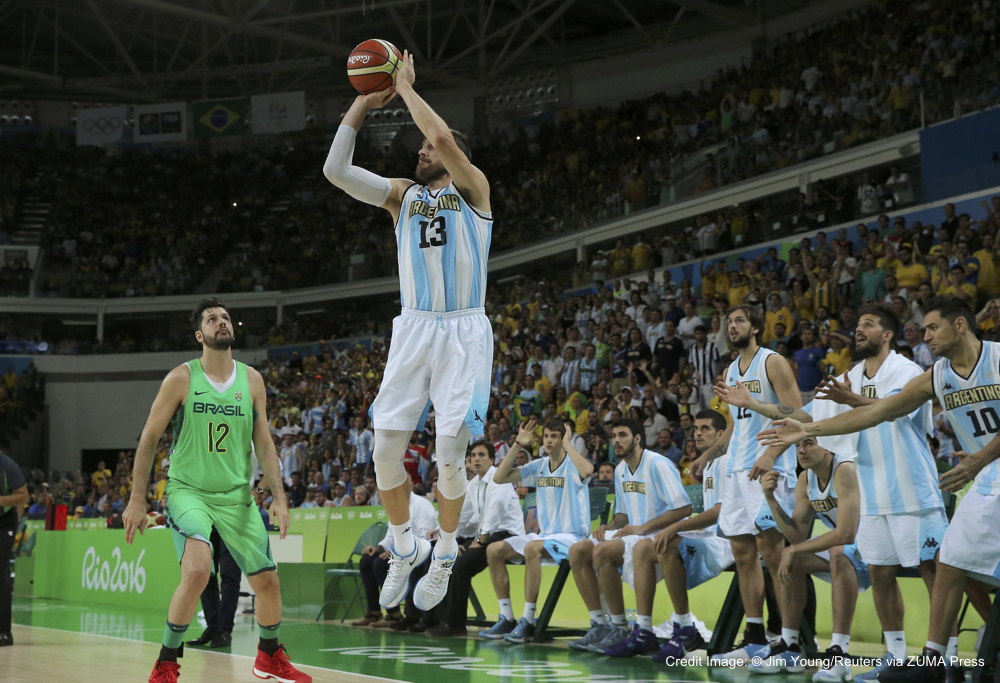 Part Two – In the Locate Phase of the Create And Locate offensive approach the only goal is to locate One Count shots.

As detailed in Part One of this series, creating an advantage by “piercing the dome” is the first objective of the offense upon gaining possession when using the Create And Locate offensive approach.

Proper halfcourt spacing aids in this mission and there are ways to pierce the dome with the ball and without the ball. Should no help come, players can score by piercing alone.

Good defenses help one another and as a result piercing the dome alone often does not directly result in a score. What piercing does do is create help/rotation situations for the defense that can be exploited for scores.

Count Method And One Count

A beneficial teaching tool for coaches is the Count Method featured in the book Rhythm Offense. In short, the Count Method summarizes the concept of playing off your shot by being prepared to shoot immediately upon the catch. You are most open when you first catch the ball, therefore if you are going to shoot it is best to shoot on the “one.”

Should the defense close out the shot opportunity, the player can attack the momentum of the defender and drive the ball on the “two.”

If the defense contests the shot and absorbs the drive forcing the offensive player to hold the ball a bit longer, he/she moves the ball on the “three.”

One Count is the backbone of the Locate Phase. Assuming the defense helps when the dome is pierced, the ball is moved to the open player. This creates the dynamic one-on-one against the recovering defender.

In Frame 1 below we see the offense spaced according to the Create And Locate spacing guidelines and 1 gains and advantage by piercing with the dribble via the ball screen.

In Frame 2, X3 helps to prevent 1 from scoring. The trade-off is 3 being open in the corner. Creating dilemmas such as these are the goal of piercing the dome. The penetration created the advantage and 1 should transfer the advantage to 3. On the pass, 3 must catch “loaded” and with the sufficient lead, fire away the One Count shot (Frame 3). Should the defense shorten the lead with an aggressive contest, 3 attacks the momentum of the recovery and drives the ball on the Two Count (Frame 4). Players follow drive and space rules around these Two Count attacks.

The subsequent drive would either make it all the way to the rim or the advantage created would elicit help from another defender whereupon the ball would move to a teammate who is set up for a One Count opportunity and a dynamic one-on-one of their own. The defense is put into recovery mode and there they should stay.

Once the dome is pierced and an advantage is gained, only a poor “count decision” by an offensive player can surrender it. For example, a player holding the ball when they had a One Count shot allows the advantage to evaporate thus the offense must find a way to pierce the dome all over again.

After the dome is pierced and an advantage is created, the offense must maintain and increase the advantage until a one count shot is located.

Had 3 not been loaded on the catch or held the ball and allowed the dynamic defender to kill the advantage, both the rhythm of the offense and the advantage gained by piercing the dome are squandered.

The better your team is at making count decisions after the dome is pierced and the advantage transferred, the better your offense will be. Drills and practices designed to teach such decision making should be the cornerstone of offensive work.

Of course the ball screen scenario depicted above is not the only way to pierce the dome. Simple dribble penetration or gaining an advantage by attacking out of a dribble handoff can pierce the dome. As can a post entry or locating a roll man from the ball screen. The method is secondary to the result which is to create a help/rotation situation by the defense and turn that into a One Count shot.

It is important to note that every player needs to develop a One Count weapon and that “One Count” does not always equal a catch-and shoot three. A player may rim cut when his defender helps on a drive. That cut can lead to a One Count layup.

Post moves, putbacks and a shot coming off a ball screen when the on-ball defender goes under the screen are all examples of One Count scoring. Should any of those be taken away by helping defenders the ball must find the open man for their One Count opportunity. Here the piercing player does not even have to touch the ball to get the offense to the Locate Phase and play from an advantage.

3 would catch and shoot on the One Count. If X3 recovers out of control, 3 would drive hoping to get to the rim for the score. If the subsequent attack was stopped by a helping defender then 3 locates a teammate with an advantage.

Once the dome is pierced and the defense helps in any way, the Locate Phase is initiated and then it is just basketball. The hunt for a One Count shot begins. Only a poor decision, selfish play or excellent defense resets the offensive advantage.

Edit your playbook. Pierce and Play. Let the ball do the work.