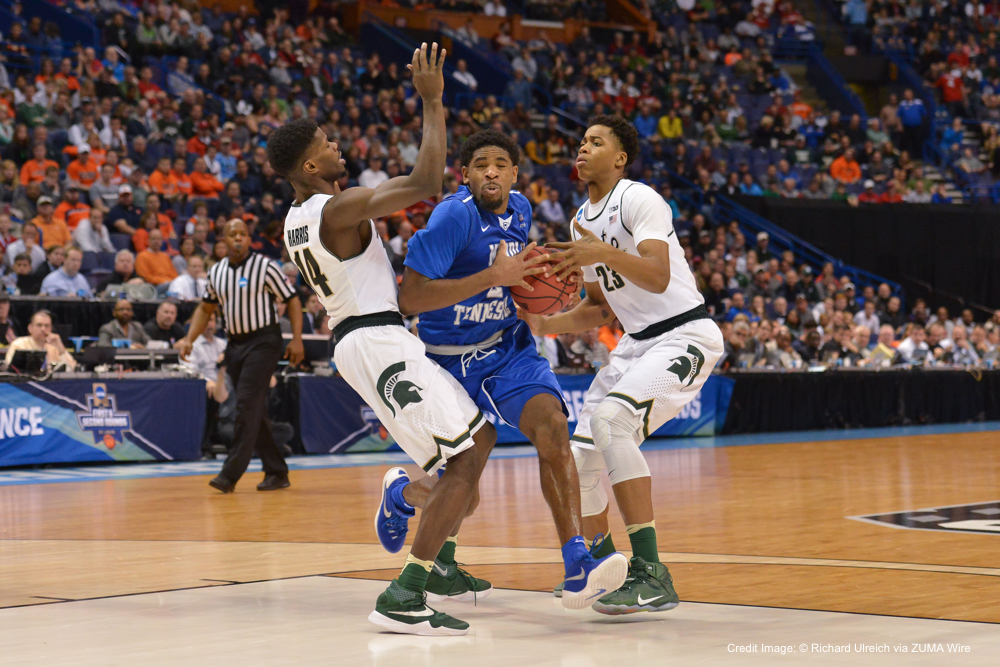 First Rule: No middle! But should an opponent drive middle, here are three options for help on middle penetration.

One of the cardinal sins of pressure man-to-man defense is to allow middle penetration from the wing. If the ball is at or below free throw line extended, the on-ball defender is in Baseline Push and should be angled as such.

Here are some tips for Baseline Push:

But offensive players do not always cooperate with these edicts. If a player on the wing attempts a middle drive from the wing, the on-ball defender cannot bucket step (open their hips) and expose the elbow.

Practice a Push And Reach defensive footwork technique where the low foot pushes and the high foot reaches in an attempt to “bubble” the drive towards the top of circle checkpoint. Push And Reach protects the elbow, while the bucket step exposes the elbow and in pressure man defense, you do not expose the elbow. Admittedly, this is rather idealistic as good offensive players do not cooperate. Baseline Push is the goal and you want defenders to feel as if they must get it done on the ball. But good offensive players are at times going to challenge the high foot and attack the elbow with the dribble. Allowing it is a cardinal sin, but not helping properly when it happens is unforgivable.

Here are three options for protecting the elbow and stopping middle penetration with helpside defenders.

Trapping the middle drive is one option. It is common to trap a baseline drive and this concept mirrors that approach but with the Top-I helpside defender.

In the diagrams above you see the Top-I defender (X2) getting outside the paint and protecting the elbow by forming an elbow trap with the on-ball defender (X3).

X1 would then rotate to the skip pass and X2 switches to 1. The command to the original on ball defender is to keep running! Top-I takes your check and you sprint to his or hers. Should the skip be made you’ll arrive when the ball arrives with proper effort. The fly switch, with just a touch of unconventionality, can be a great tool for creating turnovers as well.

A third option is the Plug. 3 defeats X3 on the middle drive and Top-I plugs by backing his/her butt towards the drive. Plug the gap without opening up and showing your front side to the ball then quickly recover to your check. X3 must give effort and try to get back in front. The plug helps slow the attack.

The goal of the plug is to get the driving player to pick up his/her dribble before the ball gets deep into the paint. Again, protect the elbow! The advantage of the plug is that the defense does not have to go into rotation.

It cannot be stressed enough that the on-ball defender is the first line of defense to stop middle penetration. They must play on the high half of their check and influence the ball handler to the baseline checkpoint.

At times, the outstanding offensive player makes this a challenge. Top-I always helps and a coach can use any of these three options to protect the elbow.

Also, enroll in our month-long Pressure Man-To-Man Defense Seminar where you will learn all you need to know to take pressure man principles to your team!