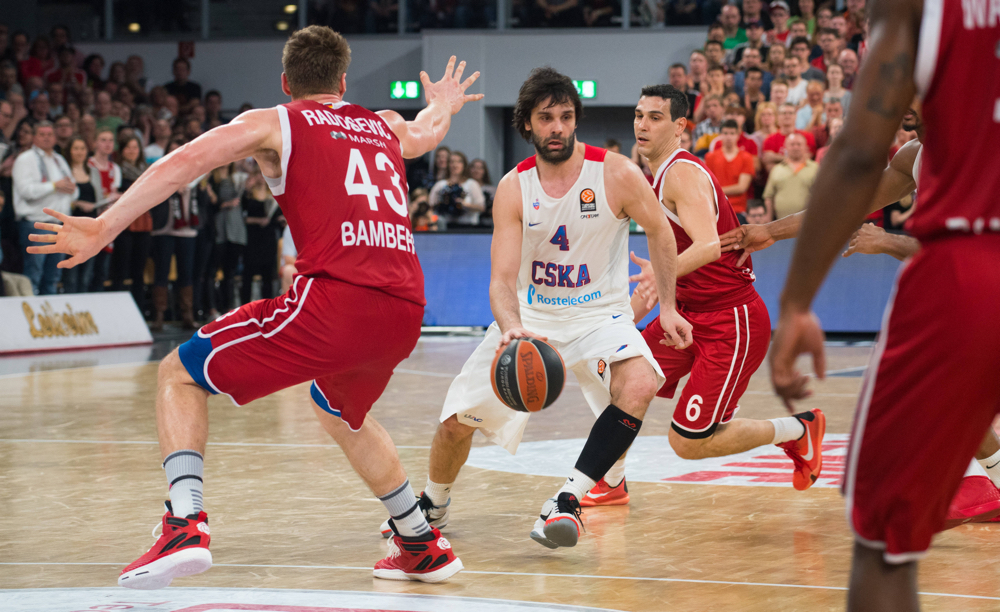 Part Three – These quick, simple piercing sequences help “pierce the dome” and get your offense from Create Phase to Locate Phase.

As detailed in Part One of the Create And Locate series, the primary objective of the offense upon gaining possession is to “pierce the dome” as early in the possession as possible.

The period of time prior to piercing is called the Create Phase and it should be brief. An urgent tone should hover over the team as they look to create by piercing the dome. There are straightforward ways to pierce the dome with the ball such as dribble penetration (QUICK), accepting a ball screen and attacking out of a dribble hand off (WEAVE).

Additionally, entering the post (PUNCH), hitting the slip or roll man from a ball screen or passing to a basket cutter are ways to pierce the defense without possessing the ball while piercing.

In Part Three, we will discuss some additional piercing sequences that are fast and concise. These are not “plays” per se, but reactions your players can organically implement into the offensive approach. Each of them has one clear objective: pierce the dome.

These sequences exist to take the offense from Create Phase and into Locate Phase where the One Count shots detailed in Part Two are are found.

These concise sequences are designed to be reactions by the players, but they could also be used as “calls” after stoppage. The spirit of the Create And Locate approach, however is seamless flow from defense to offense and to pierce by using the straightforward methods or one of the sequences without having to call a thing.

In the SLICE sequence below, a passer cuts away and a player slices off that cut to the ball. Were 2 to enter to the cutter (4), the pass pierces the dome and 4 either scores or draws help collapsing the defense and getting the offense to Locate Phase. If not, there is a double gap for 2 to attack after the cutter exits.

The DRAG sequence uses an early drag ball screen in transition to aid in piercing the dome. The DRAG sequence can be coupled with roll and replace to stay within the Create And Locate spacing rules. 1 wants to get to the rim, hit the roll man or engage an off ball defender in help.

The advantage gained by the ball screen would be transferred to the helping defender’s check and Locate Phase commences.

The CHASE sequence is twofold and can feature a hand off or a ball screen depending on the personnel involved in the sequence.

In the frame below we see a CHASE from a guard-to-guard pitch ahead. The passer “chases” his/her pass and sprints into a hand off. Attacking out of that hand off pierces the dome. A guard could also “chase” his/her reversal pass to a trailer and pierce the dome.

If a “big” were to pass to a guard, they can “chase” into a ball screen. Accepting the screen and the ensuing penetration, slip or roll would pierce the dome. Both types of “chases” should be executed at sprint speed. Chasing into the hand off at top speed gives the offense a possible advantage enabling the receiver to pierce. Chasing hard into the ball screen can help the screener arrive alone as well.

Using the RISE sequence allows the offense to pierce using a cut off the high post “rise” and flow into hand off action. 5 rises into the high post and the player opposite the feeder cuts off the catch to take a hand off. Should the first cutter not receive the hand off, 5 then has the option to hand off to 1 or 3. There are multiple piercing opportunities in the RISE sequence. The actual pass to the high post itself pierces the dome and could lead to a collapse and a pass to a One Count shot.

In the Create And Locate a dribble attack is known as a QUICK and that is a simple way to pierce the dome for certain. But when a defender helps from one pass away to seal the QUICK attack the TOSS sequence can be an effective piercing method. The spacing out front is one key of an effective TOSS sequence. The vacant zone between the top players is imperative. The player can dribble away to “widen the slots” before making the QUICK attack that leads to an effective TOSS.

A TOSS can be executed on a QUICK between any two defenders. The TOSS itself should be a “rugby toss” to the cutting player heading downhill behind the penetration to pierce the dome.

The receiver attacks the rim and scores if no collapse occurs. Should help come, by engaging a second defender the Locate Phase is initiated and the offense maintains the advantage until a One Count shot is found.

These piercing sequences follow all the Create And Locate spacing principles, feature simple and concise cuts, can be performed with great pace and above all can be “reactions” rather than plays.

When the goal is to pierce the dome as quickly as possible the methods do not need to be complicated or multi-layered.

These simple piercing sequences can take the offense from Create Phase to Locate Phase with pace and seamless flow under the direction of the players on the court.