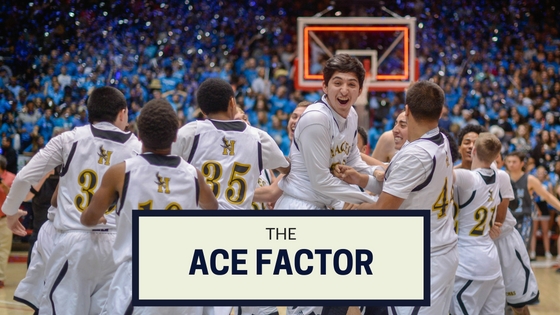 You’ve heard of the X Factor, correct? Defined as: 1. a variable in a given situation that could have the most significant impact on the outcome. 2. a noteworthy special talent or quality. Certainly a key championship ingredient, however, we (South Titan Basketball) are even bigger believers in the “ACE Factor”. This is the ability to control the controllables: A-attitude, C-concentration and E-effort. No matter what the circumstances, you have the power to control your attitude, concentration and effort. Let’s talk briefly about each:

Attitude – A settled way of thinking. Ours is a team first mentality. We over me. With this mindset, humility quietly leads the way. This is not thinking less of yourself, but just thinking of yourself less. Read that again and hide it in your heart. Our team attitude thinks of others first, it’s that simple. Maintaining this heart posture is the challenge. No matter what this silly game or life throws at us, we have the choice to always love others as we love ourselves. Chuck Swindoll is famous for saying:

“The longer I live, the more I realize the impact of attitude on life. Attitude, to me, is more important than facts. It is more important than the past, than education, than money, than circumstances, than failures, than successes, than what other people think or say or do. It is more important than appearance, giftedness or skill. It will make or break a team. The remarkable thing is we have a choice everyday regarding the attitude we will embrace for that day. We cannot change our past…we cannot change the fact people will act in a certain way. We cannot change the inevitable. The only thing we can do is play on the one string we have, and that is our attitude. I am convinced that life is 10% what happens to me and 90% how I react to it.”

Concentration – The focus of one’s attention. This is never a problem when the conditions are favorable. Basketball, however, is a lot like life and the conditions can change on us in a millisecond. These changes can distract us. Dan Rockwell says, “The power of focus is the power to ignore.” Let’s imagine you are at the Old Market (a historic neighborhood/shops/etc in downtown Omaha) riding in a carriage. Despite all of the traffic and noise that is going on around, your horse manages to stay the course and not get distracted. But how? Then you notice the blinders your horse is wearing. These blinders minimize 90% of the possible distractions. Allowing your horse to concentrate on what’s really important! We need to adopt this same concept when we compete and do life. Keep our eyes on the prize so to speak.

Effort – Hard work and careful planning. Also known as “industriousness”. John Wooden says, “There is no substitute for hard work.” And who’s to argue with coach. Hard work is such an elusive virtue. I believe humility is his brother. Once you think you have it you just lost it. In short, we can always work harder. Success equals effort over time. It’s not a destination. Staying power has a lot to say about who we are as a result of what we’ve done. Let’s close with another great quote by one of our greatest leaders, Theodore Roosevelt:

“In the battle of life it is not the critics who count; not the man who points out how the strong man stumbled, or where the doer of a deed could have done better. The credit belongs to the man who is actually in the arena; whose face is marred by dust and sweat and blood; who strives valiantly; who errors and comes short again and again because there is no effort without error and shortcoming; who does actually strive to do the deeds; who knows the great enthusiasms, the great devotion, spends himself in a worthy cause; who at best knows in the end the triumph of high achievement; and who at worst if he fails, at least fails daring greatly, so that his place shall never be with those cold and timid souls who have tasted neither victory or defeat.”