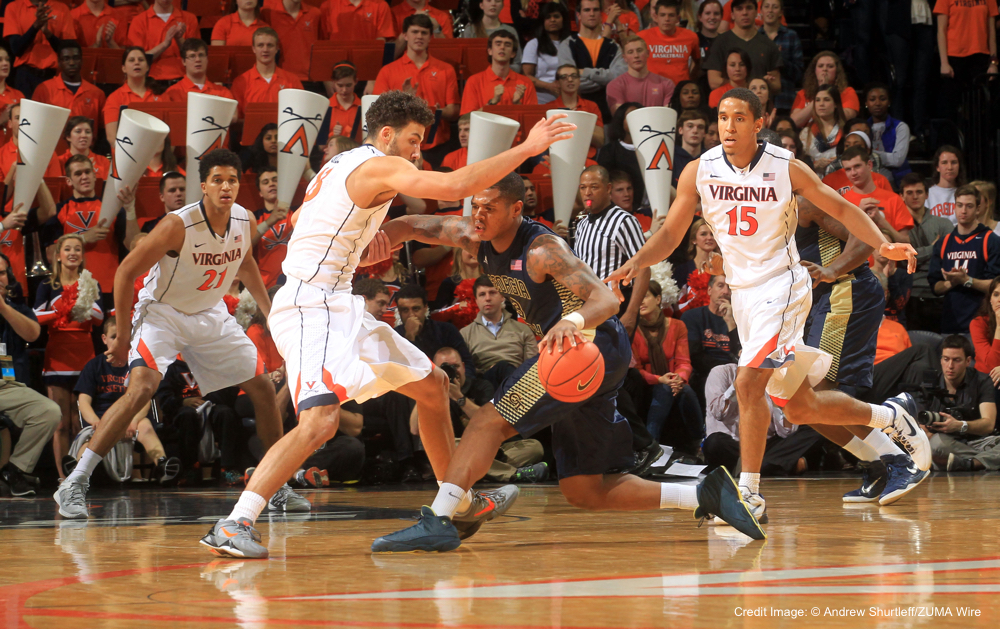 First in a series of pointers to help coaches find offense against the increasingly popular Pack Line style of man-to-man defense.

The Pack Line Defense is all the rage at many levels of play. For several teams, facing a well-schooled Pack Line opponent can feel like a trip to the dentist.

The defense can congest driving lanes and constrict space, thus making it difficult for teams to find easy baskets. But like any defense, there are trade-offs. In this series we will take a look at some “do’s and don’ts” when facing a Pack Line opponent.

First, let’s examine the basics of the Pack Line Defense. Knowing how it behaves may offer insight into how to defeat it. The on-ball defender picks up the ball aggressively at the “Pick Up Point” line and does so knowing his teammates are packed tightly behind him/her providing help on possible penetration. The on-ball defender is charged with pressuring the ball-handler to remove vision and leveling off drives to prevent straight line attacks.

Unlike pressure man-to-man, off-ball defenders do not deny passes when one pass away. They instead fill a gap and provide early help should the on-ball defender not contain the dribble. Their position creates a wall around the paint.

Above all, the Pack Line positioning is designed to keep the ball from penetrating the paint. With off-ball defenders in the gaps, players often are deterred from driving and settle for relatively harmless East-to-West passes while the shot clock works against them. Off-ball defenders guard “a man and half” meaning they are responsible for their man and helping in the gap one pass away. Typically they are positioned slightly closed but with vision of ball and man. They cannot be overly “ball-conscious” nor “man-conscious.”

In the diagram above X2 and X3 are “in the pack” to deter the drive from 1. The single gap spacing by the offense makes it possible for X2 and X3 to play in the gap for support but easily recover to their man.

One of the “don’ts” for Pack Line teams is the idea of not getting stretched. Players may want to stray outside the Pack Line or become overly conscious of their man. Since the Pack Line edict is “don’t get stretched,” our first Pack Line pointer is to stretch or enlarge the defense using double gap spacing.

All too often, the offense is guilty of using single gap spacing which allows on-ball defenders to pressure knowing the the tight gap is safely filled by a teammate that can successfully guard a “man and half.” Use offensive alignments with double gap spacing or create double gaps from single gap spacing by using cutters and dribble-at action. The goal of offense is to disorganize the defense. Tight spacing with no driving lanes makes it hard to do so.

Instead, use exaggerated spacing to widen the gaps and the turf the defender must defend. Enlarging the defense forces off-ball defender to defend more territory. Guarding a man and a half can become an either/or with double (or triple) gap spacing.

In the diagram above as compared to the diagrams with the single gap spacing, the defense is still inside the Pack Line, but there is more territory to cover. Giving support to the ball and recovering to your man becomes much more of a quandary.

The Pack Line thrives on teams with tight (single gap) spacing that allows them to clog penetrations lanes. All too often offenses oblige by remaining in single gaps and allowing the defense to guard a man and a half in an confined area.

By understanding that the Pack Line opponent does not what to be extended, seek to extend them. Force defenders to have to cover real space to guard a man and a half. Enlarging the defense and creating double gap stretches places far more dilemmas upon the defense that the compact single gap spacing.