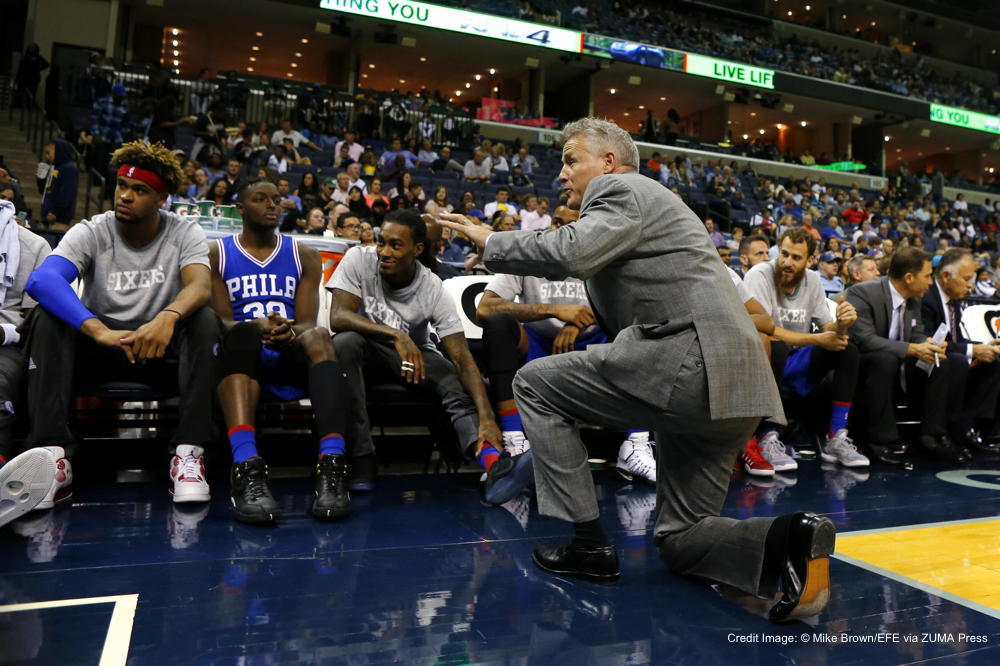 In his first game of the season Philadelphia 76ers coach Brett Brown ran two great out of bounds plays versus the Oklahoma City Thunder. The first is a sideline out bound plays that gets one of his skilled young players Dario Saric a nice look off of a dribble pull up. The second play is a fantastic deep corner baseline out bounds that the Sixers are able to convert into a three.

The first play is the sideline out of bounds play. Gerald Henderson inbounded the ball to Joel Embiid who handed it off to TJ McConnell. At the same time, Saric set a flare screen for Robert Covington who drifted to the weakside corner. After that, Henderson ran to the corner and then set a back pick for Saric who was just above the elbow. Embiid has worked his way down to the block and to set a second screen on Seric’s defender. Saric curled around the screen and caught the pass from McConnell. He then executes a dribble pull up while Embiid popped to the corner.

The next play is a situation few coaches are ever prepared for because it seldom happens in games but every coach should have one in their pocket. Brown was prepared and the Sixers’ benefited from his preparedness. The play started with Henderson coming off a back pick to the basket that is usually decoy unless the defense is sleeping. Richaun Holmes who set the pick popped out and got the ball from Sergio Rodriguez who immediately got it back and brought the ball up to the sideline. Henderson paused at the weakside block for just a second and his defender believed his action in the play was over but it was really just beginning. Both Covington and Saric are set up a double pindown that Henderson ran off of and gets a wide-open three. Coaches need to pay special attention to out of bounds plays; they are a quick way to set your team up to get quick scores. In addition coaches need to be ready for situations when the ball may be inbounded from an awkward position. Brett Brown had his team prepared and scored five points off of two great inbound plays.