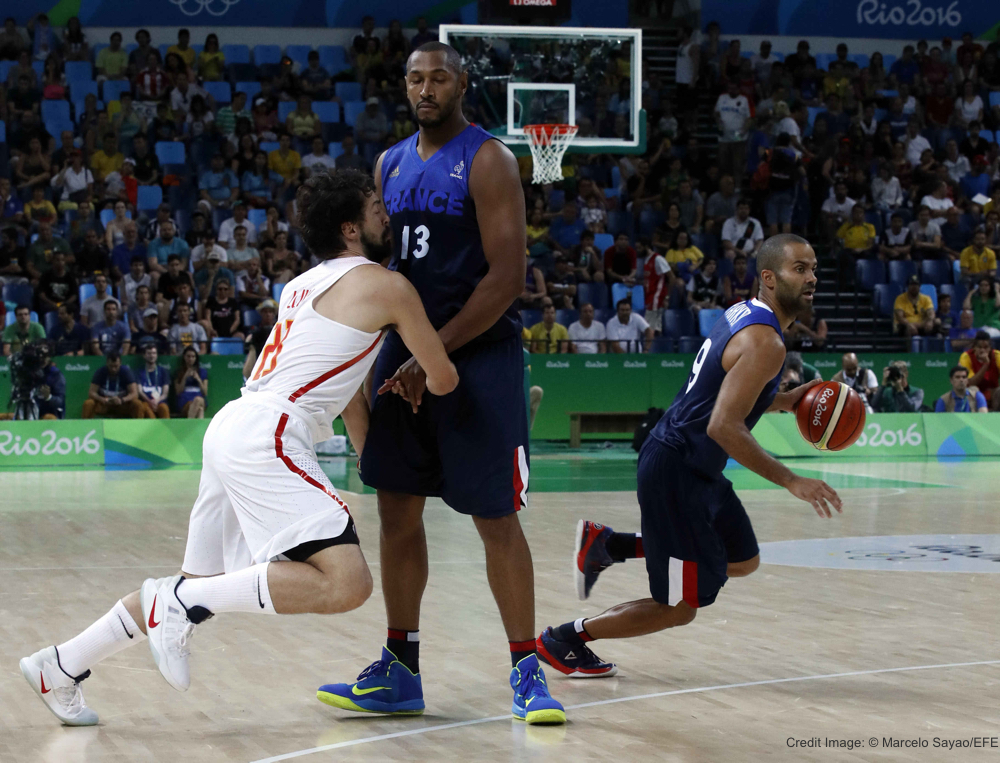 A pair of simple Horns actions to create enlarged gap space from Team France in international play. Use with your team for similar results!

One of the staples of international offense is the “Horns” alignment. There are boundless Horns sets and entries into offenses of all varieties.

Horns allows the offense to lift the defense and play through its “bigs.” Action can be initiated via the ball screen, elbow entry or wing entry.

International teams typically run Horns offense from a high and wide alignment with the “bigs” at or very near the three point line.The French National Team, with a cast of NBA veterans, uses Horns in a simple manner and with a clear goal of opening gap space in mind.

The following diagrams and clips will reveal how, with Horns actions, France creates gap space for players to attack.

France commonly uses the ball screen as the initial action in their Horns alignments, but it is the second ball screen that is the real catalyst.

In “Horns Get” the point guard, French superstar Tony Parker of the San Antonio Spurs, dribbles off the first ball screen and drags his man to the wing.

The screener cuts away wide to the sideline to space as the other lifted big comes over to “get” Parker open with a ball screen on the wing.

Parker then has a double gap (shaded area, Frame 3) to attack coming out of the ball screen. The screener rolls to the rim and the wing in the corner runs “back action” to counter his man tagging the roll man.

Below, France demonstrates this sequence against the Finnish squad. Parker is able to attack the double gap and get to the rim.

To open up even greater gap space consider the below variation of the same set.

After the first screener sets the ball screen and spaces away, they cut trough opening even more room for Player 1 to attack.

Horns can also force less mobile defenders to guard in space and France exploits this by using “Horns Wide Go.”

Forced to hedge on Parker, the Chinese defender is late getting back to Diaw leaving him free to attack in double gap space.

Upon the catch and go, Diaw must make the proper corner help read.

In the clip below, the Chinese defender helps uphill and Nicolas Batum back cuts along the baseline for an easy dunk.

The spacing screener must read the defense and make the correct decision upon the catch. Shooting on the pop is certainly an option, but here are some more possible reads.

These simple Horns actions and designs utilize simple ball screen concepts combined with attention to enlarged gap space. Together, they stretch opposing defenses forcing them to guard in space.

For more from Team France:

Check out this Team France Playbook, downloadable to FastDraw.