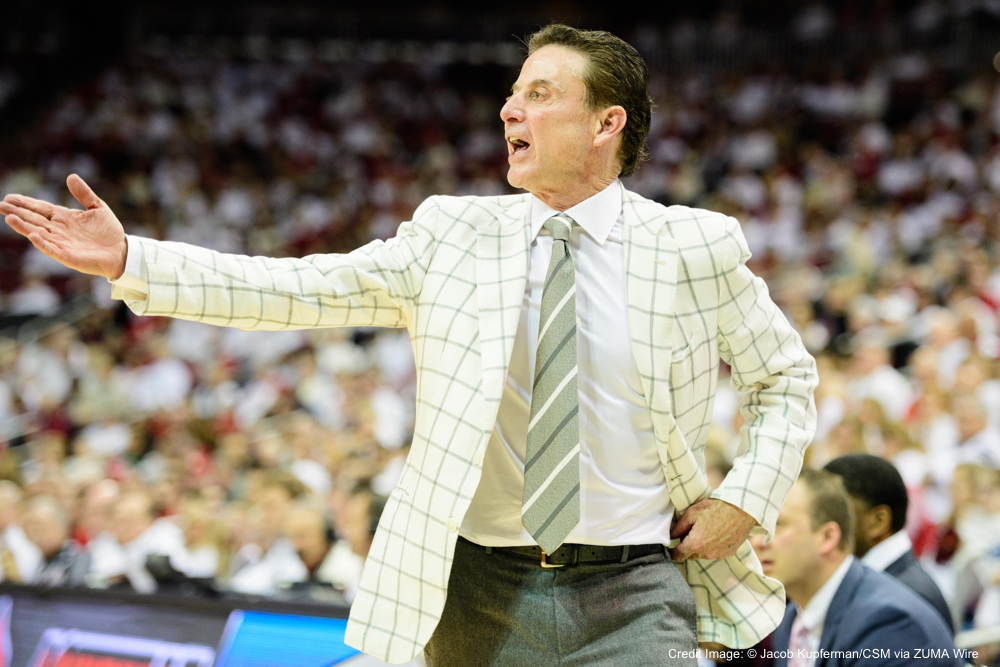 Inside The Attack: A look at the Louisville Cardinals zone offense and how they used the ball screen to create 2v1s against the Syracuse zone.

The Louisville Cardinals showed that the ball screen can be an effective zone offense tactic in their recent 76-72 overtime win over the Syracuse Orange.

The inside ball screen was effective in distorting the vaunted Syracuse zone and creating 2v1 opportunities on the backside upon ball reversal.

Let’s take a look these zone offense tips and go “inside the attack” used by Coach Rick Pitino’s Louisville Cardinals.

Louisville’s zone offense flows from the break with a bit of false motion. Using false motion to move players, move the defense and disguise the desired action can be helpful versus man-to-man or zone defenses.

Below are the Louisville false motion passes and cuts that lead to their inside ball screen scoring set: After using the trailer on the break and a couple of ball reversals, the ball returns to the hands of the desired trigger man for the inside ball screen. The false motion has brought the Cardinals to their desired alignment.

Once the Cardinals get into the scoring action, it is clear to see the 2v1 advantage created by the inside ball screen and weak side overload.

The inside ball screen forces the opposite top guard to pinch to seal the drive. A primary rule of the Syracuse zone is that the top guards do not get split with the dribble.

With shooters on the high wing and the corner, the backside forward in the zone is outnumbered 2-to-1.

In fact, the post “cracking in” on the center of the zone triangulates the defense. For this set to be most effective use a good shooter whom the defense will honor on the high wing to “hold the sideline.”  This places the opposite top guard in a dilemma. If X2 in the diagram above is reticent to help on the penetration, the gap shot may become available.

The ball handler may accept the ball screen and draw the attention of the entire defense. If the defense is sucked in and the forward, who is responsible for contesting the three point attempt, gets too high the corner player has a lob opportunity. X3 is concerned with getting to Player 2 holding the sideline and creeps up a bit too high. This presents the corner player, Donovan Mitchell, an opportunity to cut along the baseline for a lob.

If the ball handler’s attack from the inside ball screen engages a second defender, make the reversal pass to the player holding the sideline. It is X3’s responsibility to contest the three point attempt. If they are late the wing has enough of an advantage on the catch for a one count catch and shoot three.

Below we see a bit of the false motion, the inside ball screen, the post cracking in on the center and the one count wing three from Mitchell.

A well-timed crack in on the center can result in a post entry from the wing upon reversal.

Below we see the inside ball screen and the kick to a perfectly triangulated weak side.

Louisville center Mangok Mathiang cracks in on X5 and the entry is made for an easy basket.

If the zone defends the step in three from the high wing and the post entry, there is still the problem of the offensive player in the corner and the defense is vulnerable to the “one more” pass.

To insure the 2v1 weak side advantage, Louisville used a flare screen option to seal in the top guard.

Player 1 is able to engage the top guard by attacking from the ball screen and the kick out to the high wing coupled with the flare screen puts X3 in a bind. In overtime, Louisville guard Ryan McMahon knocked down a crucial three to even the score with a bit of the false motion into the flare screen option.

The Syracuse forward is hesitant to fully contest the three due to the presence of a Louisville player in the corner for the “one more” pass.

Louisville used the inside ball screen to create offensive advantages for not only the recipient of the screen, but several other offensive threats.

Pitino’s zone attack is structured with how the Syracuse zone behaves in mind and helped lead the Cardinals to a critical Atlantic Coast Conference road win.

Add these zone concepts to your Fast Draw library!