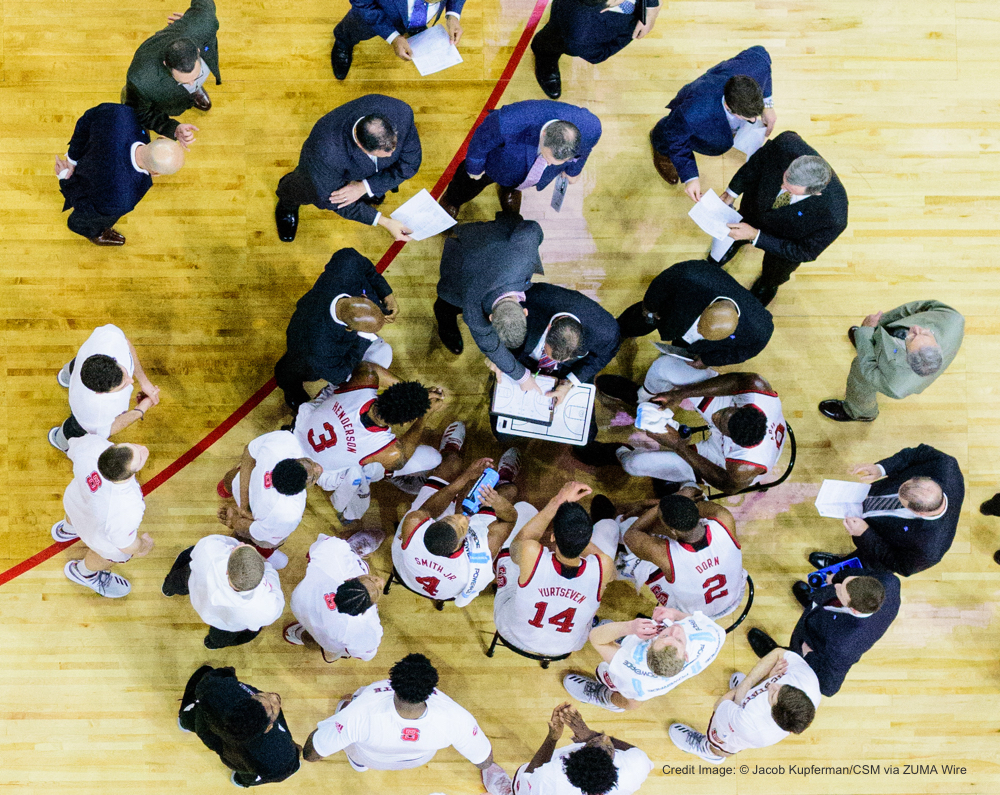 Self Scout to improve: Tough questions to ask of yourself, your coaching staff and your process before heading into next season.

If you are reading this at or near the date of publication, my hope is that the following questions do not have to be answered for a few more weeks!

If your season is over and the sting from coming up short of that state, conference or national championship is still fresh, it is time for some self-scouting. Next season starts now.

Basketball coaches have no problem with critiquing their players, their administrative support, their opponents or the officials. Can we critique ourselves or allow a peer to critique us and our performances with equal scrutiny?

At this point in the calendar, some introspection before next season and off-season workouts begin can be helpful.

Three Pillars of a Self Scout – Who Are We?

There is something they have in common. They know who they are and they have intentionally cultivated this identity. The players may come and go. Some go on to play at the next level while others simply graduate and move on.

In the professional ranks, players may retire, leave via free agency or trades. But in all of them, no matter the level of play, there is still a certain “sameness” to the way they play. Year after year, despite the departure of experienced players, not only do they win, but they do it in a similar fashion.

Take time to ask yourself and your staff:

An exercise we do with head coaches is the “Three Pillars” session. In this session we brainstorm some things with coaches about style of play, then whittle them down to three (no more, no less) pillars of play for their programs. These three pillars then become the guiding light for their programs.

These are not “back of the T-shirt” intangibles such as “Heart, Hustle and Togetherness.” Those are admirable qualities and every coach wants his/her teams to display them.

Rather, these are tactical decisions that we can begin planning workouts around. They drive every decision in practice planning, drill selection and scrimmage situations.

Here is an example of Three Pillars to use as a template:

Those three items help a coach plan every practice. They tell him/her what emphasize and prioritize on a daily basis. Everything we do in practice ties into these Three Pillars.

These are an example of one coach’s Three Pillars. Yours may be very different as you want your team to play a style that may differ from the pillars above. These three are not “right” or superior to any other three. You do not have to select these three, but select three.

More tough questions to ask yourself during a self scout:

The first step towards having an identity on par with the premiere programs you compete against is uncompromising commitment to your Three Pillars.

Perhaps the most influential innovation in the basketball world of late is the proliferation of analytics. Statistics can reveal some areas in need of emphasis in the off-season.

Self scout your numbers and see what they reveal about your team. Begin to look at the game through a “per possession” lens and ask yourself how can we win more possessions?

Basic analytics can shed light upon shot allocation, efficiency as well as the performance of opponents. Abundant information can be derived by looking back at your season statistics. Some of these measures may require you make a commitment to tracking new things for next season.

Here is a short list of the many statistical questions that can asked of your team that may expose some new points of emphasis going forward:

Turnovers are the undoing of many teams. You do not need the stat sheet to tell you that. They are the main detractor from PPP. Go back and look at every turnover and see if there are common themes.

Coaches can fall at different points on the analytics spectrum. Some are naysayers who dismiss analytics while others shape an entire program around the numbers. But a possible way to find a competitive edge for next season is to more deeply explore the numbers and their impact on play.

Often coaches seek something else – a new offense or an additional defense – during the off-season believing that if they just add these new wrinkles all of their team’s trouble will vanish.

With the advent of social media, YouTube and blogs (like this one) coaches are bombarded with XsOs, drills, ideas, etc. It’s easy to be distracted by the things we see other coaches doing.

But most of it is just “stuff” and the fallacy of “if a little is good then more must be better” is a pathway to mediocrity.

Coaches must come to terms with the idea of trade-offs. When you add, you must subtract. Practice time is the finite resource and adding another set play, continuity offense or quick hitter comes at the expense of something.

When you rehearse those routines in practice you are making the choice with that time that comes at the opportunity cost of the myriad of other things you could be working on. Too many coaches fall into the “we can have it all and be good at everything” trap. As a result they bog down in plays and easy-to-install patterns that do not truly advance the basketball know-how of their players.

So before you download a new XsOs book or purchase another instructional DVD hoping that within lies a secret tactic that will cause your team’s troubles to evaporate, ask yourself these questions:

Leave out the clutter and simplify. Groupthink leads coaches to believe that the better coach has the thicker playbook. Some are impressed by complexity but all are dazzled by well-executed simplicity.

The Blackberry has buttons and gadgets all over it, the iPhone has one button. Which one are people sleeping on sidewalks outside of retail stores to get their hands on the moment it becomes available?

Self Scout Next Steps

It is not too soon to begin addressing needed change. Begin formulating a plan for the evolution of your program, starting with a self scout.

Whether your team met all of their goals or fell short, do not remain idle this off-season and expect improvements to come. Be intentional, introspective and thorough in your evaluation of yourself, your staff and the state of your program.

Further educate yourself with related posts, such as this series on Cognitive Biases and how they relate to coaching: