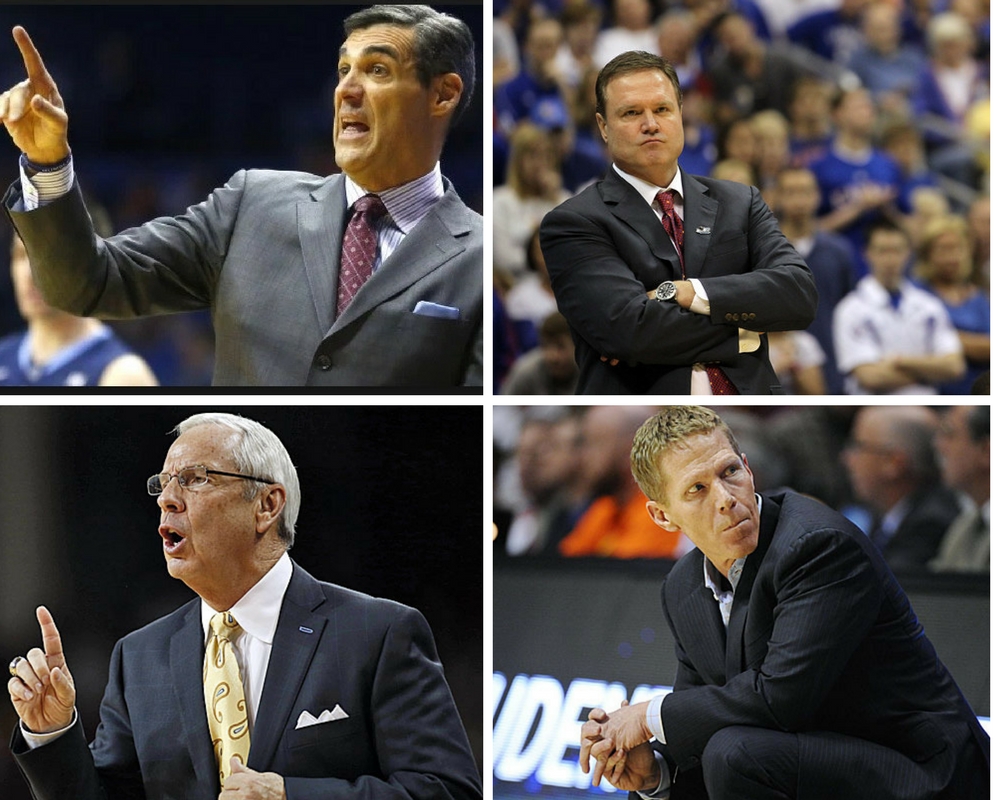 Villanova, Kansas, North Carolina and Gonzaga are the #1 Seeds in the 2017 NCAA Tournament. A look at that quintessential ONE thing each of them do well.

The 2017 NCAA Tournament is set and the madness begins soon. Villanova, North Carolina, Kansas and Gonzaga earned the top seed in each region. These are familiar programs to college basketball fans.

And like most top programs in any sport they each have a style of play that is branded into their identities. Let’s take a look at the ONE thing closely associated with each program.

Jay Wright and his Villanova Wildcats (31-3) will be defending their 2016 National Championship from the East Region. Their impeccable Four-Out Motion Offense again will be on full display. Villanova has a thin playbook and uses simple pass and cut sequences with ball screens concepts to create advantages for their players.

Their go-to ball screen concept is the “Deuce” and you will see the Wildcats use it liberally.

DEUCE uses the four-out spacing and first seeks to create an advantage for the ball handler then the roll man.

When defenses use a weakside defender to “tag” the roll man, Villanova is deadly with “Back Action” for a rising shooter.

Villanova has a simple yet lethal style where players use spacing and read the defense to find the best shot. The Four-Out Motion offense is the “one thing” the ‘Cats will be depending upon to repeat as champs.

The Jayhawks under Self have long been known for their High-Low Offense and they often use it to bang the ball inside. But this year there has been an evolution.

Self has evolved his position on shot selection and is allowing his guard-dominant squad to play with greater freedom. The result? The Jayhawks are on pace to have their most efficient offense of Self’s tenure. Longer and speedier cuts allow players like Frank Mason, Devonte Graham and Josh Jackson to use their attacking skills. Will this more free-wheeling style get the Jayhawks to Phoenix?

Roy Williams hopes his North Carolina Tar Heels (27-7, #1 South Region) can race back to the Final Four were they finished as runners-up by the slimmest of margins last year. And “race” is what they’ll do…

The Tar Heels “one thing” has been and will be their transition offense. The “Carolina Break” is the first thing opponents must have a plan for when facing the Heels.

With a hard primary push and a secondary break that is as iconic as the Jordan Brand on their uniforms, the Tar Heels come at you fast and keep coming.

Featured in the video above, the “Regular” option of the Carolina Break is the staple. South Region opponents will know it is coming, but preparing for the speed and pace at which the Carolina Break comes at you is another matter.

Mark Few and his Gonzaga Bulldogs (32-1, #1 West Region) display an international flair. Perhaps no team in the NCAA uses more concepts inspired by European and International basketball than the Zags.

Ranging from Horns to the European Ball Screen Continuity, Gonzaga borrows a lot of offense (and players) from abroad.

One common European concept you see from Gonzaga is “Turn Action” which serves as a bit of false motion to disguise ball screens. In Turn Action, the second screener in a staggered screen “turns” and ball screens for the cutter on the catch. The International flair of the Zags offense has propelled them to a one-loss season and a #1 seed. Will this be the year Gonzaga is propelled to the Final Four?

The four top seeds all have “one thing” or one style that is branded into their program. The tournament will provide challenges to Villanova, Kansas, North Carolina and Gonzaga. Which teams’ “one thing” will prevail?

For help with practice planning and implementation of a conceptual-based offensive attack join our community of basketball coaches!