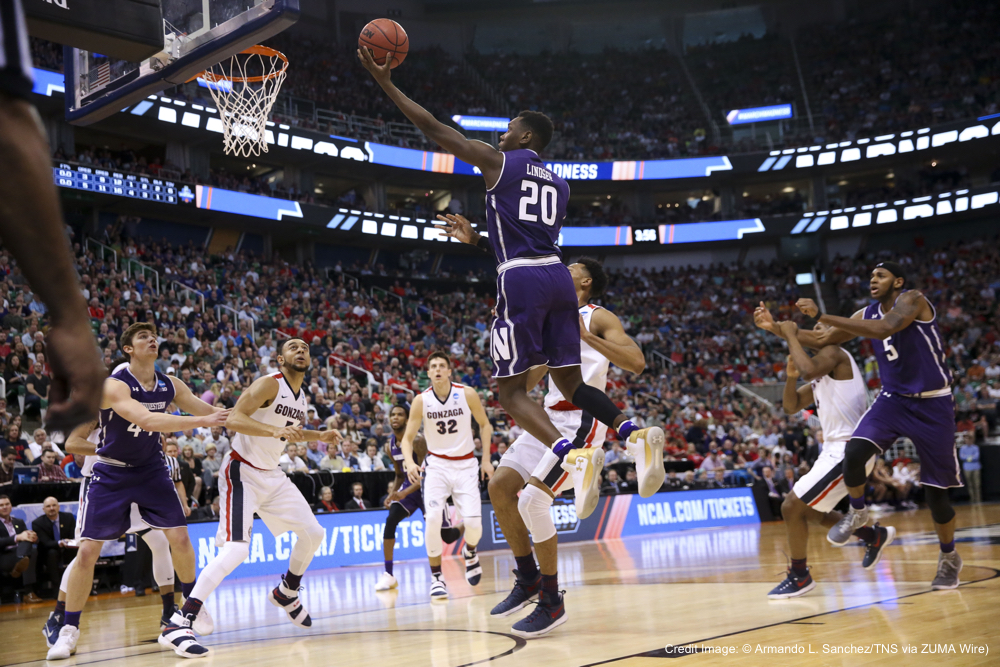 The first weekend of the 2017 NCAA Tournament was full of fantastic games, thrilling finishes, and some great #XsOs. Although there have been great plays run by all teams involved in the tournament, I want to specifically focus on the West region and some of the themes that I have seen from the teams in that region thus far.

The reverse action was made popular by legendary coach, Pete Newell. In this action, you have a back screen being set in which the cutter using the back screen finishes their cut with a back screen for another player. The first screener will pop out after screening to become the passer. West Virginia has specifically made use of this action in their round of 32 game against Notre Dame. There are a few components that make this such an effective action. The first element is that one defender has to guard multiple actions that happen very quickly. The player guarding 3 in this case has to tag a cutter off a screen and then immediately defend a back screen. The second element is the location of the ball in regard to the other off the ball players. By getting all of the players lifted above the FT line, you eliminate the help side of the defense, allowing for a good angle pass and open space to attack the paint with.

As is often the case, most action the is used heavily in the NBA trickles down into the college game, and this is certainly the case with the single side bump action. A single side bump occurs most often on a wing pick and roll where the ball side corner is filled. As the pick and roll occurs, the screener will roll to the rim while a shooter from the ball side corner lifts up behind the basketball. This forces the defender on the corner player to decide between tagging the roll man or staying attached to a good shooter lifting. In the set above you can see how the single side bump occurs at the tail end of the play as 4 lifts and 5 rolls to the rim. Additionally, this action is tough to guard because defenders cannot easily clog the paint by helping off 2 and 3, making x4 have to tag the roll from the back side of the play. As the ball handler utilizes the single side bump they should be reading the following:

Another action that has trickled down from the NBA to the college game in the 2017 NCAA tournament is the Spain Pick and Roll. In the Spain PNR the ball screen man receives a back screen from an off ball player to open up a clean roll to the rim for a scoring opportunity. Most times, this action occurs after some false motion in order to lull the defense to sleep.

In the action above, you can see how the Spain PNR sets up a high-low opportunity as well. The options are literally endless with this action. When teaching this action to your team, it is vital that you teach the screener who to screen, and also that you tell that screener to look to score after the back screen if their man leaves to help on the roll.

Getting the ball into the paint and playing inside-out is a must if you want to win in March. Many teams are now getting the ball inside via misdirection actions designed to put the post defender in help and then quickly duck-in on the defender while they are in help.

In the action above, a few elements are key. First, it is imperative that a solid screen is set between 5 and 4 in order to force help. If the screener’s defender does not have to give help, the action is less effective. The second element that helps this action is having the ball in the middle third of the floor. Through having the ball in this location, all of the options in the play are legitimate, and the defense must play honest.

Empty Side Pick And Roll

The final action that I have seen a TON of so far in this tournament is a pick and roll/pick and pop action on an empty side of the floor. This action is at its best when you have a dominant player that you want to isolate on a single side of the floor. Another good time to run this action is against a team that switches so you can attack the matchup after the switch with lots of space.

Once again, many teams have utilized false motion to set this action up and create the matchups that they want to be involved in the ball screen action.

While every good play that is run during the NCAA tournament may not be directly applicable to your team, I would encourage you to learn as much as you can and then adapt what you learn to better suit your team. If there is anything that I can do to serve you better, please feel free to reach out me on twitter (@john_leonzo). I would love to connect and talk hoops!

March 18, 2017 – Salt Lake City, UT, USA – Northwestern’s Scottie Lindsey (20) goes up for a basket during the first half against Gonzaga in the second round of the NCAA Tournament at Vivint Smart Home Arena in Salt Lake City on Saturday, March 18, 2017. Gonzaga advanced, 79-73. (Credit Image: � Armando L. Sanchez/TNS via ZUMA Wire)
Sharing
Authors