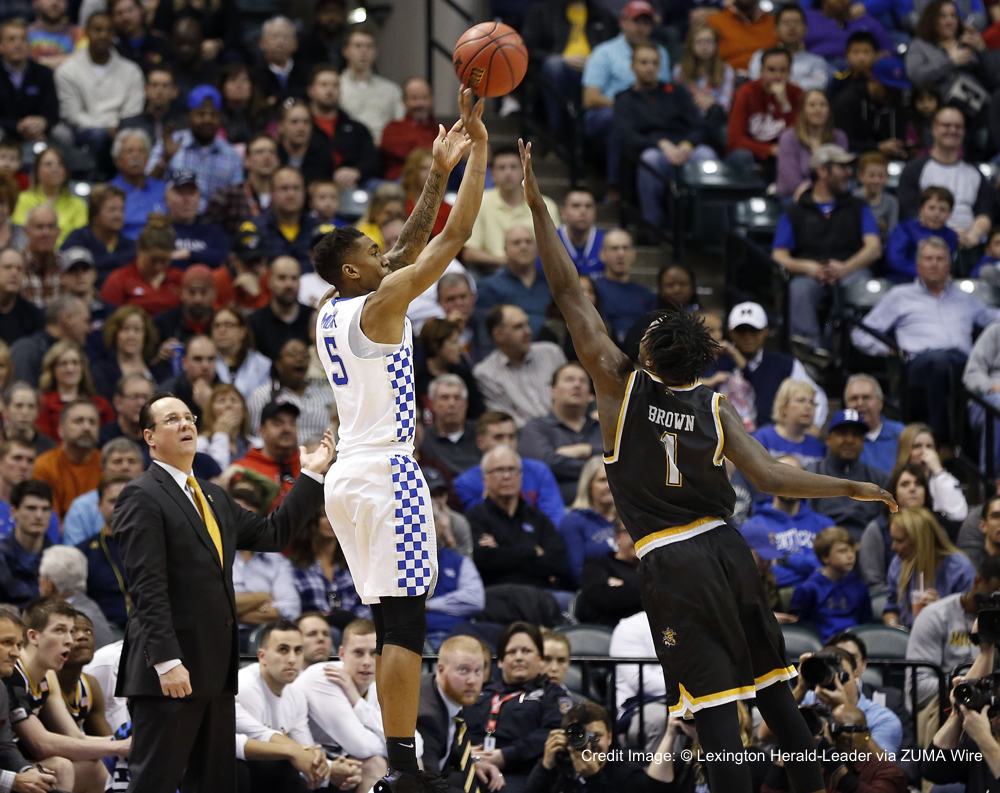 The first weekend of the 2017 NCAA Tournament was full of fantastic games, thrilling finishes, and some great #XsOs. Although there have been great plays run by all teams involved in the tournament, I want to specifically focus on the South Region and some of the themes that I have seen from the teams in that region thus far.

The Shockers may have lost to Kentucky in the second round and are a team known for their defense, but Gregg Marshall runs some nice sets. In particular, this back screen lob for their five-man gets open looks at the rim. The tenet of any lob set is the same – take away weak-side help at the rim. But what’s great about this back screen action is that if the defense snuffs out the back screen, the Shockers still have their best playmaker and point guard popping to the top of the key and a shooter spaced opposite him.

From the Wichita State – Kentucky game, the Wildcats were able to break free by getting their stretch-four Derek Willis some open threes. This action, a ball screen off an Iverson or Philly cut, was the perfect opportunity for a pick-and-pop. The 4-man pops to an empty side on the wing, where there’s no help, and his defender is already trailing after the big-to-big cross screen at the elbow.

One of the better post-ups run in the tournament came from Seton Hall, trying to get the ball inside early in their first-round game against Arkansas. Running it for big man Angelo Delgado, Delgado sets a down screen to start the play, then as action flows to the other side of the court, he comes off a cross screen from the point guard to get into post position near the block. What I love about this set is the multitude of options to score on before the post-up if the defense doesn’t play the action honestly.

#XsOs junkies need to watch this Middle Tennessee team’s run through the tournament and prior – they run some great stuff. Here is one of them, a ball screen set that quickly evolves into a double stagger for a shooter to come off on the opposite side of the floor. There are simply so many ways to score in this set… off the initial ball screen, on a high-low immediately after, attacking off a dribble handoff or on the double stagger for a shooter. The ball moves nicely from side to side and there’s a ton of movement away from the ball to make this action possible.

March 19, 2017 – Indianapolis, IN, USA – Kentucky Wildcats guard Malik Monk (5) hit a 3-pointer in front of Wichita State Shockers forward Zach Brown (1) as the University of Kentucky played Wichita State in the second round of the NCAA tournament in Bankers Life Fieldhouse in Indianapolis, In., Sunday, March19, 2017. This is first half action. (Credit Image: © Lexington Herald-Leader via ZUMA Wire)
Sharing
Authors