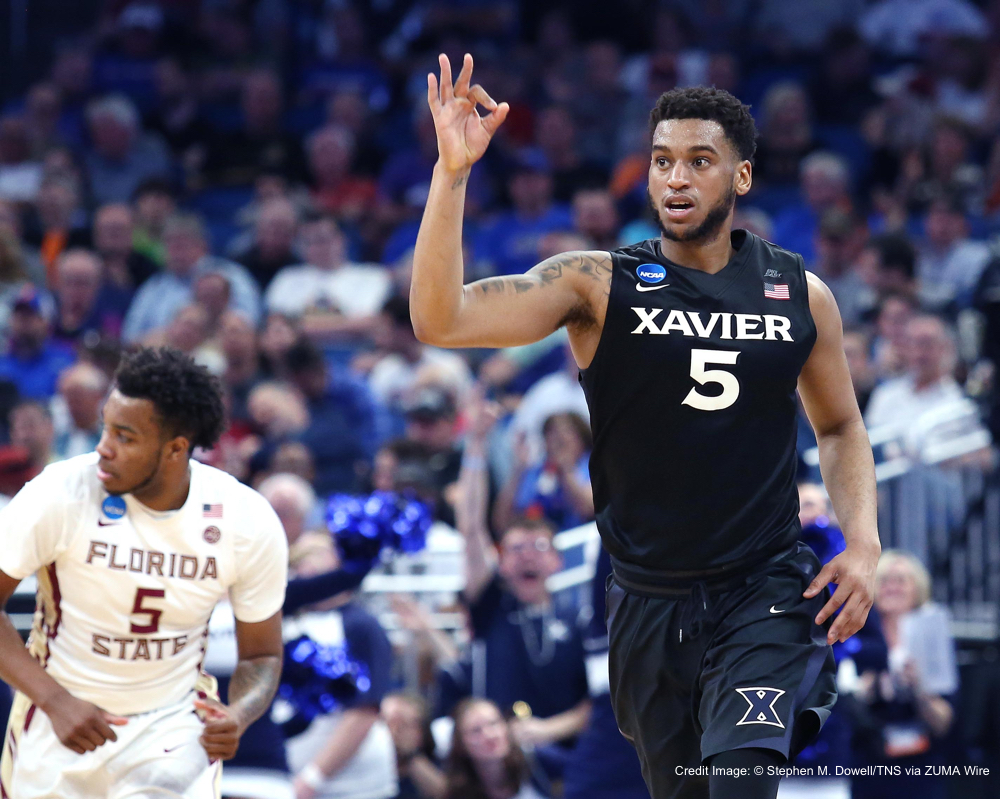 While the first weekend of the NCAA Tournament was full of exceptional basketball, I am anticipating an even better weekend as the sweet 16 and elite 8 games commence. The two games out of the west region will feature gritty defense, team offense, and a high level of passion and individual effort. Gonzaga versus West Virginia will be a great contrast between a deliberate and disciplined offense (Gonzaga) versus a frantic and frenzied press (West Virginia). Arizona versus Xavier will feature two great coaches (and former staff members) going head to head versus one another in a battle that will feature gritty pack line defense. Let’s take a deeper dive into the attack that these four teams will feature.

One of the elements that I like best about Gonzaga is how their offense is simple yet creates dilemmas for the defense that the offense can take advantage of. They do this primarily through ball screens and through misdirection post duck-ins.

The action above is a great example of how Gonzaga uses the aforementioned concepts. The first primary scoring action is the stagger set with players 1 and 4. Because 4 is the second screener, it is not an easy screen to switch. Additionally, because the stagger action is followed immediately with a high pick and roll, the defense is not afforded an opportunity to reset and regroup. A good rule for any offensive system is that “it is extremely hard to defend an action followed immediately by another action”, and this set places the defense in this dilemma immediately. Additionally, it is always a great strategy to make the opponents worst defender guard multiple actions.

The two post-up options that arise immediately out of this set are the initial post-up followed by posting up the roll man. The concept for the post player is to “push the position of the defender”. This will create space and passing angles. The perimeter players must then move the ball to the appropriate angle to get the ball inside. This happens both on the initial reversal, as well as on the throw back to high-low option that occurs after the high pick and roll. By using this concept you can ensure that the defense is always wrong regarding how they choose to guard the post. If they play behind, throw it in. If they play 3/4 over the top, toss the ball low to create a passing angle. If the are playing in front, reverse the ball to create the high-low opportunity.

It is impossible to talk about West Virginia without making mention of the terror that is their full court press.

Some elements that West Virginia employs that make this press so effective are extreme ball pressure, length, and athleticism of all players on the floor, and a “fake and bait” mentality amongst all players. Additionally, one of the best elements about the West Virginia press is the second efforts made by all the players if the ball is passed out of the first trap. Whether or not pressing is for you and your team, there is a lot to be learned in regard to defensive pressure and intensity from West Virginia.

No doubt about it, Arizona is one of the most impressive and well-coached teams in the country. One of my favorite elements about the Wildcats is their ability to use ball screens and spacing to create opportunities for their players to use their skills in space.

In the action above you see a set that looks very similar to the popular European Ball Screen Offense [FREE PLAYBOOK]. The purpose of any pick and roll/pick and pop action is to create an advantage for the offense, and the spacing of the above action makes the advantage possible. The first element that I like about this action is how all players are lifted out of the lane and the floor is spaced both vertically and horizontally. This spacing forces the defense to show their hand when helping, as well as creates an open paint for players to attack with the dribble, rolls, or cuts to the rim. Too often teams guard themselves by having poor spacing, but that is not the case with the Wildcats

I cannot say enough about how much respect I have for Chris Mack and his staff at Xavier. Living in Ohio myself, I have been able to see Xavier practice a handful of times and each time I walk away with some new takeaways and learnings. In addition to being a gritty defensive team, Xavier also runs some great Xs and Os to take advantage of their personnel. My favorite set of Xavier’s can be found below:

This is an effective set for a handful of reasons. First, all players are involved in purposeful action. Second, the ball is reversed and changes sides of the floor, Thirdly, all defenders have to guard. And lastly, the action attacks the defense in the paint first followed by the perimeter.  The DHO to throwback action that triggers the penetration that leads to the hammer action is a concept that can be applied to any team and any offense immediately.

One last note regarding this set is that as the DHO occurs, the two players on the perimeter act like they are going to start a flare screen action. By “having an act”, the off-ball defenders are sucked up higher on the floor, creating a good opportunity for the hammer action on the lower part of the floor. “Having an act” offensively is another concept that can be directly applied to any offense.

While the styles and personnel of all the aforementioned teams differ, they all share great fundamentals, excellent coaching, and superb attention to detail. Enjoy the games and please let me know if there is anything that I can do to be helping you!