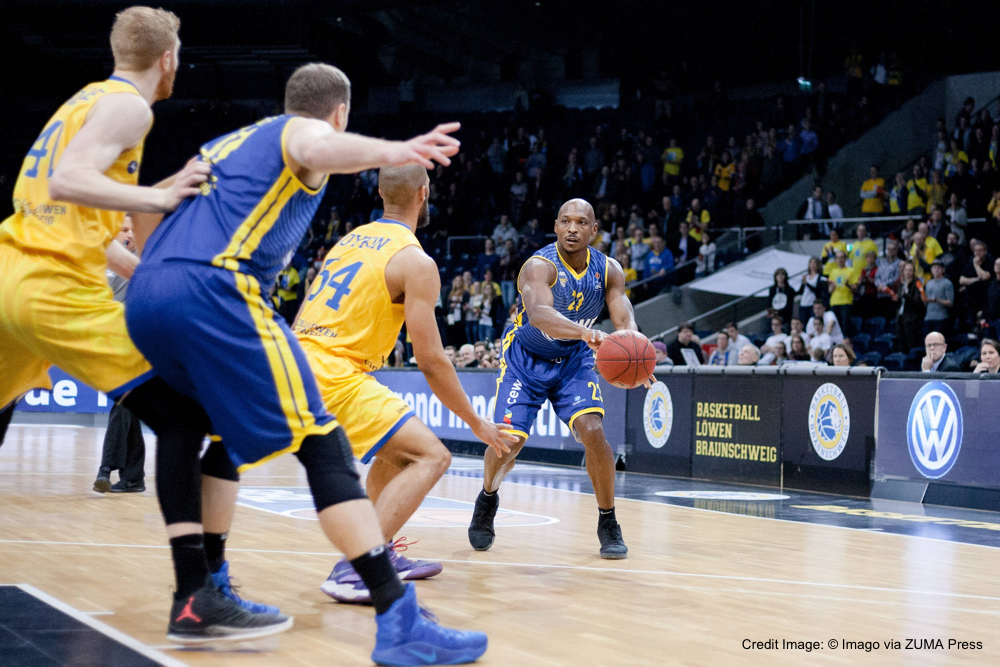 It is extremely difficult to defend a good post player on the block one-on-one. It is key to know how to double the post and just as important to know how to rotate out of that double team.

A team that has a full understanding of defensive rotations has an opportunity to be a very strong team on that end. Very few teams have five players they can put on the floor that will require zero help on defense. It is simple logic, when a team commits two players to defending the ball; they are leaving an offensive player open. Before we dive into the different rotations a team can commit to, let’s start with some terminology.

When a team has to double the post, there are a few different rotations depending how the offense plays off the post. For the first example we will assume the double team is coming from a guard. The first question is: which guard is going to double the post? An easy rule to establish immediately is if the post feeder stays in between the strong side elbow and the sideline than the double should come from X1. The thought behind this is that X1 should be able to close back out to the 1 quicker than the next player. X4 drops to the low HL but must be aware where the 4 is at all times. X2 should drop to free throw line and on the high HL keeping an eye on their man. Also X2 and X4 are there if 1 cuts down the middle, they can tag him while X1 is in the trap. X3 zones the weak side and is an equal distance between the 2 and 3, should the ball be skipped out to the 3. If the ball goes from the post to the 3 then X2, X3, and X4 should rotate directly to their assignment as the ball has gone from the SS to the WS. X1 and X5 should immediately occupy the high and low HL positions. Rotations get difficult if the 1 feeds the post and then cuts. So let’s assume the 1 enters the ball into the post and then cuts to the WS corner. X4 can tag the 1 as they cut but should remain at the low HL position. X1 will go with the 1 and stop at the WS key. As the 2 will slide over, X2 will become the one responsible for doubling the post. The defense is willing to concede the pass to the 2 because it is the easiest to recover to. The second rule defines who is rotating where. In the previous example X1 rotated to the 1 because he was in between the SS elbow and the sideline. If the 2 passes the SS elbow then the first example of rotations is intact and X2 will rotate to his man. If the 2 does not pass the SS elbow then the rotations are different. In this situation the ball is kicked out to the 2, and as the offense swings the ball, X3 takes the 2, X1 takes the 3, and X2 leaves the double team and sprints to the 1 in the corner. Whoever doubles the post will have the longest distance to cover but should be able to get there as the ball is swung. An adjustment can be made, and teams could have X4 take the corner and X2 rotates to the 4 if the team is comfortable with the match up.

Rotations are extremely difficult to nail down and teams must drill constantly to make sure there is an understanding of who is rotating. The other factor that makes these rotations work is constant communication. The best defenses are constantly talking and communicating with each other. Another note when practicing the rotations, it is important to have all players practice every position in the rotation. It helps them learn what their teammates are doing but situations may occur where they will be in position.