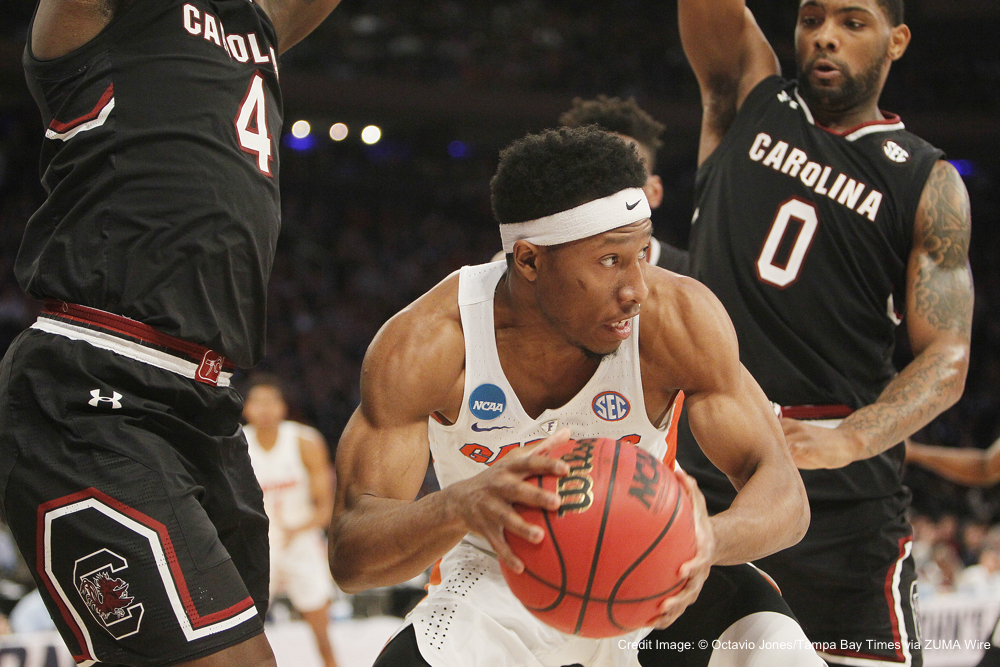 With the help of suffocating Pressure Man Defense, the South Carolina Gamecocks have scratched and clawed their way to the program’s first-ever Final Four.

Take a moment to learn a bit about what life is like for a tiger who lives in a zoo and one that lives in the jungle.

You see, Martin knows you coach your team like a zoo tiger. You feed them plays and patterns and dictate their every cut, screen and shot. You are convinced that from the sidelines you can control the chaos. You’ve worked hard to harness your player’s natural aggression and caged them up inside the comfortable structure of your offense. You have tamed your players.

He knows the lovely precision with which your offense can operate due to hours of running through it on air, in tidy breakdown drills and against “dummy” defense. He also knows that because of this, your offense and your players cannot survive for one day in the jungle for they have forgotten how to be or never learned to be a tiger.

This is a look at how Martin, his brand of defense, and his team of tigers force opponents to survive a no-holds-barred cat fight.

It starts with the pick up point. You see, when you play another team of zoo tigers they allow you to comfortably bring the ball into the scoring zone. Not today… Now you have a fight on your hands. You’ve played 33 games and in those games you’ve been able to leisurely walk the ball to the exact spot on the diagram so you can signal the offense. Not today… The other 33 opponents were so scared of you (after all, even though you’re a zoo tiger, you’re still a tiger, right?) that they let you do it for fear of you beating them. Not today…

Your eyes have to come down to concentrate on the battle at hand. Sure, your teammates have made their cuts on command. They’ve dutifully popped out to the wing or cut off a screen like they have hundreds of times this season, but today they are not open. Today the ball cannot see them. You’re too worried about the tiger in front of you to even worry about them anyway.

You hear the scream of your coach’s voice is ringing in your head. “RUN THE PLAY! RUN THE OFFENSE!” Not today… You have a tiger in front of you pushing you toward a sideline checkpoint, you try to take it somewhere else (the other tigers always let you) and he corners you forcing you to where HE wants you to go. Quite the cunning hunter. You see, today you’re in the jungle, not the zoo. This is his domain.

You’d love to just get rid of the ball and pass it to someone but, alas, nobody is open. You cannot reverse the ball (I wish I could, coach loves when we reverse the ball. He’s shown us stats about how good it is for our offense) but there is a tiger there too. He’s denying the swing spot like his life depends on it. (It does…) Panic sets in. Fight or flight? I can persist and dribble the ball 25 times and fight for our offense while someone, anyone (please!) tries to get open.

You choose flight. You take off, that always works (hope Coach doesn’t get mad that I’m not running the offense). You’ll just go to the basket without a plan.

Someone will always bail you out by helping off ballside and I can pass to their man for a three (after all, coach has shown us that catch and shoot threes yield 1.2 PPP for our best shooters).

That’s the plan, drive it and kick it for a three. Not today…

You drive to the basket knowing that someone, probably their entire team, will collapse on the drive and give you an easy pass to multiple available teammates. But today, this tiger is right on your hip while you’re driving trying to push you to the corner. All the other tigers you’ve faced just open up and let you blow by them and cry for “help” from their teammates. Not today… You take a second and a third dribble and no help has come and this same tiger is still right on your hip. This tiger is made of something different.

A BIG tiger rotates over snarling in your path to the rim. You leave your feet in the midrange area, maybe if you jump you’ll see someone open. Oops, you jump, nobody is open. Better shoot it before you land. Maybe it will go in. Not today…

Next trip. There’s that tiger again, waiting for you with fangs exposed at the halfcourt line (so annoying, and I’m getting really tired). Whew! Here comes a teammate cutting to get open way beyond even the NBA three. You pick up your dribble to pass to him, nobody denies out that far do they? Oops…

You just want to pass the ball to another zoo tiger. You need the next pass to happen so you know what to do. You want to pass it to this guy so you can go screen for the only guy on your team who has a little jungle tiger left in him. The jungle tiger knows that in your fragile offense passes trigger actions. You need the pass to get to the action. Not today…

That may have gotten you victories against other zoo tigers, but this isn’t the zoo. Not today…

Gonzaga, North Carolina and Oregon may emerge from the Final Four cat fight victorious. If they do it will be because they remember that in their DNA they are tigers. They will be forced to make plays.

Their instincts must take over. They must remember what they are. For on this night, against these Gamecocks behaving like a zoo tiger means you do not survive. They won’t allow it.

For help with practice planning and implementation of a pressure man defense, join our community of basketball coaches! Check out our online course – Pressure Man-To-Man Seminar – as well!