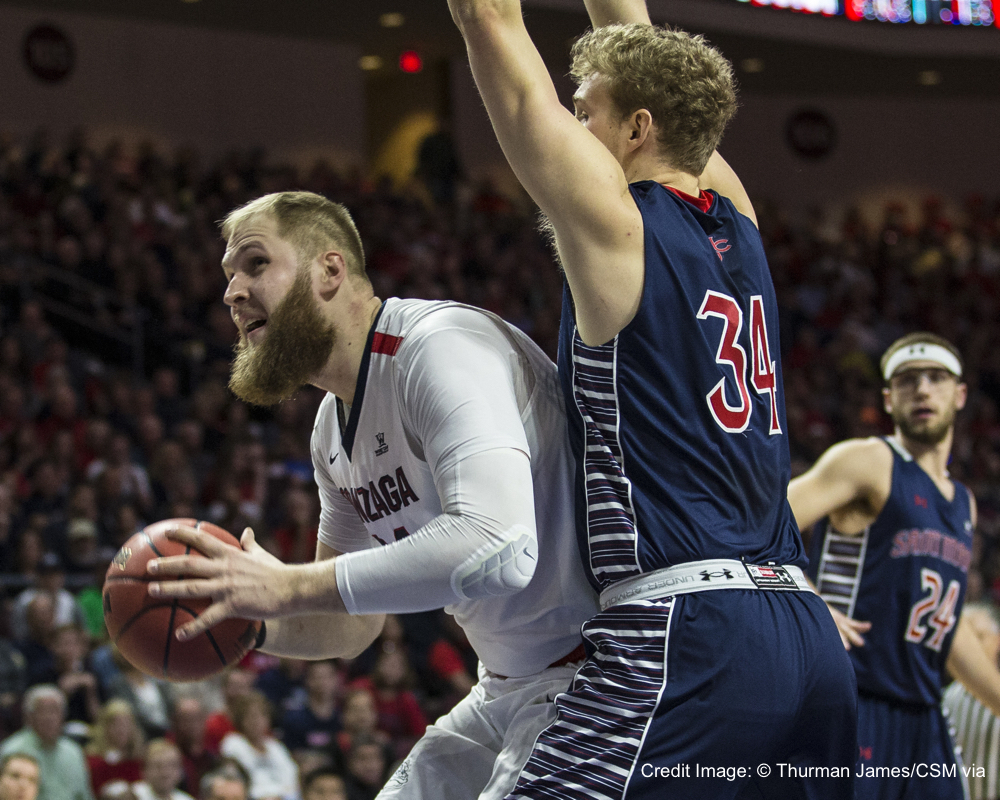 Below you will find a video made by Jon Giesbrecht (follow him on Twitter) on the many ways that the Zags take advantage of teams in the post:

As you can see from the video, playing through the post (almost a lost art in today’s game) is a very important element of the Zags offense. The two concepts from the video that we will breakdown a little more are:

One of the most effective ways to get the ball to a post player is to have them seal out a defender who is in help-side. In order to do this, the post player must be opposite the ball so that their man slides away and gets into help, and then when the ball is swung back to their side of the floor, they are sealing on the air-time of the pass. Additionally, this concept of the “timing seal” can apply to situations where the post-up man is screening for a teammate. We can see this in the “curl duck-in” action that Gonzaga has used in this NCAA Tournament.

While the ball is not opposite the post in this action, the timing seal concept still applies. The timing seal aspect of this play occurs when 5 is setting the flex screen, forcing x5 to help. It is when 5 feels their defender leave to bump the cutter that they begin their seal.

With ball screens being such a huge part of the game today, it is imperative that teams use them in such a way to best take advantage of their personnel. Gonzaga takes advantage of their personnel by sealing hard after rolls to the rim. The majority of the teams look to the roll man once (during the actual roll), but Gonzaga takes another peek back at the roll man by having them seal after completing their roll to the rim. Let’s take a look at two plays that the Zags utilize to get multiple looks at the roll man. In addition to giving the offense multiple looks into the post, the turn action can be tough to defend because the first defender responsible for hedging the ball screen has to guard a lot of action. Good offensive coaches place certain defenders in “dilemma” situations where they have to guard multiple actions and make multiple decisions. This occurs in the turn action by having x4 guard a stagger screen, a ball screen, and then deal with a sealing 4 man. Talk about tough!

The roll first and seal second concept can be seen after the high pick and roll. By lifting 5 and sealing 4, you have an automatic hi-low opportunity off the pick and roll. Additionally, the timing seal concept can also be seen by having 4 duck in as the 5/3 ball screen is being set as well.

Again, the same concept of rolling first and sealing second can be seen in the Horns Bump play as well. If the first look at the roll is not open, the ball can be thrown back to 3 behind the play for a shot or post feed. Additionally, if the defense hard hedges the 5/2 pick and roll, 2 can quickly advance the ball to 4 and then 4 can feed the ball inside.

While there is so much more that makes Gonzaga an elite offensive team, their post-up game and sealing concepts set them apart from most teams in the NCAA. While your personnel may differ from the Zags, the concepts of using misdirection and timing to create post-ups can be directly applied to your team.

My encouragement to you is not to steal the actions from the Zags, but rather to examine your own offense and apply the concepts within what you are already running. Don Meyer once said the teaching must be “sound, simple, and succinct.” I believe wholeheartedly that this is great advice to follow! Enjoy the games, and feel free to reach out to me on twitter (@john_leonzo) if there is anything that I can do to help you!