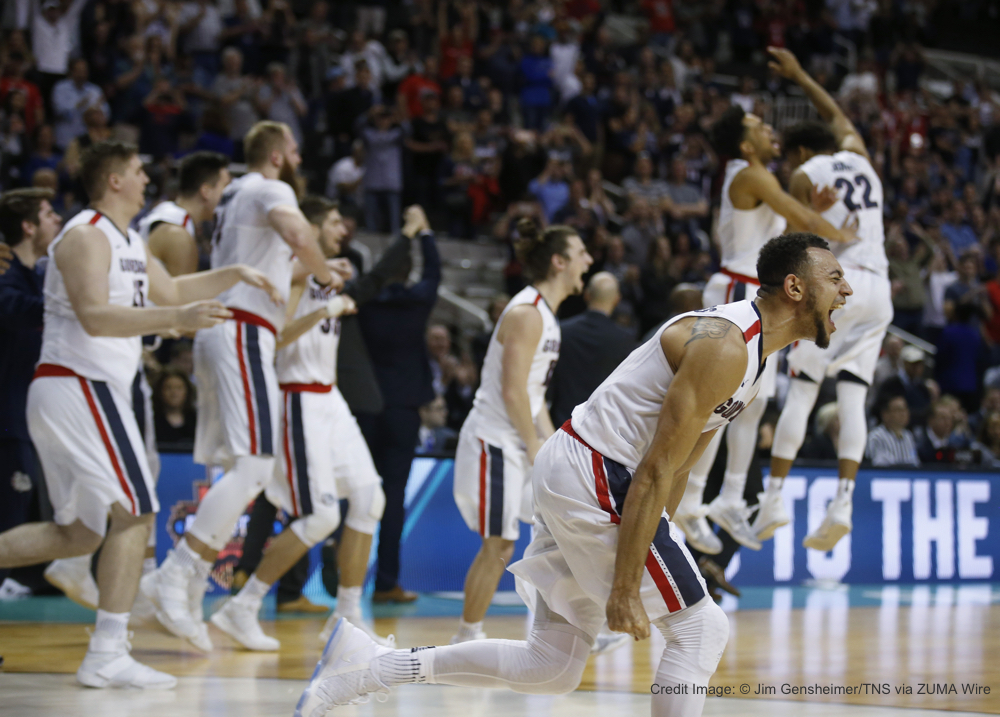 Gonzaga has rolled to their first Final Four and Championship Game in program history. Handling pressure has been a key to Gonzaga’s success this season.

As we prep for the national championship game, I wanted to take some time to talk about how Gonzaga attacked the pressure of South Carolina’s Pressure Defense in the Final Four game this past weekend. Teams that play at a high level not only handle pressure but use it to their advantage and make the defense pay for playing that style. Gonzaga did this with a few different concepts that we will see below.

False Motion Prior To Pick & Roll

False motion can be a great way to get the hedge man off the screener prior to a pick and roll action occur. Gonzaga did this on the first play of the game by having Karnowski set a back screen prior to ball screening. This forced Karnowski’s man to help, even for just a second, making it very hard to hedge hard and blow up the high pick and roll with an aggressive hedge.

Spacing And Back Door Cuts

The second way to utilize and use pressure to your advantage is to clear the paint with off-ball action and then have a cutter attack the rim by going back door. This was the first play that the Zags ran out of halftime. The double screen and curl action sucks up the two defenders guarding both forwards, creating an open lane. Additionally, the spin dribble by the point guard to quickly get away from the action and face the cutter is essential. This is a great way to attack a team that thrives in denial.

Have Your PG Inbound The Ball/Start Press Break Higher

The other adjustment made out of the press break by the Zags was to begin their break above the 3pt line. This forces the defense to guard more space, as well as gives the offense room to cut to, making it easier to inbound the ball versus pressure. Regardless of how you break a press, both concepts can help your team instantaneously.

Handling pressure is key to being a good basketball team, and the Zags do it very well. I hope that the ideas and concepts discussed above prove to be helpful to you and your team in the future!