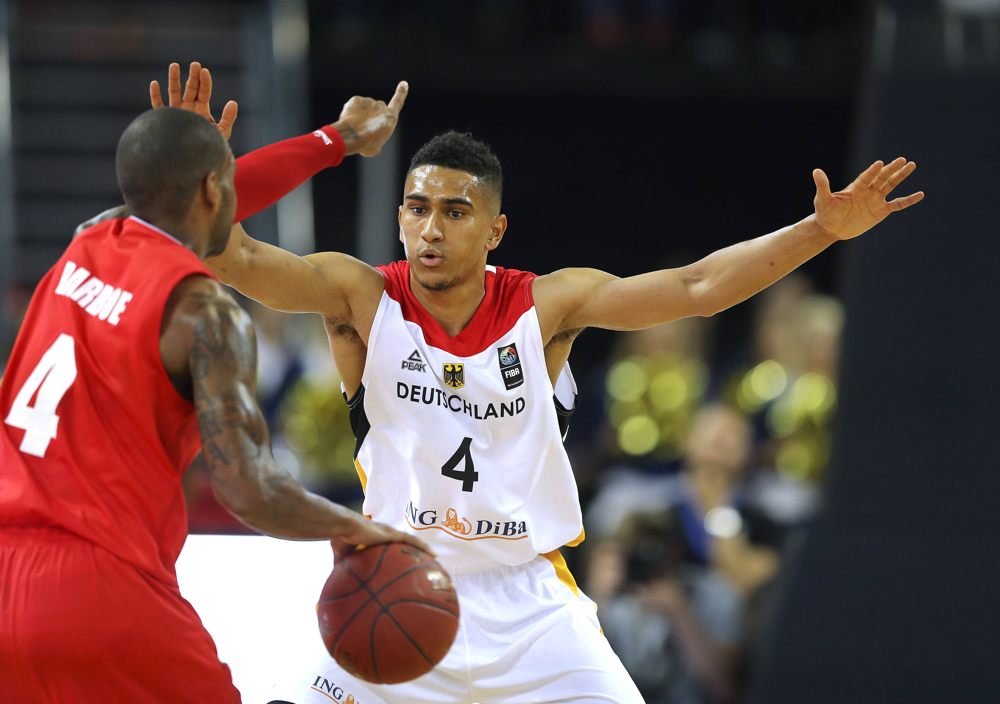 Drills for On and Off Ball Defense is part 2 of a 5 part series on drills that can help any man-to-man defensive system. Read Part 1, Man-to-Man Defense – 2 Essential Questions here.

In this first post on building a comprehensive drill package for any man defense, we are going to look at two drills used to reinforce guarding the ball and increasing defensive vision and awareness away from the ball.  Both of these drills can be used in season as well as during the off-season.

Drill Set-up: Split your team into groups of two and line them up on the baseline.  A coach will be at the top of the key on the other end of the floor. Drill Set-up: Two offensive players 1 and 2 in the slot and wing position and two defenders X1 and X2. Players 4 and 5 can be players, coaches, or managers.

On coaches whistle or command “exchange,” the offensive players exchange spots and both X1 and X2  open up, jump to the ball and fight thru exchange 1 player removed. After players exchange, coach passes to player in the slot and both defenders assume guarding position. X1 closes out with high hands choppy feet yelling “ball” and X2 sprints to help or deny depending on your defensive philosophy.

1 passes back to player 4 and again exchanges with offensive player on the wing and both defensive players open up, jump to the ball and fight thru exchange 1 player removed. During any point in the drill when the coach has the ball on the wing he/she may pass to the corner and the corner player drives the ball hard to the basket.

The low player in the help side “I” meets offensive player outside of the paint and the top side “I” defender helps the helper and takes the hoop. The offensive player or coach passes back out to either offensive player 1 or 2 and then the defense must closeout and play live. X1 an X2 must communicate and scramble accordingly. X2 takes 1st pass out and X1 sprints to help.

Both of these drills will help you and your players become better at not only guarding the ball, but improving vision away from the ball.

Up Next: Two new drills targeting post defense and helping the helper:  4 on 4 backside and 3-guard 4 disadvantage