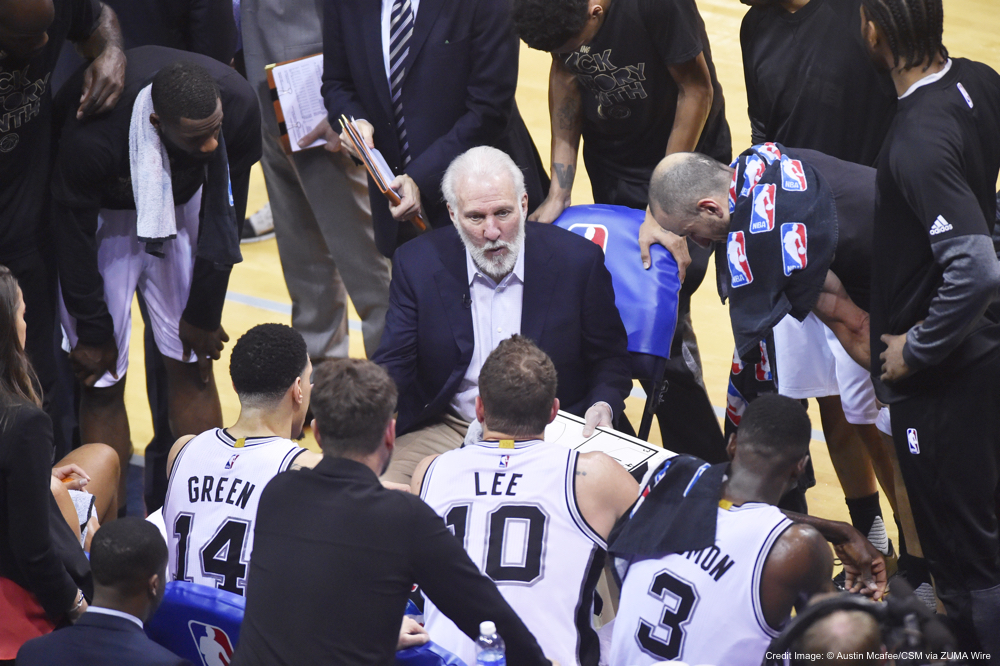 Coach Gregg Popovich and the San Antonio Spurs entered the 2017 playoffs with the 2nd best record in the league and are considered serious contenders for the NBA Championship. Coach Popovich has always run great X’s & O’s and this might be one of his best coaching jobs of his hall of fame career.

Here are 5 of Coach Popovich’s best sets of the 2017 NBA Season:

A staple of the Coach Popovich playbook, the Hawk action is code for a side ballscreen occurring at the same time as a double stagger on the opposite side. It’s a ballscreen that occupies help. In recent years the Spurs have run it with Kawhi Leonard as the ball screener, hoping he can pick-and-pop and isolate off of it. The San Antonio Spurs have some great passing big men this season — David Lee, Pau Gasol. Coach Popovich gets the ball into their hands at the free throw line and lets cutters and screeners move around them. Screening and cutting is dependent on personnel and what spot they are in — usually they are trying to get the ball to Kawhi Leonard.

While it can change based on personnel and spots, the objective is to get an action similar to their Motion Weak offense out of a dribble handoff set. They push one player backdoor and raise another, hoping their defenders run into each other. There is also an easy counter to cut backdoor if the defense snuffs it out and denies the pass.

A counter to the normal Floppy set, this is an action Gregg Popovich and the Spurs run out of timeouts to get LaMarcus Aldridge an open mid-range jumper. Since his defender is not used to guarding shooters and getting through screens, it is a particularly effective action.

Common set from Gregg Popovich to get an easy basket for his big man in the post. The Spurs run this frequently out of timeouts as a counter to their Philly (AI/Iverson) sets.