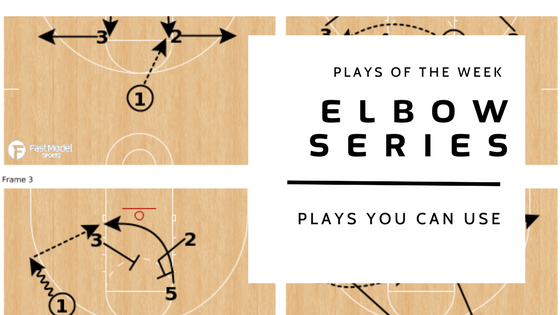 When building your playbook for next season, some things to consider:

These are all challenges that coaches must consider, and do not realize until they face the best teams on their schedule. The “Elbow Series” below is an example of some sets that check all of the necessary boxes, which make them a solid addition to your playbook.

Do the sets all start from different formations?
The Elbow Series always starts from a box set. Guards at the elbows, with the bigs on the blocks. This makes it difficult to defend, as there is no immediate giveaways for the defense. Below is the basic Elbow Action; Is it difficult to flow from the base offense, into the sets?

The Elbow series is very easy to flow into, from any base offensive formation. Below is an example, using a 3-out, 4-out, and 5-out system.

Do the sets all use the same actions?
The Elbow Series uses multiple actions. Some of these actions include back cuts, flare screens, screen-the-screener actions, Iverson cuts, screens for post-ups, and elevator screens.

Do the sets lack versatility?

The Elbow Series includes options to get a post touch, open 3-point shots, back door cuts, isolations, ball screens, and even a lob play. Let us know what you think about the Elbow Series. Contact us on twitter or in the comments below.