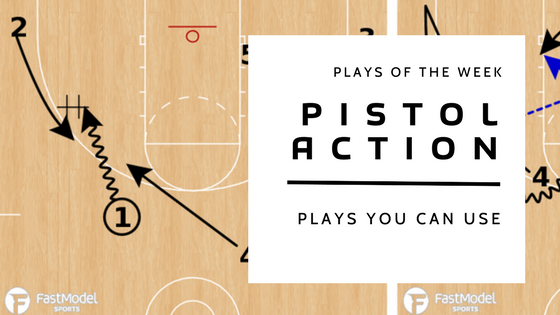 The Pistol Action has become a popular action for teams to run in transition. Depending on the team that you are watching, you might see different versions of the Pistol Action. This past season, we initiated our Pistol Action with a dribble hand off. Below are some key teaching points, as you introduce Pistol Action.

Below is a diagram of our version of the Pistol Action. Another important part of building your team’s transition playbook is developing your counters. These are wrinkles to the basic action, which keep the defense off balance. Below are three different counters to Pistol.

PISTOL PUNCH – This counter utilizes a fake dribble hand off, to get an easy post entry. On the fake, the post player (5) should “punch,” or cut across the lane. The trailer then sets a flare screen for the wing. The timing creates a nice read, if your post player is unable to score. Lastly, on a pass out from the post, both sides of the floor are set up for a “one more,” which is an extra pass to the corner. PISTOL INVERT FLARE – If you watch the Cleveland Cavaliers, this is their version of Pistol. They set an invert wing ball screen, into a flare screen. The flare screener follows into a wing ball screen. This action is terrific if teams are overplaying, making the dribble hand off difficult. It is also a nice way to keep the ball in the hands of a dynamic point guard. PISTOL HAMMER – This counter was featured in my first blog, “Late Game Situations: Need a 3.” Kentucky ran it in the NCAA Tournament, and I have added two more screening actions, after the Hammer Action. In this set, the guard fakes the dribble hand off, and attacks the baseline. The Hammer Action is ran on the weak side. If the shot is not there, your team can continue into a double stagger screen, followed by an elevator screen. As the Pistol Action has become more popular, countless teams are developing creative ways to add their own wrinkle. We would love to hear your thoughts about these counters, as well as anything else that you might add. You can reach us on Twitter, or e-mail Coach Doug Brotherton at: CoachBrotherton@gmail.com