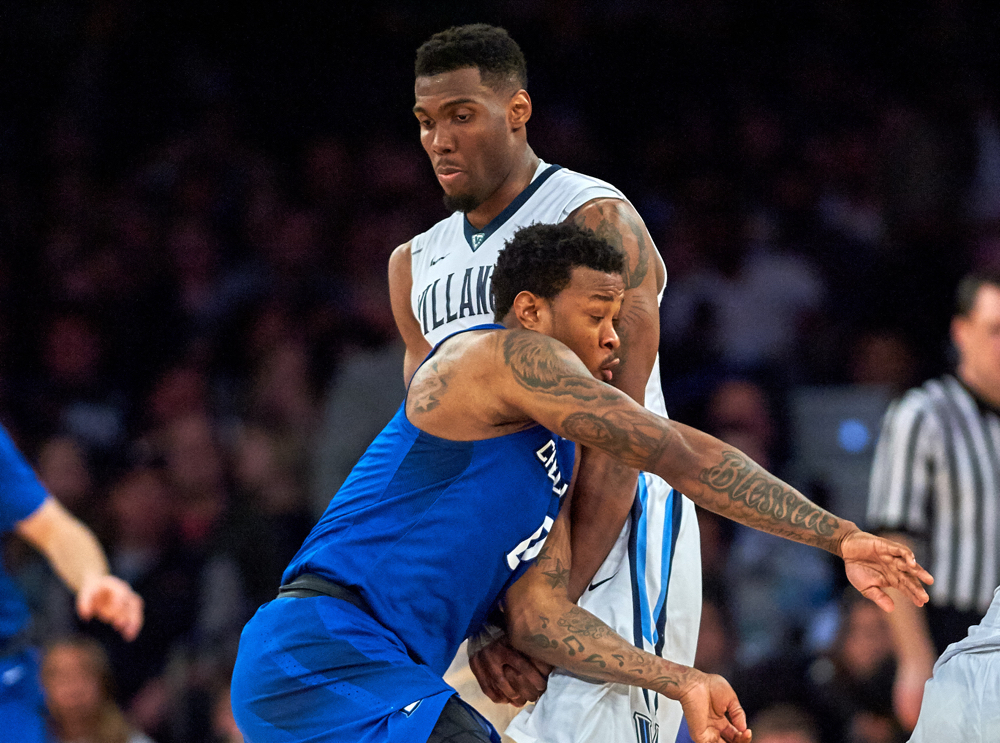 Drill set up: Four offensive players positioned on the blocks and slot areas. Four defenders matched up with offensive players. We use this drill to teach how we defend different types of screens (down, back, flare, stagger).

Part 1:  Defending the Down Screen

The drill starts with player 1 passing to player 4. Defender X4 closes out on the ball with high hands and choppy steps and gives verbal “ball.” Defenders X2 and X1 both jump to the ball and get to the help line. Defender X3 assumes post defense 3/4 front on the high side.

Offensive player looks to set a down screen for player 2 (player 2 must wait for the screen so X2 can’t cheat the drill). X1 opens up and defender X2 shoots gap one player removed and assumes defense position. Drill continues with a slot to slot pass.

Defender X1 assumes 3/4 front on post. X4 jumps to the ball and opens up and defender X3 fights through screen one player removed. Drill can continue until coach says live and then players must get a stop to get out of the drill. An offensive rebound results in defensive team having a sprint after the drill.

Part 2:  Defending the Back Screen

Drill can also be used to help with how to defend back screens. Offensive player 1 sets a backs screen on defender X2. Defender X1 communicates back screen and player X2 rolls off ball side off of back screen and assumes correct defensive positioning. X1 zones up and helps on the back screen and then recovers. Screener pops to slot after setting back screen.

Drill continues as player 4 sets a back screen on defender X3. Defender X4 yells out backs screen and zones up to help and defender X3 rolls off ball side of back screen and assumes correct defensive positioning. Screener pops out to slot after screening. Again, the drill can continue until coach says live and players must get a stop to get out of the drill.

Drill can also be used to teach how to defend flare screens. Drill set up is the same except the players at the blocks widen out in order to set the flare screen. Drill begins again with a slot to slot pass. Defender X4 guards the ball and defender X3 either provides help or denies, depending on your defensive philosophy. Defenders X1 and X2 jumps to the ball and assume guarding position.

The next type of screen you can work on in this drill is defending the stagger screen. It’s the same drill set up, but now the ball needs to get swung from wing to wing.  There are several ways to guard a stagger screen, this is how we defend it. The first screener’s defender X2 zones up in the middle of the paint and protects against any curl, reject or slip. The second screener’s defender X3 shows hard on the 2nd screen with ball side hand in the passing lane. Defender X1 must lock and trail the offensive player coming off the staggered screen.

Drill repeats when ball is swung to the other wing and defensive movements are the same. Again, the drill can continue until the coach says live and the defense must get a stop to get out of the drill.

This drill is used to teach how we defend both flex and screen the screener actions. Drill begins with pass to either wing. The offensive player underneath the basket immediately screens away setting a back screen for the opposite wing. Defender X4 communicates back screen and zones up to take away lay-up while defender X3 rolls off back screen ball side and sprints to get back into position. X4 can even chuck the cutter for a split second, allowing defender time to recover. Once the backs screen has been set, the top offensive player immediately looks to set a screen for the screener right around the free throw line. Defender X1 must jump to the ball and allow defender X4 room to shoot the gap on the down screen.

On a pass back to the top, all defensive players position themselves accordingly. The drill continues with a reversal pass to the other wing. Again, the low defender X3 communicates back screen and zones up to take away lay-up and may even chuck the cutter. Defender X2 rolls ball side off of the back screen and sprints to take away pass on the low block.

Screen the screener action again takes place and defender X4 must jump to the ball allowing X3 opportunity to shoot the gap on the down screen. Drill continues until coach says live and the defense must get a stop to get out of the drill.