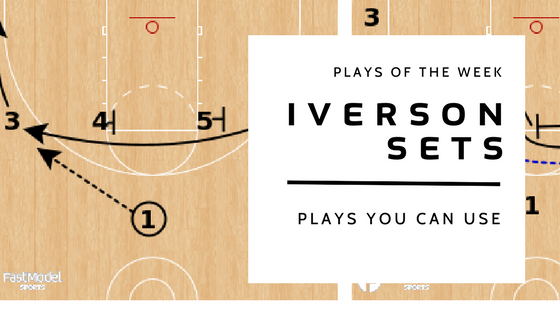 One of my favorite actions in basketball is the Iverson Cut. In our last few series, there have been plays, which include this action. I appreciate that the action is something that requires a team to specifically prepare to guard it. Even better, it is an action that allows for countless counters, so the defense will have a tough time scouting the series of sets. Below are some of my favorite sets, utilizing the Iverson Cut.

This set was also featured in our Plays YOU Can Use: Ballscreen Sets. It is a set with multiple options, and makes it very difficult for the defense to effectively switch. With the multiple options, you can also run it multiple times, to help your offense find a rhythm. Purdue ran a similar set in the 2017 NCAA Tournament. This is a nice counter to the Iverson Sets, as it uses the cut to pull the help away from the baseline. This set is even more effective if the you have a stretch-4.

This set is extremely difficult to guard, if a team does a nice job with the timing and angle of their screens. On the catch, there is a small to big shuffle screen. It is followed by a down screen. If the screening actions do not create a scoring opportunity, the post sets a step up, flip ball screen. The San Antonio Spurs ran a similar set in the 2017 NBA Playoffs. If you start the set with the Iverson Cut, it becomes even tougher to guard. The set features a baseline drive, and what looks like the Spurs typical “Hammer action.” In reality, there is a second Iverson cut, which happens behind the baseline drive. If you have a very skilled decision maker, then this set can become a read. If not, I would recommend looking for the throw back action.

The Iverson Loop set is a misdirection play, which can be used to get a player an open 3-point shot, or can be used as an isolation for a good driver. The Iverson cut clears out the weak side, which makes the action wide open. If the defense is switching, the 5 should look to slip to the rim for a lay-up.

When teams catch on to our “Iverson Loop” set, this is a wonderful counter. This has the same action, but utilizes a UCLA screen, to make it a screen-the-screener action. If the defense switches, then the 5 should screen their own man. This set could have easily made the “Late Game Situations: Need a 3.” The set ends with an Elevator Screen for the point guard. The Iverson Cut is becoming very popular, and I am sure that there are some coaches who have terrific sets, which are worth sharing. You can reach us on Twitter, or e-mail Coach Doug Brotherton at: CoachBrotherton@gmail.com