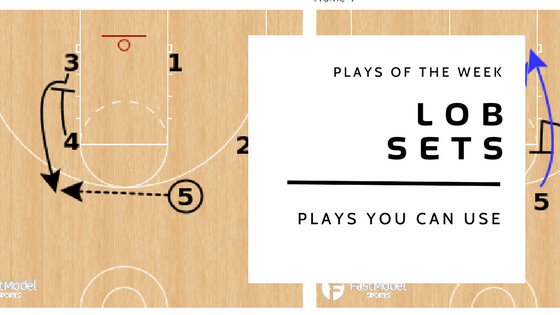 This week’s “Plays YOU Can Use” features lob sets. Lob sets are a tremendous way to spark your team, shift momentum, and get a pressure release from ultra-aggressive defensive teams. My pet peeve with lob sets are when they lack secondary options. If the lob option is not available, the action should always generate an advantageous situation for the offense. All of the sets featured in this series have multiple options if the initial “lob” is defended. I have also tried to provide a lob set for multiple spots in the game. These include a Secondary Break, SLOB, man-to-man, and zone lob sets.

For those that coach women’s basketball, or men’s teams that lack a great athlete, these lob sets can still be effective. Lob sets can result in layups, and are also a great way to counter defensive pressure.

This set was also featured in “Plays YOU Can Use: Ball Screen Sets.” The key to this set is the utilization of personnel. If a team puts their best shooter as the back screener, then this play is extremely difficult to guard. If the lob is not available, the back screener might have a 3-point shot, or can feed the post on a high/low pass.

This lob set features multiple screening actions, before the back screen for the lob. The passer has to read the help defense. If the lob is not there, then the back screener can out cut for a shot, or a high/low post entry pass. On the other side, the point guard gets a screen on the baseline. If X4 helps on the lob, then the point guard should be open for a shot in the corner. If you have been following along with our “Plays YOU Can Use” series, then you know that I am a big fan of the Iverson Cut. One term that you might have seen multiple times in our series is “FLOP.” We use this term, in place of “Fake.” The set utilizes a slip (or fake) of the down screen, to try to get a lob. If X5 sits in the lane, then the cutter should curl off the down screen. This will create a 2-on-1, at the rim.

This is one of my favorite Secondary Breaks. When coaching at Mid Michigan Community College, this was one of our two Secondary Breaks, which we ran specifically after free throws. The point guard “slices,” which is our term for changing sides of the floor. The ball side wing cuts to the opposite corner, which empties the weak side. As the ball swings through the trailer, the 5 cuts to the ball side short corner. This play is even more effective if your point guard can shoot the 3. If the lob is not available, the point guard will have an open 3, or a high/low post entry pass. A lot of high school coaches are being forced to play over 75% of their offensive possessions against a zone defense. “Banger” is a lob set, which is most effective against a 2-3 zone. We have also had success running this against a 3-2 zone, as well as a 1-3-1 zone, but it requires teaching your team the proper screening angles. If you convert the lob, consider running this set again, but with a simple counter. Have the 3 set the back screen, and then out cut to the wing. The 2 can simply screen in the top wing defender. As the defense collapses against the lob, which they just gave up, your 3 will have a wide open perimeter shot.

If you do not understand the counter, please reach out, and I am happy to share it with you. My contact information is listed at the bottom of this article.

This past weekend, I was able to attend the 2017 TABC (Texas Association of Basketball Coaches) Clinic, in San Antonio. It was a wonderful event, which had over 2,000 coaches in attendance. On Thursday night, TABC hosted a “Pass the Chalk” event. As you can imagine, I was very excited about sharing X’s and O’s with so many quality coaches. “The Hill” is a set that actually came from Coach Joey Sims, the boys varsity coach at Greenhill School, in Addison, Texas. After the event, I encouraged him to add the double stagger action. As I mentioned earlier, I want all lob sets to have secondary actions. This is a solid design, and I felt that it was worth sharing. Thank you to all of the coaches who shared at the TABC Clinic.

The best part of working with FastModel has been the opportunity to connect with other coaches. If you have a favorite lob set, please do not hesitate to share it. If you want more sets, or have any X’s and O’s questions, you can reach us on Twitter, or e-mail Coach Doug Brotherton at: CoachBrotherton@gmail.com