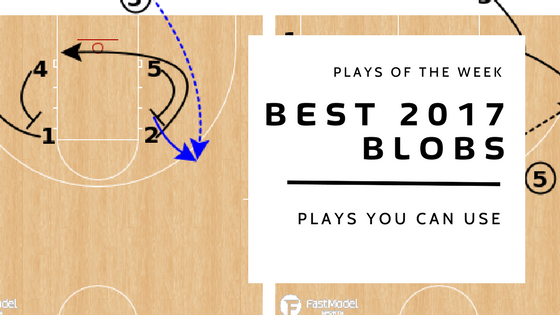 In this week’s “Plays YOU Can Use,” I will share my two favorite Baseline Out of Bounds plays from the 2017 NCAA Tournament, as well as the 2017 NBA Playoffs. In next week’s feature, we will give you a series of “BLOB” plays, which you can incorporate into your own system.

This misdirection BLOB resulted in a wide open three pointer. What caught my attention was the multiple aspects of misdirection, leading to the throwback pass. The 2 receives a screen, and curls it to the weak side. When the 5 catches, he dribbles towards a flare screen on the weak side. The defense is now all moving that direction. The inbounder steps in, and sets a baseline screen for the 2. This set is also great for the high school level, as it can be run against a zone, with the screen being set on the outside defender in the zone. In Middle Tennessee State’s first round win, this BLOB caught my attention. It is a terrific “Circle Action,” utilizing a dribble hand off, cross screen, and screen-the-screener down screen. Not only did MTSU score, but they had multiple options come open. My favorite part of this BLOB is that it starts in a stack formation. At this time of year, NBA teams do a terrific job of scouting. By starting in a stack formation, the Cavs’ opponents can not pre-switch any actions. This BLOB has been successful in two big moments for the Cavs. The first time being in the 2016 NBA Playoffs, resulting in a three pointer for Kyrie Irving, to beat the Pistons. In the 2017 NBA Playoffs, the Cavs got a lay-up, to seal a first round win. This BLOB is my favorite of the 2017 NBA Playoffs. The Clippers ran a double stagger screen, to get a catch. After passing to the 5, they get into a “Pistol Action.” It fit their personnel to perfection, and scored twice in the same first round game. As a reminder, we sent out some terrific Pistol Action in Plays YOU Can Use: Pistol Action & Counters. The plays above are my favorite two from the NCAA Tournament and NBA Playoffs. We would love to see some of your favorites. If you want more sets, or have any X’s and O’s questions, you can reach us on Twitter, or e-mail Coach Doug Brotherton at: CoachBrotherton@gmail.com