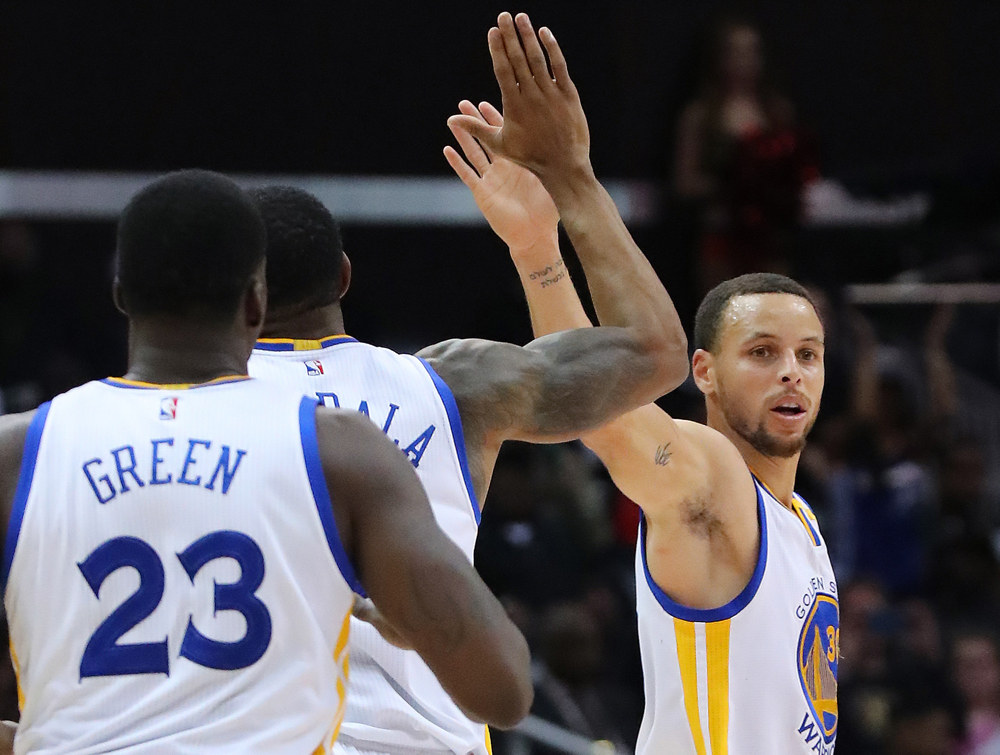 The Golden State Warriors entered the 2017 Playoffs riding a historic 3 year run as the most explosive team on earth and have rolled over the rest of the Western Conference to the NBA Finals. In this Starting 5, we examine five sets and actions that have been a staple of the Warriors’ success.

One of the most brilliant after timeout plays Steve Kerr has run in his time with the Warriors is this back screen set they run for Draymond Green. By using Stephen Curry as a screener twice, the Warriors are able to punish teams that pay too much attention to Curry and not enough to their other scorers.

A floppy action is common in the NBA and at many other levels. It’s a great action for shooters who are given time to read screens and be a threat off simple down screens. Since the Warriors have so many shooters, their use of the Floppy action is particularly dangerous when Curry, Klay Thompson and Kevin Durant are all swirling around each other — and more dangerous in those instances where Curry or Thompson are screeners.

Because Steve Kerr has the luxury of utilizing some of the best shooters in the world, he runs great actions like this one designed specifically for them. In UCLA Rip, he places two shooters on the same side and runs them in a three-man pattern with Draymond Green at the 4. The screening and attention paid to their shooters helps the backdoor pass from Green be effective — which is why the two players not involved in the action must be lifted on the opposite side of the floor.

A great action from Golden State into a ball screen that always ends up in fantastic spacing for a spread ball screen — a middle pick-and-roll with shooters surrounding. Dribble handoffs can create switches in their favor or an earlier opportunity to attack.

Golden State is a great defensive team, so they get to attack on offense multiple times per game before a defense gets set. When Curry has true post players surrounding him, the Warriors will often run into Double Drag, a double-high ball screen action that strikes before a defense can properly get into position. Because of the spacing of shooters in the corners and the attention Curry receives in ball screens, the rim is often left unguarded. March 6, 2017 – Atlanta, GA, USA – Golden State Warriors’ Stephen Curry gets five from Andre Iguodala after hitting a three-pointer against the Atlanta Hawks during the second half on Monday, March 6, 2017 in Atlanta, Ga. The Warriors beat the Hawks, 119-111. (Credit Image: � Curtis Compton/TNS via ZUMA Wire)
Sharing
Authors