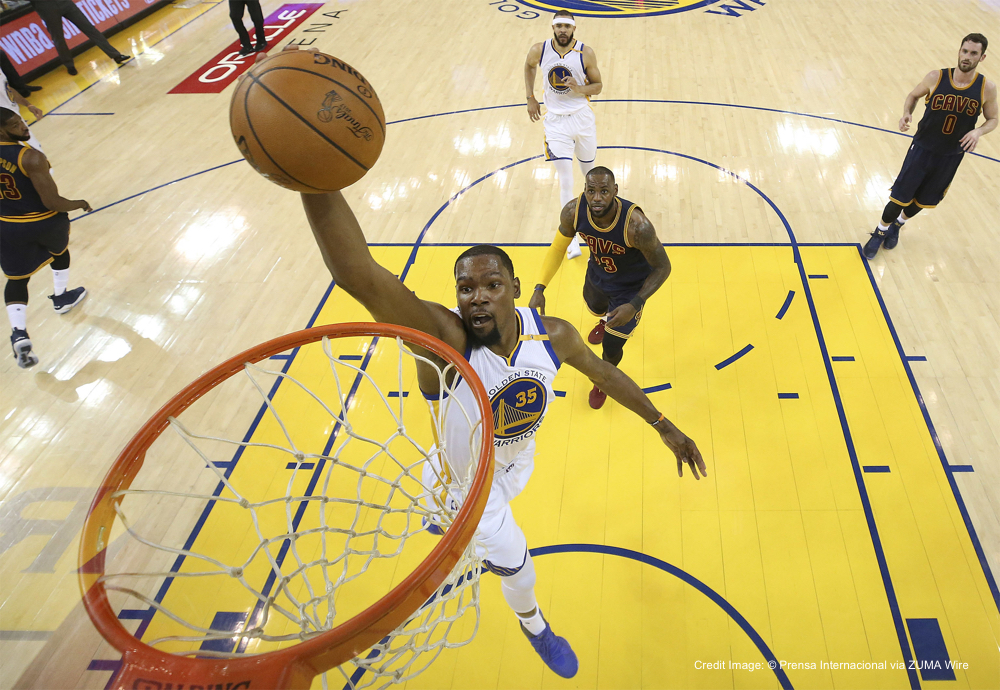 The Golden State Warriors and Cleveland Cavaliers have been on a collision course for the NBA Finals from day one of the 2016-2017 season. The Warriors look like the most unstoppable team in the NBA history, but it is history that has taught that the series doesn’t really start until the road team wins a game.

This week’s Plays of the Week features #XsOs from Game 2 of the 2017 NBA Finals.

The Golden State Warriors ran this play to start the 4th quarter in Game 2 of the NBA Finals. It is a variation of the “Loop” play that they run, which Steve Kerr brought over from his time with the San Antonio Spurs. Normally 3 would curl around 5 to receive the pass up top from 1. In this play 3 curls around 5 to the FT line and 1 passes to 5 in the post. 3 & 1 then set a staggered screen for 2. 2 curls around 3’s screen and cuts to the basket to receive the pass from 5.

The Golden State Warriors ran this play in the 1st quarter, shortly after Javale McGee (5) checked into the game. This play utilizes the athleticism of 5, getting him open because the defense can’t provide help on the ball screen off of Steph Curry (1) or Klay Thompson (2). As Kevin Durant (4) turns the corner on the ball screen, McGee gets a running start to the rim. Kevin Love tries to provide help off of 3 but he couldn’t get high enough to contest the lob.

The Golden State Warriors run this variation of the “Motion Weak” set to get Steph Curry into a pick & roll situation. 1 passes to the wing and cuts through the lane as the ball is reversed to 4 and back to 1. 3 sets a cross screen for 5 who sprints into the ball screen. 1 uses the ball screen to create or get an open shot for himself.

The Cleveland Cavaliers ran this play to get a quick post up for LeBron James (4). The Warriors had to provide help on 4. 3 then screened for 2, getting him open for a three point shot. The Cleveland Cavaliers ran this play in the 3rd quarter of Game 2 of the NBA Finals. Though they weren’t successful in the execution, this play provides a few opportunities for open shots. After 4 receives the ball in the post, 2 sets a hammer screen for 3 cutting to the corner for the first option. If 4 sees this option open he can drive baseline to make the pass to 3. The secondary option is 5 setting the split screen for 1. In this play, the warriors switched the screen and 5 cut to the basket for a layup.