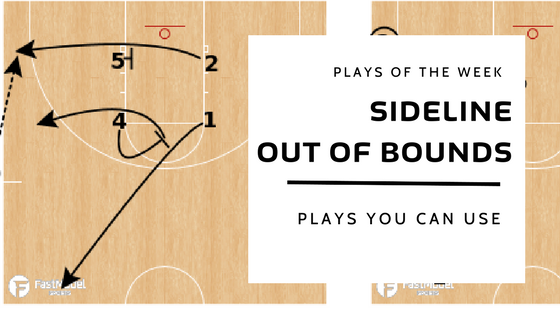 This week’s “Plays YOU Can Use: SLOB Sets” will feature five plays, which offer multiple options. Before you begin picking your SLOB sets, here are a few things to consider:

While these are just a few thoughts, there are also different philosophies that dictate how coaches select their SLOB sets. Some coaches get into a formation, which allows them to inbound the ball, and run their half court sets. Other coaches, like Mike D’Antoni of the Houston Rockets, run a “read-based” SLOB play. The most traditional philosophy is to have multiple SLOB sets, with multiple options. The only wrong answer is if you do not have a philosophy at all. Below are some different SLOB sets, which we hope will help you establish your philosophy, and might even find their way into your playbook. All of the sets begin in a box set, so you can also use these sets as a SLOB series.

This is a simple set, which enables a team to get a post isolation. If the defense switches, the inbounder should look to throw it directly to the post player. If the defense fronts the post, the back side is vacated, allowing an easy lob pass.

The strength of this SLOB set is the multiple scoring options. There is an early option for a lay-up, on a shuffle cut. This is followed by back-to-back double stagger screens for shooters. A lot of NBA teams use the “Zipper Cut” to get the ball inbounded. It is a simple pin down, which allows the guard to sprint to the ball. This is a misdirection counter. The post slips the pin down, to receive the inbounds pass. A flare screen allows for a skip pass, which leads into a screen-the-screener action. This set allows a team to use their best shooter to cross screen for the post, before sprinting through an elevator screen. This SLOB set was used by Princeton in the 2017 NCAA Tournament. Down by 3, with under 20 seconds left, this set resulted in a wide open three point shot. I have added an elevator screen to the end of this set, in the case that the first shooter does not have a shot. Here is a video of the play: This set is an example of teaching multiple options, out of one SLOB set. The Houston Rockets do this better than any team in the NBA, and it allows them to adjust to whatever adjustments are made by the defense. I have designed the weak side action in this set to remain the same, regardless of the ball side action. This is to simplify the read for the player with the ball. After the shuffle cut, there are three options, which are triggered by the 4-man. The first option is to pass to the wing, and chase into a ballscreen. The second option is a dribble hand off with the wing. The final option is to pass to the wing, and cut to the block. If you do not like this particular design for your team, consider creating your own read-based SLOB set, which plays to the strengths of your team. If you enjoyed last week’s “Plays YOU Can Use: BLOB Sets,” we have an opportunity for you to get a free playbook. The playbook features an “Odd, Even, Zero Playbook,” with sets that are specifically designed to beat man-to-man or zone defense. These are the BLOB plays that Coach Brotherton used with his team this past season, which led to a 6.3 point per game advantage in baseline-out-of-bounds situations. Simply click the link below, fill out the form, and the playbook will download to your computer.

Once again, you can e-mail Coach Doug Brotherton at: CoachBrotherton@gmail.com

Plays YOU Can Use: BLOBs
The following two tabs change content below.