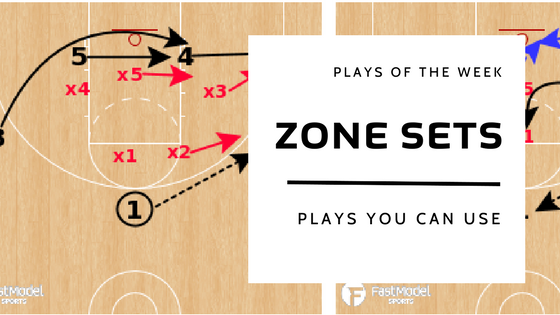 This past season, our team faced a zone defense over 70% of the time. This is a number that has been steadily increasing over the past few years. If you are concerned about guarding a team who runs terrific half court offense, a zone defense allows you to prepare for less actions. With more coaches making the decision to play zone defense, it is becoming very important for coaches to prepare their team with zone sets. This week’s “Plays YOU Can Use” features some terrific zone sets, which we hope will find their way into your playbook.

This is my favorite set to run, when we want to get an interior catch against a zone. As a student manager at Central Michigan University, Ernie Ziegler ran this set. It was so successful at the Division 1 level, that I have continued to use it. It is especially good, if you have a good shooter to run the baseline. The defense is forced into a “pick your poison” situation, which means that the offense should be guaranteed a quality shot. This zone set can be run to start a possession, as it begins with a simple pass to the wing. If we are struggling to get the ball moving side-to-side, which is a crucial part of attacking a zone, then we will run “Buster.” We hope that it results in an open shot, or post entry pass. Even if it doesn’t, we force the zone to scramble, and should be able to flow right into our zone offense. The most underrated resource for coaches is their opponents. Too often, coaches ignore the things that other coaches do well. There is a simple saying, which coaches would be well-served to remember, “if it works AGAINST us, it will work FOR us.” We recently attended East Texas Baptist University Team Camp. An opposing team ran this set play against us, to get a lay-up. I have added a second option, as we want all of our sets to have a couple of looks. The use of misdirection makes this set very effective. This is my favorite set, to get a three-point shot against a zone. It is especially effective, when it is ran in transition. The dribble weave lulls the defense to sleep, as the misdirection is set up. A double screen sets up an open three point shot, or lifts the wings in the zone, which makes for an easy post entry pass. This lob set uses numerous cuts to set up a back screen for a lob. There is also a screen-the-screener option, if the defense adjusts to the back screen. My favorite part of this set, is that the ball gets back to the point guard, as this is the player that most teams prefer to be the primary decision maker. This set can work against multiple zone defense, by simply teaching the screener to adjust the angle of the back screen. These are just a handful of the zone sets that our team has run over the years. If you are looking for more ideas, or have a zone set that you would like to share, please e-mail Coach Doug Brotherton at: CoachBrotherton@gmail.com

Plays YOU Can Use: BLOBs

Plays YOU Can Use: SLOBs