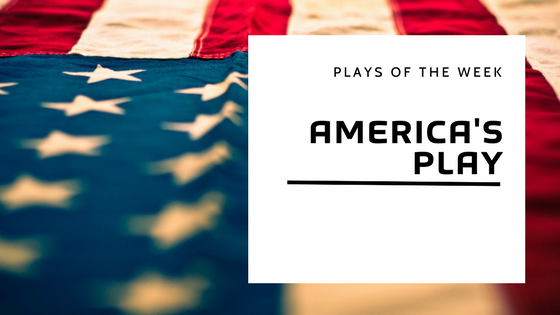 If you have been to a basketball clinic recently or have talked hoops long enough, you have surely heard the term “America’s Play.” I first heard the term as a high school basketball player 20+ years ago, but didn’t think anything of it until I started making the rounds as a coaching clinic attendee. “America’s Play” has been the term used for the play or set that is in every coach’s playbook in the entire country.

We asked coaches on twitter what they considered to be “America’s Play” and the results were fascinating. What we found was that there was not a singular “America’s Play,” but numerous plays that most every coach has or needs in their playbook.

Hey Coaches! Question for you: What do you consider “America’s Play?”

This week, as the United States celebrates it’s Independence Day, we will celebrate the #XsOs that have reached the height of popularity and have earned the title: “America’s Play”

BLOB. Enter to corner, pass to wing, screen for inbounder to pop to near side corner for 3 with option for double to W/S corner/wing

A common response when asking for “America’s Play” was screen the screener action, specifically cross screen down screen. Flex has been and always will be a great continuity offense for beginner levels of basketball. It is also great action for any man-to-man quick hitter or set. You will often see the flex action disguised by false motion at the NBA and highest level of international basketball as well.

How A Clever Kansas Play Went Viral And Took Over College Basketball https://t.co/IkpQSboexn

When Fran Fraschilla calls a play “America’s Play,” who are we to argue? This set from Kansas and Bill Self won a national championship and has been a staple of late game #XsOs at most levels of basketball.

Did we miss something? What do you consider “America’s Play”? Let us know in the comments or join the conversation on twitter. Follow us at @FastModel.