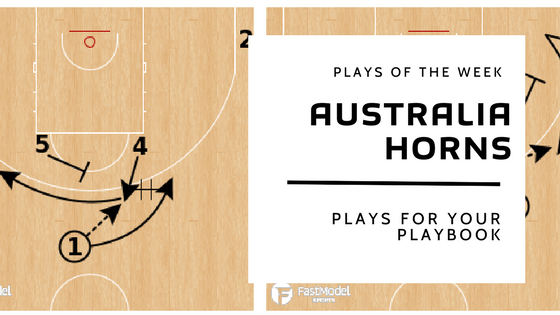 The game of basketball is evolving. Every player at all levels is expected to be able to play on the perimeter. As the game has evolved, the horns formation has become a staple in playbooks across the world. By bringing the 4 and 5 near the top of the key, the defense has a number of new and difficult tasks to defend skilled players.

This week our Plays of the Week features four Horns sets from the Australia Women’s National Team. If 1 isn’t open for a shot off of the down-screen from 5, 5 automatically turns and re-screens for 1 for a middle pick-and-roll action. As 5 rolls to the basket, 4 replaces high. 1 has option of passing to 5 rolling or snapback to 4 filling high. After 1 enters the ball to 4 at the elbow she follows her pass for a handoff. 4 fakes the handoff to 1 and keeps it herself. 5 sets a brush screen on x4 creating a lane for 4 to attack to the basket.