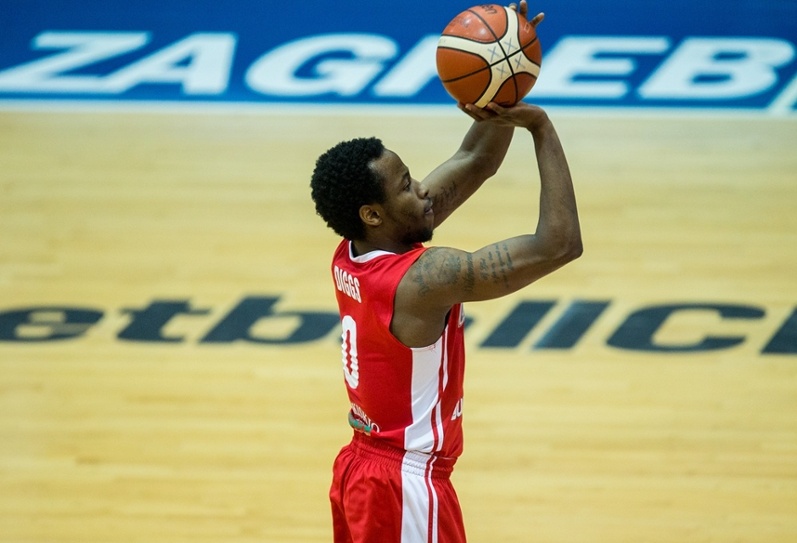 The ability to shoot on the move and also make quick ball-handling moves on the catch is a skill that many players lack in today’s game. Majority of players play the game downhill or north to south. This isn’t necessarily the wrong way to play, but it limits your ability to be a proficient scorer and distributor on the court.

In game-like situations, your body will be continually moving north to south and east to west. Likewise, defenders will be closing out or chasing you from every possible angle. If you’re simply a north to south player when you have the ball, this will make you much easier to guard and if you aren’t able to utilize ball-handling moves moving side to side then you may find yourself struggling against good defensive teams.

BETWEEN-CROSS SHOOTING ON THE MOVE

The first shooting drill we worked on was running into the pass at 5 different spots on the 3 point line. Each time the offensive player will need to turn into the catch and then make a quick between the legs, crossover move side to side. We are simulating the defender trailing the play or closing out at a diagonal angle. Make sure to sell the move by planting your foot to change directions which will really sell the move. Once you hit your goal the Dish will automatically transition to the next drill. There is no need to reprogram or anything and this is one of the things that separates the Dish from anything else out there.

After completing the first shooting drill you will transition into a 60 second ball-handling drill. The goal here is to get in as many reps as you can before the time runs out and you transition to the next shooting drill. The focus for this drill will be using two basketballs at the same time. One basketball will be crossing in front while the other will be crossing behind the back. Try your best to eliminate set up dribbles or dribbles on the side and continue to crossover in front and behind with two balls. You have to have quick hands and snap the basketballs back and forth to maintain a good rhythm. When the 60 seconds finishes, you will hustle to your spot and start the next shooting drill.

BETWEEN THE LEGS AND BACK SHOOTING ON THE MOVE

In our third drill we will once again focus on catching the pass on the move then utilizing a quick double move into the shot. Timing and pace are our main focuses with this shooting drill. Make sure you are sprinting into the shot each time and then making the quick between the legs and back move into the shot. Make sure to plant the back foot so you can burst into the shot and this change of pace will help you create space for the shot. You’ll have a chance to go around the horn and back so make sure to practice going both ways and using both hands. After hitting your shooting goal, the Dish will transition into the same ball-handling drill we did before. Try to beat the amount of reps you got in the first time and push yourself the entire 60 seconds.

BETWEEN THE LEGS POP BACK SHOT ON THE MOVE

In this last shooting drill we’ll move spot to spot catching on the move and on the catch we will plant the front foot and do a quick between the legs into a pop back shot. Make sure to use both hands going both ways depending on which way you are sprinting into the shot. This is a great move that many NBA players love to use and can be very effective if you master the footwork and also can make the shot consistently. After reaching the shooting goal, you will transition into the last shooting drill which will be free throws. It’s extremely important to make free throws when you are tired and to challenge yourself when creating a free throw drill to hit a streak before finishing up.