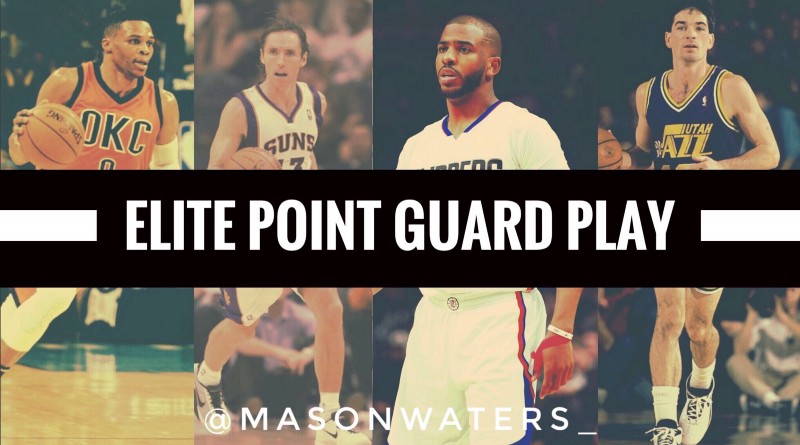 What Makes The Best, The Best

Reacting to the Defense

Passes are On Time and On the Money

I don’t know the precise statistics on this, but I would project that more accurate passes lead to a higher FG% for shooters. Not only that, accurate passes lead to a more efficient scoring situation for the receiver of the pass. When the receiver gets the pass where they want it, when they want it, they are able to remain on balance, in an athletic position. Whenever the pass is inaccurate, the ball both slows down the receiver and may put them off-balance. This is a huge difference maker for elite point guards.

The smartest offense is one that finds and leverages mismatches. Smart point guards identify which of their teammates has an advantage, and then puts that player in a situation to score. This is one of the keys to selfless basketball  —  getting the player the ball who has the greatest chance to score.

Killing a dribble too soon gives the defense an advantage —  great point guards pick up their dribble only when they’ve made a decision to pass or shoot. Never will they kill their dribble without having a purpose to pick it up.

Pass the Ball Ahead into Advantaged Situations

Lonzo Ball is phenomenal at this. As a coach myself, I’ve seen countless situations where the point guard did not pass the ball up the floor in transition into an advantage situation. Why would a point guard not pass the ball ahead into a 2-on-1, 3-on-2, or some better situation? There are surely several reasons but the two most common ones are the point guard is simply selfish, or just doesn’t understand basketball. Moreover, passing the ball ahead to sprinting teammates is a reward for those teammates running the floor. When sprinters don’t get the ball, they stop running! Point guards who share the ball and reward teammates with a lass for sprinting the floor are fun to play with!

I played with a not-so-talented point guard in high school. For whatever reason, he not only would shoot much more than he passed, but he also passed to only his “friends” on the court — not the best offensive player. Many games I remember he would enter every offensive set by passing to a decently talented 10th grader as opposed to one of our playmaking seniors. Elite point guards get the best scorers the ball the most and don’t care who is involved in the play as long as plays are being made.

The eyes are the most deceptive body part in basketball. Playmakers have the ability to make no look passes, find an open teammate in their peripheral vision, or pass and eye fake one way, only to pass the other way. Just like how a quarterback “looks off” a safety in football, elite point guards look off defenders on the hardwood.

I don’t know if this is 100% true because I’m only 22 years old, but I would venture to say that two, three, and four decades ago, players weren’t so “inward”. By inward I mean that players today are too often only focused on “getting theirs”, without competing, encouraging, challenging, or confronting teammates in practice. Elite Point Guards are empathetic with their teammates and have the skill to identify which teammates are dragging and need some competition, those who might have off-court issues and need some encouragement, or teammates who may need confidence back in their jump shot after a scoring slump. Elite Point Guards constantly ask, “How can I get all my teammates playing to their best ability with utmost confidence?”

Ability to Pass With Either Hand

One thought I add to this. Great point guards can pass with either hand both out of a triple threat, and off of a dribble. In my FILM SESSION featuring Steve Nash, you’ll notice how fast and accurately he passes the ball with one hand, off the dribble.

There are dozens of options for pick and roll play. This is not the article to explain all of those options and reads, so if you’d like more info email me at mason1waters@gmail.com. But elite point guards know how to score and make plays out of the pick and roll.

Set Up Players to Their Strengths

Know Who They’re Passing To

They don’t give an outlet pass to a terrible ball handler. They don’t pass the ball to a big who can’t dribble against pressure on the perimeter. When on a 3 on 2 fast break, a point guard knows who he/she is running with. The point guard will get the ball to the better scorer! If there is a terrible offensive player on the team, Point Guards will not pass that player the ball unless they are wide open.

Finish With Either Hand, Off Either Foot, At Any Angle

Combine any of the following; left/right foot, left/right hand, in front of/behind hoop, straight-on/coming from baseline, quick/high finish. Elite point guards can finish with any of those combinations!

If you’re a point guard, you should print this article or copy it into your notes and re-visit it every now and again. It’s important to feed your mind this kind of basketball knowledge!

Thank you for reading!