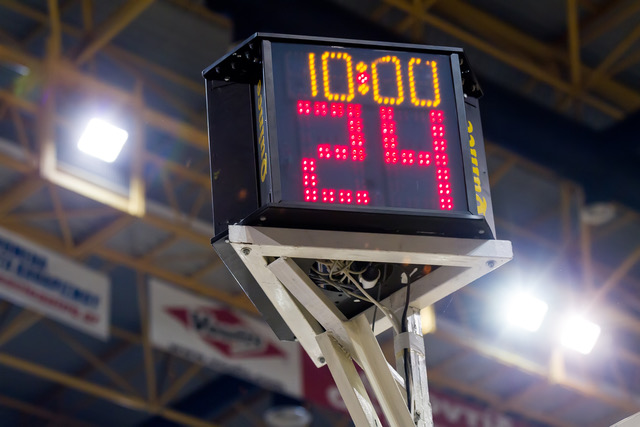 This summer, my home state of Wisconsin became the latest to implement a shot clock for high school basketball. The change, which won’t take effect until the 2019-20 school year, was met with overwhelming support, despite the growing pains that likely will accompany it.

Debate over the high school shot clock has been going strong for more than five years now. Earlier this year, Maryland approved a 35-second shot clock for boys basketball — the clock is already used by the girls — and Wisconsin followed just months later with its own 35-second clock. Other states, including Texas, have examined the issue without making changes, but the shot clock is gaining momentum. The overarching question is what took so long?

Winning Hoops conducted two polls over the past three years asking coaches their feelings about the shot clock, and each time at least 70 percent said they supported it. The Wisconsin Basketball Coaches Association conducted its own survey, showing 81 percent favored the change. Most believe it will improve the flow of the game or better prepare athletes who plan on playing at the college level.

“My league has been using it for about 16 seasons and actually reduced it from 35 seconds to 30 seconds this season,” said one coach in Winning Hoops’ poll. “Total no-brainer. I can’t imagine playing without it. Whenever I see a game on television without it and watch a team down by seven with three minutes left forced to foul because the team in the lead has decided to take the air out of the ball, I just shake my head. That is not how the game is supposed to be played.”

“The game is supposed to be for the kids,” said another coach. “No kid wants to play in … (a) stall game. A 30-second shot clock would allow teams to play fast or controlled, but would force teams to play.”

Those who stand against the shot clock have valid concerns. There is the cost, which is estimated to be at least $2,000 to install clocks in gymnasiums (Wisconsin is actively searching for a corporate sponsor to decrease expenses). Schools must also find and train clock operators.

Then there’s the divide between the strongest and weakest teams. Coaches who don’t have the talent or speed to keep up with their toughest opponents view stalling tactics as their greatest weapon.

States have options when it comes to helping coaches and teams adjust, but the truth is an overwhelming majority of coaches in states that already use a shot clock have nothing but praise for it. We often forget that the purpose of high school sports isn’t to win or break records — it’s to play. Your athletes don’t lift weights and put up thousands of shots during the summer so they can play keep-away from their opponents. They want to compete, so let them.

It’s possible, even likely, that more states will adopt the shot clock over the next few years. Not everyone will like it, but the best coaches will embrace it as an opportunity and find a way to make it work for their program and their athletes.

Comment below or on FastModel Sports social channels whether you think adding a shot clock at the high school level will have a positive, negative or indifferent effect to the game.

Kevin Hoffman is the editorial director for Winning Hoops magazine. He can be reached at WHedit@winninghoops.com. Winning Hoops is devoted to helping coaches and athletic administrators at all levels of play develop successful basketball programs. It’s goal is to educate athletic program leaders, providing them with the tools and knowledge necessary to build powerful basketball programs and develop successful student-athletes.