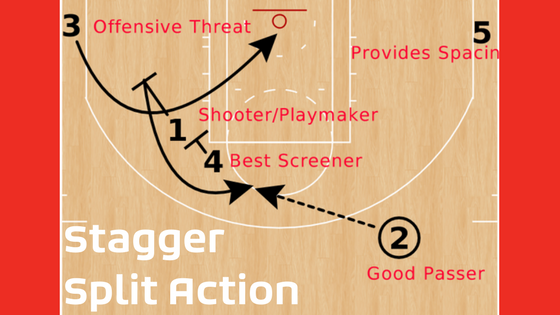 A great way to expand an offensive playbook is by focusing on the actions that make up specific plays. By breaking plays down to their individual components, players will become more proficient in executing the actions. This also gives the option of utilizing those actions in a variety of ways without players having to learn a completely new play. When players understand the basic action, executing it in a new situation will comes easier to them.

Click on the play name or diagram for a link to download it and view play video.

In the stagger split action the player positions don’t matter as much as putting players with the right skill set in those positions. The play goes as follows: 1 and 4 set the stagger screen for 3; 3 curls around the screen from 1 and cuts to the basket; 1 then cuts off the down screen from 4 to receive the pass from 2. This is an example of the stagger split action being used as the entire play.  The Boston Celtics were in a 5 out formation and went to this action in an end of game situation in the 2017 Eastern Conference Finals. The Golden State Warriors start this play with a pass to the 5 in the pinch post area. 1 follows the pass looking for a handoff. If that isn’t available 5 makes the read off of the stagger split action. This is especially effective for the Warriors when they put a great passer like Draymond Green at the 5 position.

This play is very similar to the previous one in that it sets up the passer to have the ball in the same area. The Utah Jazz started with a pick and pop to get the ball to 4 up top. He then looks to make a pass to the 2 (Gordon Hayward) where he can make a play.

The Indiana Pacers summer league squad ran this play out of the elbow set designed to get 1 the ball off of a down screen. They started with an entry to 4 popping out from the elbow. 1 then cut to set the stagger split screen with 5.

The Golden State Warriors often utilize the stagger split action after making a post entry. It’s a great play to get the defense to guard multiple actions and get the ball back in your point guard’s hands for a shot. The double drag at the beginning of the play was a decoy action to get the ball into the post. After the post entry 1 & 5 set a staggered split screen for 2, who cut to the basket off of 1. 1 was getting overplayed on the screen from 5 and rejected the screen to go backdoor for a layup.

The Boston Celtics are among multiple teams that use the stagger split action as a baseline out of bounds play. The play starts with a staggered screen with 1 & 5 screening for 2 at the free throw line. 2 curls around the first screen from 1 and cuts to the rim. 1 then turns around and cuts off of the screen from 5. 3 looks to pass to 2 at the rim, then 1 off of the screen. If those options aren’t available, 5 pops up top for a safety option. 4 stays in the corner for spacing. View videos and download all diagrams from this article at the FastModel Sports PlayBank.