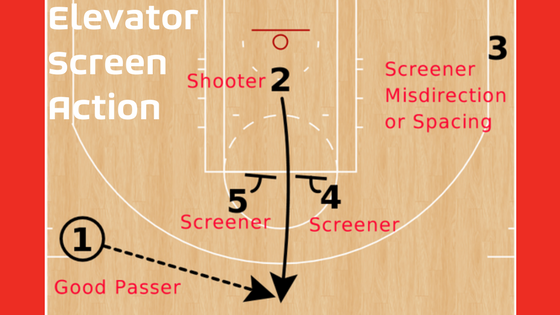 A great way to expand an offensive playbook is by focusing on the actions that make up specific plays. By breaking plays down to their individual components, players become more proficient in executing the actions. This also gives the option of utilizing those actions in a variety of ways without players having to learn a completely new play. When players understand the basic action, executing it in a new situation comes easier to them. See our previous breakdown of the Stagger Split Action here.

Just like in other actions, the positions don’t matter as much as putting players with the right skill set in those positions. Most of the time the 1, 2, and 3 positions become interchangeable with the 4 & 5 usually setting the elevator screen. The elevator action happens when a player cuts between two screeners. Once they get through, the screeners close together to form a wall where the defender can’t get through, which frees them for a shot. Using the Elevator Screen as the Entire Play

The Washington Wizards ran the elevator action as the entire play to get Bradley Beal (2) open for a 3 point shot. 2 cut to the rim as 1 dribbled to the wing. 2 then cut through the elevator screen to receive the pass from 1 for a shot. In this play 3 stayed in the corner to provide spacing as the elevator action took place. Involving the Shooter in Additional Screens The New Orleans Pelicans used a cut from their point guard to create misdirection to set up their elevator screen. 1 dribbled to the wing and passed to 3 who was cutting up top off a zipper screen. 1 then cut to the right side of the court using a screen from 5. 2 brought the action back to the left side of the floor by cutting through the elevator screen from 4 & 5.

Using the Elevator Screen as an Initial Action

The Spanish National Team runs multiple ball screens in their offense, and in this play used the elevator screen to help set them up. They started with 2 curling around 4 and screening for 3 at the rim. 3 then cuts through the elevator screen to receive the pass from 1. 1 then cuts to the corner, putting them in a horns set. 1 can use the ball screen from either 4 or 5 and they can flow into the different options they have from using each screener.