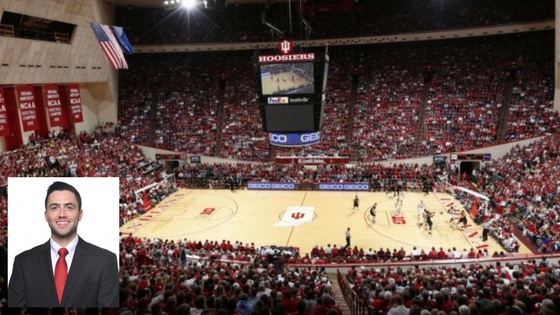 In the 5th part of our series, we connect with Ben Sander, Team & Recruitment Analyst for Indiana Men’s Basketball.

FastModel Sports: Tell us about your coaching background.

Ben Sander: It all started for me when I was a student manager at the University of Arizona from 2011-2015. I was a part of some great teams and had the opportunity to observe one of the best coaches in the business, Sean Miller, operate on a daily basis. After graduating from Arizona, I became a Graduate Assistant at the University of Dayton for Archie Miller. During my two years at Dayton, our teams won back-to-back Atlantic 10 Championships and advanced to the NCAA tournament both seasons. When Coach Miller decided to take the Indiana University head coaching position this offseason, I was very fortunate to make the transition to Bloomington and join his new staff at IU.

FMS: Explain what your current role as Team and Recruitment Analyst is all about.

BS: My current role as Team and Recruitment Analyst has a heavy emphasis on film. I serve as our Video Coordinator and produce game, practice, scouting, and style of play edits. To me, my role is to help our staff and players prepare for improvement and upcoming opponents. On top of my video duties, I help with on-campus recruiting, help organize the coaches’ recruiting schedules, and I run the Archie Miller Team Camp over the summer.

FMS: Why did you want to take on this role?

BS: First reason would be Coach Archie Miller – I 100% believe in what Coach Miller is about and how he cares for his players and staff, on and off the court. Secondly, the opportunity to be a part of Indiana University and one of the most prestigious college basketball programs in the country was an opportunity that I could not pass up.

FMS: What do you like best about your job?

BS: My favorite part of being in this business has always been being around the guys. I love developing relationships with the players and learning from the coaches and support staff. During all my stops at Arizona, Dayton, and Indiana, the players and staff have been unbelievable and it’s been outstanding to see the daily approach translate to success on the court.

FMS: What role does technology play in your daily workflow?

BS: Technology is absolutely essential in my daily workflow and without it, I would not come close to executing my role. Along with video software, we use FastModel Sports products, such as FastDraw and FastRecruit, on a daily basis to help prepare our coaches for opponents and recruiting. The FastRecruit app is an absolute life saver during the July recruiting period when you are trying to keep your head coach and three assistants organized on the road.

FMS: How has your mindset changed from when you first started coaching?

BS: I think as you progress in this business you learn a lot from observing. Every day you have the opportunity to observe people who have reached levels of the business that you want to reach. You learn what to do, what not to do, and ultimately how to treat people. My mindset from the beginning has been to prepare myself to one day become a head coach. I think if you’re a young coach in this business and your mindset is not to become a head coach, then you are immediately putting yourself at a disadvantage.

FMS: What’s the best advice you’ve received about pursuing a career in coaching?

BS: I think the best advice that I have received about pursuing a career in coaching is having patience and surrounding yourself with great people. There are only so many Brad Stevens, Shaka Smarts, and Archie Millers in the world who have had the opportunity to lead successful programs at a young age. Advancing in the coaching world can take time, so it’s important to stay patient and surround yourself with people that have your best interest in mind. Don’t take a job just because it looks good on paper, make sure it is the right fit and with the right people who can help you reach the heights that you want to reach.

FMS: What advice do you have for those wanting to coach?

BS: Make sure you really want to coach because college coaching is not a 9-5 job, or a job that is only pertinent during the season. It is a 24/7, year-round commitment that takes a lot of time and energy. It’s important for anyone who wants to get in the business to realize the grind that is college basketball.

FMS: Describe the importance of networking in the basketball industry.

BS: Regardless if we are talking about the basketball industry or any other career choice, networking is an essential life skill that everyone should work on. In life, it is challenging to evolve and advance if you do not build strong relationships with the people around you and networking is a way to develop those relationships. One thing that bugs me is people that network just to say that they are networking. Make sure your networking is authentic and concentrate on building meaningful relationships that will help you down the line.

BS: The simple answer to this question is that I want to become a head coach of a college basketball program. I want to represent an athletic department and university the right way by leading young men on and off the court.

FMS: What is the best memory of your coaching career so far?

BS: It is hard to pinpoint one specific memory, but being a part of four straight conference championship and NCAA tournament teams was a lot of fun.