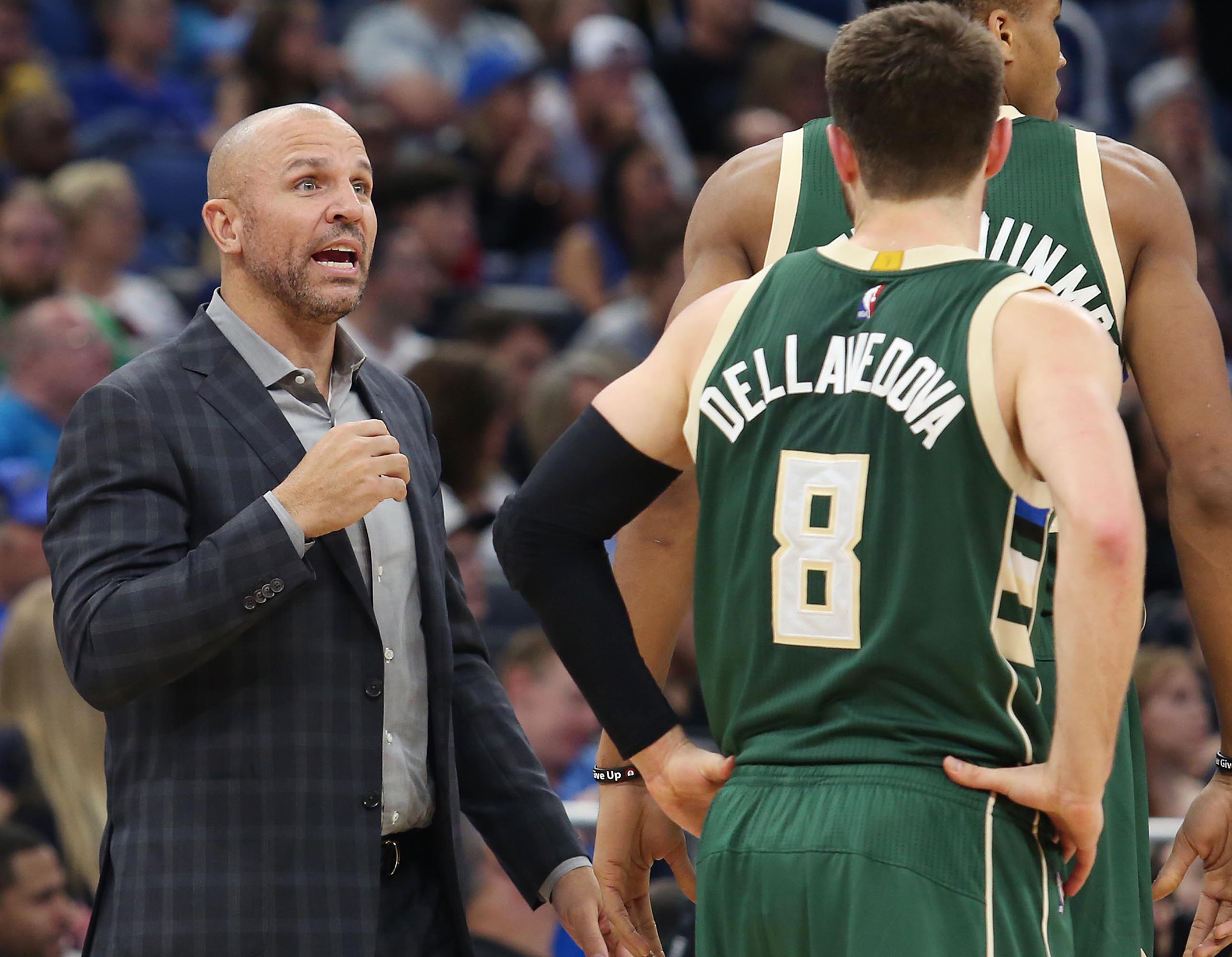 Video and diagram breakdown of the Milwaukee Bucks Corner Offense and its entries and options.

Many believe the Milwaukee Bucks (15-11, 4th in Eastern Conference) are the NBA’s team of the future. With an abundance of youthful length and powered by an other-worldly star in Giannis Antetokounmpo, the Bucks are having success now with an offense from the past – The Corner Offense.

Longtime NBA coach Rick Adelman popularized the offense and Jason Kidd’s Bucks are adapting it to fit their versatile personnel. Below we will examine some entries and options the Bucks use in their version of the Corner Offense.

In the screenshot below, the Bucks are demonstrating the basic alignment of the Corner Offense. The “corner side” has a big posting at the elbow with a guard advancing the ball and the ball side corner filled. On the weak side, the Bucks are in a pinch post alignment – big on elbow, guard in slot. From there, the Bucks use various entries.

What follows are the prevalent sequences the Bucks employ upon each entry.

Often the Bucks simply flip, or dribble handoff, to the ball side wing in the corner. As you can see in the video below this is often enough to create an advantage for a shot – especially with Antetokounmpo delivering the handoff.

Video – Simple Dribble Handoffs on the “corner side” along with an enhancement of the handoff (Elbow-Down-Take):

With “Flip-Get” the Bucks can enhance the handoff by ball screening for the recipient with the player on the elbow. The sequence is flip to the ball side corner player then get him open with the ball screen.

The players in the pinch post alignment on the weak side use a flare screen.

The Bucks often dump the ball into the player posting on the elbow on the corner side and flow into Elbow-Down-Curl. The passer down screens for the player in the corner. The cutter curls, the screener pops and the elbow player becomes the facilitator.

In the video below, the Bucks score off the elbow dump and curl combination.

Below we see the Bucks dump it into the elbow, down screen, curl and pop, hit the pop player then get into the side pick and roll.

As a bonus, here is a clip of Malcolm Brogdon dumping it into the elbow then aborting a down screen to counter a switch with a slip:

The elbow entry demonstrates a growing trend in the NBA of playing off the elbow. In many ways, the elbow has become the new low post.

Below are clips of a few Swing Step Up possessions. Note how the Bucks use Antetokounmpo in various spots in the offense. They will also “invert” on the pinch post side at times to set the step up with a smaller player and introduce the pick and pop option.

The Bucks may also swing reverse, then dump it into the elbow and sprint into an immediate take. The passer “takes” the ball from the elbow player.

In both the step up ball screen and elbow take options the pinch post side of the court is cleared out for the attack.

Lastly, Push-Get uses a the dribble push option to get the Bucks seamlessly into a side ball screen. The guard advancing the ball dribbles below free throw line extend and pushes the corner player through to the other side.

Below, Brogdon dribble pushes toward the corner and Antetokounmpo sets the deep ball screen.

The Milwaukee Bucks may very well be the team of the future in the NBA. Antetokounmpo seems poised to become the most dominant force in the NBA and the acquisition of Eric Bledsoe signifies the Bucks belief that the future may be now.

The Corner Offense is a key part of the Bucks attack. It is a blast from the past that the Bucks hope their stable of modern NBA players can iterate into a versatile positionless style offense that dominates today’s NBA.