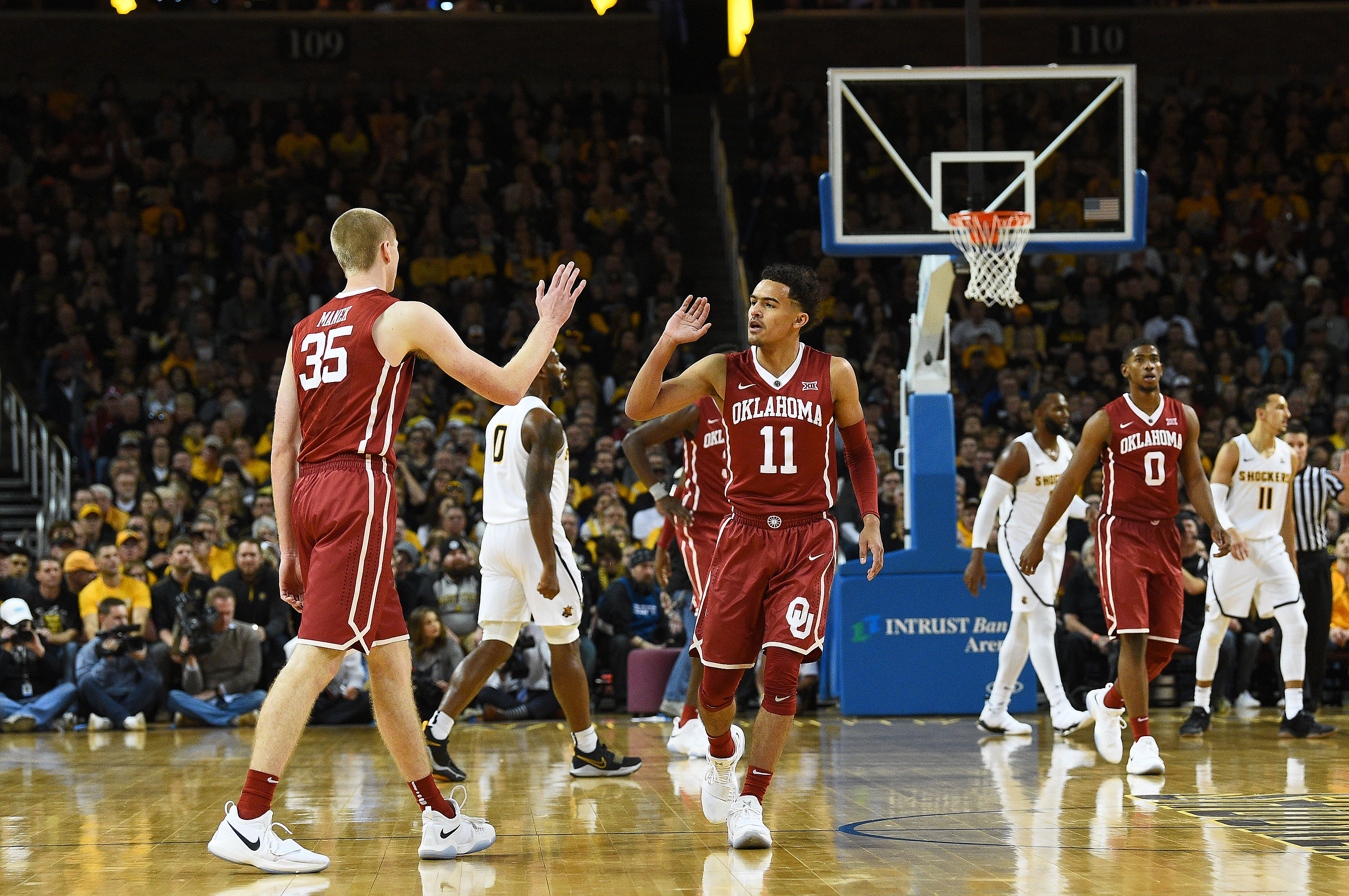 Players can teach coaches a lot about the game and Trae Young, the electric point guard for the Oklahoma Sooners (12-2, 2-1 Big 12), is a virtual Transition Offense clinic. Young has drawn comparisons to Steph Curry due to his ball handling skills and shooting range, but his court vision is impressive as well.

Coach Lon Kruger has an uptempo attack, the Sooners are third in the nation in Adjusted Tempo, and Young is the conductor of that attack. What follows are numerous #TransitionOffenseTips illustrated by the Oklahoma Sooners and Young.

Let’s begin with terminology. The graphic below sets the stage for what Young and the Sooners will demonstrate. There is a theme to these terms – movement. More specifically, rapid movement. The movement theme borrows from modes of transportation. Areas of the court are named so players and coaches can speak a common language in Transition Offense. In many of the clips in the video below Young receives the outlet pass higher than Free Throw Line Extended (FTLE). The area below FTLE is called the “Dead Zone” and the goal is to never receive an outlet pass in the Dead Zone.

Young often gets “butt to sideline” facing the interior of the court (pictured below). Most often the defense will recover in the middle third of the court and the outlet receiver needs to get clear of all that traffic to make themselves available for the outlet pass. The Sooners have figured out that by running hard with great lane integrity Young will find them. After receiving the outlet, Young’s eyes are up looking to advance the ball with the pass. By “pitching ahead” trip after trip the Sooners are able to test the transition defense and conditioning of their opponents. They attack when the defense is most vulnerable often needing no “offense” beyond their primary break to score. It is easy to see Kruger emphasizes the “pitch ahead” and believes in its effectiveness.

Transition Offense Tips: Pitch Ahead Rule – “If you can, you must.”

If there is a player ahead open, Young finds them. Guards fill the “rails” and run at top speed while a “big” rim runs hard down “Main Street.” Young may make passes up the rail (think high speed rail like a Bullet Train), to the rim runner or the long diagonal advance pass (Young is particularly adept at this pass). The pass moves faster than the dribble and the “pitch ahead” is the key to the Sooners’ pace.

Transition Offense Tips: Pitch Ahead! Get the ball airborne over the halfcourt line as often as possible!

To test the effectiveness of your transition offense, see how well your players follow the “Pitch Ahead Rule” and how often the ball is airborne over the halfcourt line. Players in the rails and Main Street should get to top speed in the first three steps and the point guard, like Young does in the video below, should reward their efforts.

One would have to assume that opponents prioritize transition defense when facing the Sooners. Getting back would be priority number one, but that is easier said than done.

At times when opponents do get back, or at least take away the pitch ahead, Young goes to work on the next phase of the primary break attack – “cracking the shell.”

Transition Offense Tips: If no pitch ahead is available, “crack the shell” with the dribble.

Cracking the shell is driving the ball inside the three point line as deep as possible, preferably all the way to the rim. If the pitch ahead is not there, the point guard must become a problem for the defense and look to get a paint touch via the dribble.

Young weaves his way through traffic, cracks the shell seeking to score. Often, Young “crosses Main Street” with the dribble. This is particularly pesky for the defense as they sometimes lose track of the ball as it crosses the floor behind them. Young does not solely rely on sheer speed to make his way to the rim. It is often the change in speed that is most deadly. With an array of hesitations, inside-out dribbles, crossovers and crafty finishes Young is a problem in transition.

Video – Trae Young “cracking the shell” for scores at the rim, floaters and assists:

When Young is unable to score with the drive, cracking the shell offers a secondary benefit. Rim protectors are forced to stop the ball leaving the defense vulnerable to the lob. The defense has been collapsed which open up shooters for kickout threes as well.

Another observation, in both of the videos above many of the transition baskets are “scorebacks” or “right back at you” baskets. The opponent has just scored and the Sooners inbound and outlet quickly to answer the score within seconds. What’s done is done and Oklahoma wastes no time pouting after being scored upon. They promptly race the ball up the court and score back.

Transition Offense Tips: Seek scorebacks! Get it out, get it in, get it up and answer a score with a score within seconds!

Kruger and Young are an excellent pairing. Kruger’s uptempo offense is allowing Young to flourish in a point guard-led break. Young is not shackled by a deep library of sets. Instead, Kruger grants Young freedom to be the catalyst of the Sooners offense.

Transition possessions account for 26.4% of the Sooners offensive possession (Per Synergy Sports), tops among high major programs. No high major team has made more transition field goals (147) than the Sooners and their efficiency (1.22 Point Per Possession) in transition is impressive as well.

Kruger is no stranger to having a magnetic talent on his squad. Sacramento Kings guard Buddy Hield took the Sooners to the Final Four two seasons ago with his ultra green light and penchant for the big shot.

The key for the Sooners will be tempo and shot making. Not many teams will want to play at Oklahoma’s pace and letting Young display the above transition offense tips may be a key to a return trip to the Final Four.

For help with practice planning and implementation of these transition offense tips and other offensive elements for finding, using and creating offensive advantages please reach out and join our community for basketball coaches!