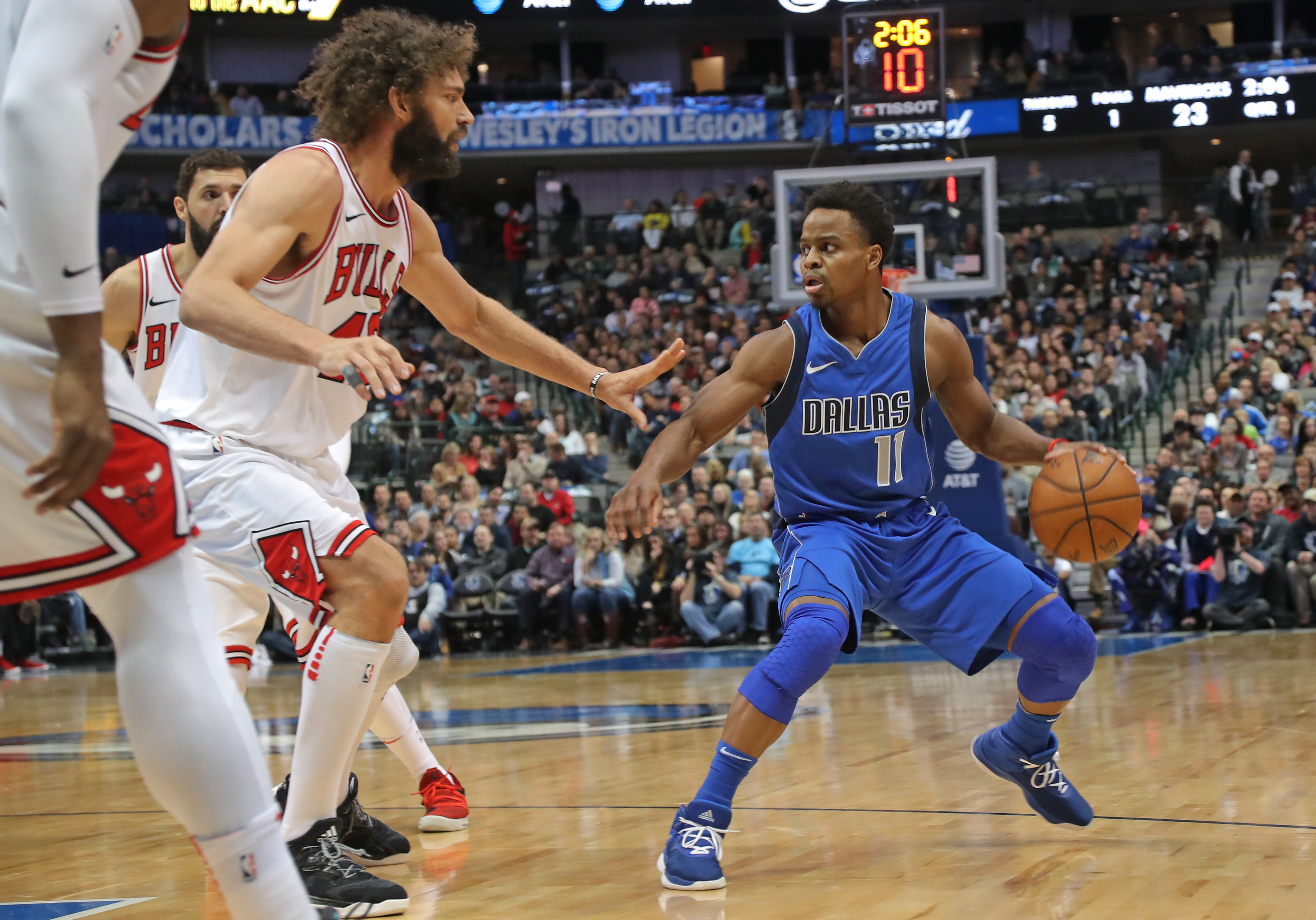 A breakdown of the Dallas Mavericks trademark sequence of actions – “Dallas Action” – and how it flows through their playbook.

When a series of actions is so closely associated with a team that the actions adopt the team moniker, you know they have been fruitful. Such is the case for the trademark “Dallas Action” from the Dallas Mavericks.

This sequence is a Rick Carlisle staple and over the years longtime Mavs such as J.J. Barea, Devin Harris and most notably Dirk Nowitzki have thrived within the various options of the set.

While Carlisle and the Mavs may have another name for the set, to basketball minds it is often called “Dallas Action” and it is a common thread throughout the Mavericks’ playbook. Let’s take a look at “Dallas Action” the offensive cornerstone for the Dallas Mavericks.

The setup begins with the ball centered, and the post players (Player 4 and Player 5) at the elbows. A wing makes an Iverson cut across the court using screens from Player 4 and Player 5. The Mavs want to get their best shooting big (think Nowitzki, Player 4) into a pick-and-pop at the wing with the cutter (Player 2 as diagrammed below).

There are possession, however, when the cutter makes a speedy cut, receives effective screens and their defender is trailing on the catch. Player 3 clearing out gives space for Player 2 to attack on the catch by simply ripping and going baseline.

If no advantage is present on the catch, Dallas must create one. Again, the objective is to get their best shooing big into a pick-and-pop at the wing. Above we see Player 5, after setting the second screen for the Iverson cut, screen across for Player 4. This enables Player 4, often Nowitzki, to arrive alone at the wing ball screen for the pick-and-pop. Surely hundreds, perhaps thousands, of Nowitzki’s 30,000+ points have come from this very sequence. These options are executed in the video below. Player 1 would space away high and wide making themselves available for the swing pass should the pick-and-pop not yield a shot. The swing pass to Player 1 would trigger the same step-up spread ball screen from Player 5 for Player 1. “Dallas Action” from this alignment variation is featured in the video above as well.

In what is a good example of connecting inbounds to offense, the Mavericks often get into “Dallas Action” from sideline out of bounds (SLOB) situations. Carlisle takes a cornerstone of their half court offense and features it in the Mavericks’ SLOB series. Players are familiar with the action and options and are able to flow into something they know from an inbounds situation.

Elevator “Dallas” should look familiar. Players 4 and 5 set and elevator screen to free Player 2 for the entry from the sideline. Player 1 is the inbounder and will make the Iverson cut over the top of Players 5 and 4. Of course, if Player 1 catches with an advantage, rip and go baseline behind the clear out from Player 3.

In many lineups this season Nowitzki has played center. While the lineups may vary, the rule applying to “Dallas Action” does not. The best shooting big gets into the wing pick-and-pop. In the scenario diagrammed below, Player 5 is the superior shooter. Player 4 screens across for Player 5 who gets into the pick-and-pop with Player 1. Player 2 would widen and space high so Player 1 may swing it to him/her if the pick-and-pop did not yield a shot. The swing would trigger the step-up spread ball screen from Player 4 on Player 2 (diagrammed below). The SLOB play looks and feels like the halfcourt offensive set. The Iverson cut, the wing ball screen, the pick-and-pop concept, the swing into the step-up spread ball screen are a common thread in the Dallas offense. The video below shows the SLOB with the trademark offensive sequence ingrained.

The Mavericks have been a solid franchise for many seasons due to their stability in key positions; namely Carlisle and Nowitzki. As they begin to retool their roster, new players will be indoctrinated into the program. Younger players like Dennis Smith, Jr. will take over as fixtures in the Dallas lineup. As players come and go and the Mavs’ roster evolves look for “Dallas Action” to remain a staple as long as Carlisle is at the helm.

January 5, 2018 – Dallas, TX, USA – The Dallas Mavericks’ Yogi Ferrell (11) works to set up a play in the first half against the Chicago Bulls at the American Airlines Center in Dallas on Friday, Jan. 5, 2018. (Credit Image: © Rodger Mallison/TNS via ZUMA Wire)
Sharing
Authors