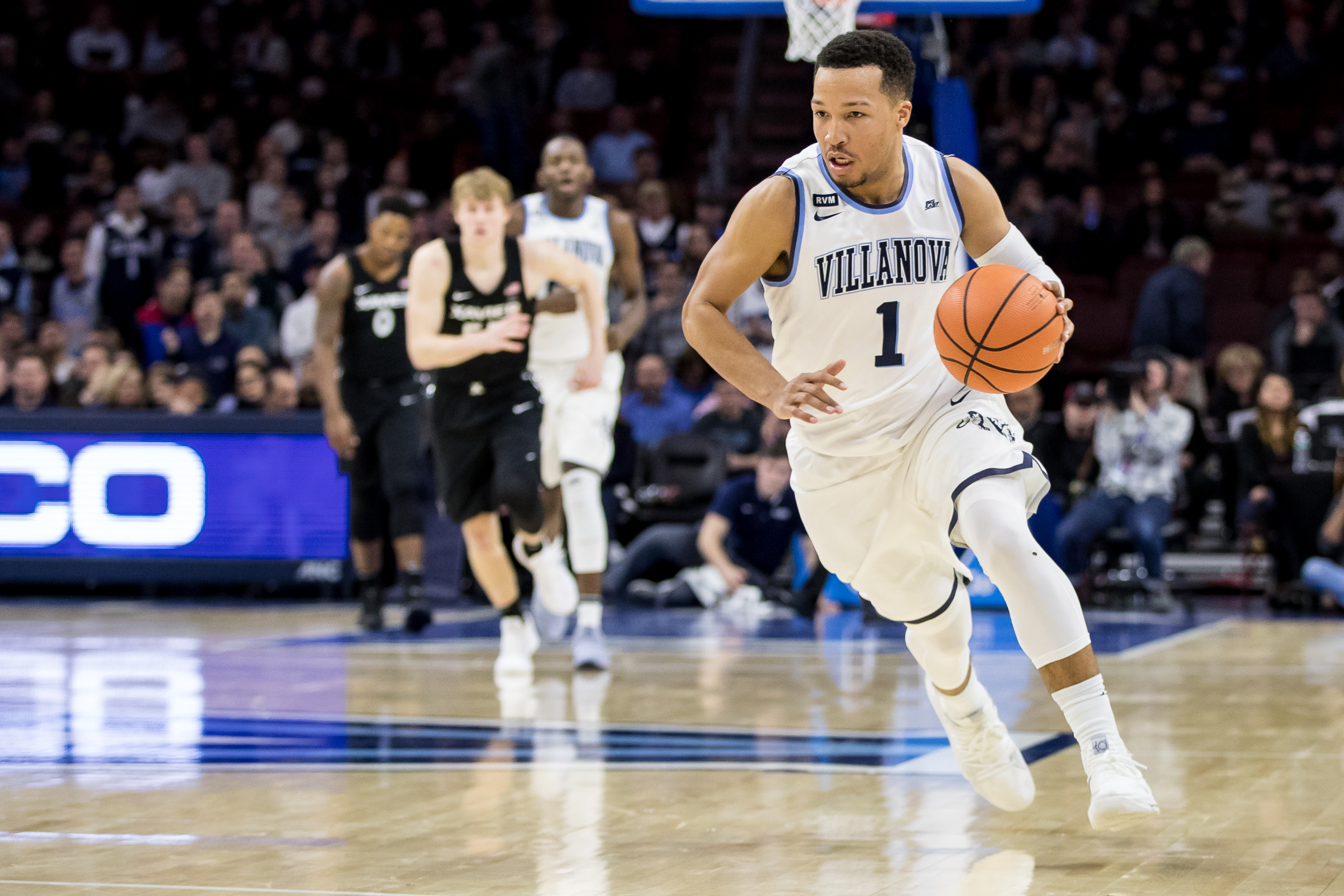 Villanova’s Jalen Brunson is a player of the year candidate who excels at fundamentals for a complete overall game.

Jalen Brunson has been a staple of college basketball for the last 3 seasons. The Villanova junior is a coach’s dream when it comes to point guard play. He is a winner and leader who can shoot the ball, see the floor and control the pace of a game. He has taken his game to a new level in the 2017-2018 season, propelling himself to the top of many NCAA player of the year lists. His shooting ability and footwork are two keys that separate him from other PG’s. Let’s take a deeper look into what makes this Wildcat so special and a Wooden Award candidate.

Brunson has always been a good 3-point shooter, but has made himself into an elite marksman this season. According to sports-reference.com, Brunson shot 38% from deep while taking just over three 3’s a game as a freshman and sophomore. In his junior campaign, he has increased his 3-point shooting percentage to 48% while taking just over five 3’s a game. This puts him as a top five 3-point shooter in all of Division 1. Not to mention, he combines this with his incredible mid range game where he is a top 10 player in eFG% at 66%. In Villanova’s 4-guard offense that relies on ball screens concepts, he is the perfect compliment to get his own shot and create shots for others.

The beauty of Brunson’s game is that he performs fundamental movements at an elite level. Not an elite athlete nor gifted with height (Villanova lists him at 6’3″ on its official roster, which seems a bit generous), he cannot rely on his physical traits. He shoots the ball incredibly well from all over the floor, and is also exceptional at driving and finishing. Using a combination of fakes and footwork, the guard is able to get create space and get his shot off quickly. His footwork, specifically, is some of the most impressive footwork I have seen in recent years from a college player. Now let’s analyze specific pieces of Brunson’s game that allow him to be so effective.

Brunson’s ability to shoot the three forces defenders to play tight to him and gets into his pull up off of shot fakes, dribble moves and hesitations. He is not the greatest athlete on the floor and knows his strengths, so he doesn’t always go up against bigger defenders but instead pulls up for the mid range shot. What separates his pull up from others is his footwork. It is the same every single time he pulls up with his inside foot hitting the floor first and outside foot second. His feet are fast to the floor which allows him to quickly elevate into his shot. An underestimated factor is how balanced he his. Many players tend to lean one way or the other, or are falling forward or fading back, but Brunson’s footwork keeps him balanced. Below you can see how consistent and quickly he is able to get into his pull up.

Competitive, high energy shooting drill that works on the 1 dribble pullup. Has multiple variations, including competing against the clock, 2 or more in a row at each spot, etc. Great to use during Improvement Season workouts or as a change of pace in practice. Make two, 1 dribble pull ups from each of the five spots. Give a great shot fake and a violet rip. Jump stop before each shot and elevate into your jumper. Cones are there to represent each of the five perimeter spots at which you’ll catch the ball. Note: for an added challenge, or to keep things fresh – hit two in a row at each spot before moving to the next.

The shot fake is such a simple but effective fundamental that is not used by enough players. Brunson’s ability to shoot the ball makes his shot fake even more deadly. He makes his shot fake look just like his regular shot from the pick-up to the shot pocket. The form is textbook, with his eyes on the rim at the point of the catch and hips low as he bring the ball to the shot pocket. After the shot fake, he rips the ball into a low sweep, giving him momentum into the drive and keeping his body low (chest to floor). Below you can check out Brunson’s textbook shot fake.

Favorite drill to work on your shot fake is Shot Fake Finishing.

When Brunson is cut off on a drive, or recognizes that he has a smaller defender, he will turn his drive into a post up. This is often called a Barkley move because it was made famous by the legendary Charles Barkley. Once in the post up, Brunson can use his elite footwork and array of fakes to create an advantage. Not only does Brunson score out of a post up, but it provides a great opportunity for him to play inside-out and find open teammates on the perimeter. In the post up, many help defenders turn their heads or dig into the post and this is an ample time for teammates to cut to the basket or relocate. Watch how Brunson dribbles into a post up below.

Favorite drill to work on dribbling into a post up is Barkley Key Finishing shown below. A move that Brunson often uses to finish off of a drive or post up is the back pivot. This is when he comes to a stride stop (1-2 stop) and a player is on his inside hip and he performs a forward pivot off of his back foot. The back pivot helps create space to be able to finish or shoot. It’s another simple yet extremely effective move when used in the right situation and a player is on balance. This is a move that all players can and should incorporate into their game. Check out how Brunson utilizes the back pivot below.

Favorite drill to work on footwork and the back pivot is Elbow Finishing shown below.

Check out a comprehensive database of basketball drills on the FastModel Sports PlayBank.