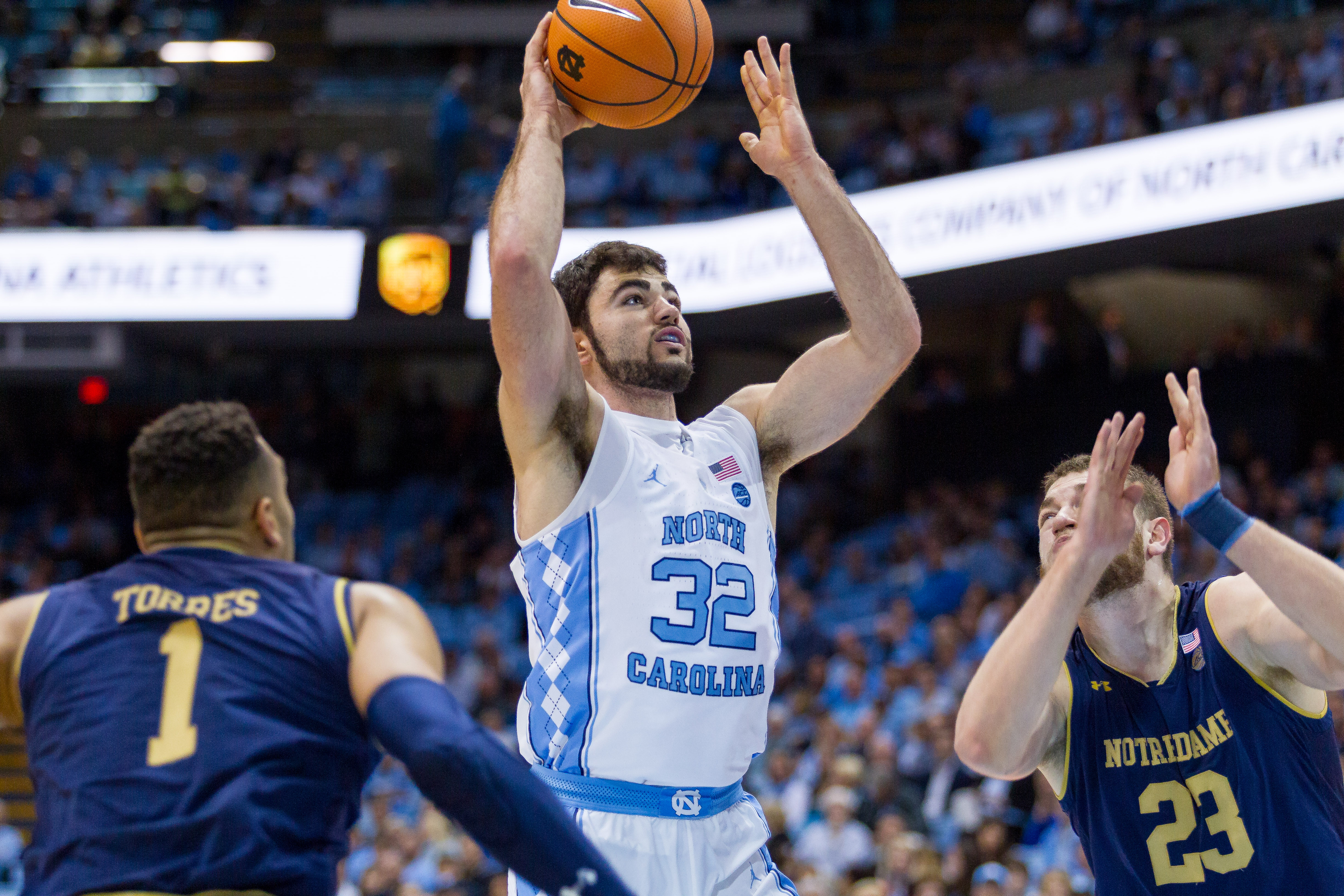 North Carolina’s Luke Maye has put himself in the Wooden Award conversation with a versatile skillset based on elite shooting and rebounding.

Luke Maye blasted onto the scene during North Carolina’s title run last season and eventually hit the game winning shot in the national championship game. The 6’8″ junior is a former walk on who transformed his body and game to become a NCAA Player of the Year candidate. A full time starter for the first time in 2017-18, Maye has obviously has seen his minutes and numbers increase, but along with that his efficiency has increased as well, a testament to his hard work and skill while being asked to do more for the Tar Heels. Outside shooting is the staple of his game as a stretch forward, but his all around skill is what separates him from others at his position. Let’s take a deeper look into what makes Maye special and on the Wooden Award watch list.

Maye’s size and ability to shoot make him a match up nightmare. If a smaller defender is guarding him, he takes him into the post. Matched up against a bigger defender, he can take him outside as a threat to shoot or drive. Maye is shooting 51% from the field and 46% from the 3-pt line, according to CBS Sports. Not only is he an elite shooter, but he is an elite rebounder as well, averaging 10.2 per game.

Although not the most athletic player on the floor, Maye understands his physical limitations and plays within them, counteracting them with his above average skills. He shoots the ball incredibly well and much of his outside game is based off of this ability to shoot. If he is open he takes the shot and if a defender closes out hard he attacks the basket on the catch, typically off of a split catch. In the post he has good footwork where he uses it to create a layup, jump hook or his favorite – a fadeaway jumper. His ability to track the ball allows him to be a great offensive rebounder, and get baskets without having to necessarily create his own shot.

As Maye usually plays the 4 or 5 for UNC, he is often matched up with a player taller and longer than him. A simple jump hook or up and under doesn’t always work against longer more athletic players, so Maye uses a highly effective fadeaway jumper. On the fadeaway, he prefers to go right shoulder, but has the ability to go left as well. Once he has caught the ball, Maye takes a dribble or two into the defender to negate some of the defenders athletic ability and create more space. After creating contact, he takes a long stride with his outside foot, creating even more separation between him and the defender, before rising up for the shot.

Attacking on the Catch

Maye is exceptional at reading his defender on the catch and attacking a poor close out to create an advantage. He often uses a split catch to quickly get him going down hill where he can finish at the rim. He also utilizes a fake rip and go, where he quickly jabs one way and attacks the opposite direction to use the defender’s momentum against them. Attacking on the catch not only allows Maye to take advantage of the close out, but also the help defense before it has time to get in position.

Drill to rep the split catch below. Player 1 starts in front of x1. Game begins on player 1’s movement. Player 1 sprints around the cone and receives a pass in a split stance. x1 must go around cone as well.

At 3 ORPG, Maye creates extra scoring opportunities not only for himself but also for his team. As soon as he recognizes that there is a shot attempt, he quickly puts himself into a rebounding position, creating contact with his defender and solidifying inside position. The most impressive aspect of all of this, is Maye continues to watch the flight of the ball throughout the shot and the contact, and continues to reposition himself for the best possible chance to get the rebound.

NBA Rebounding, shown below, is a drill to rep tracking a shot and rebounding/finishing in traffic. Coach shoots ball up and three players compete for rebound and finish, working on rebounding and finishing through contact. First player to 3 wins. Coach shoots the ball up after each make.

Maye is able to create a huge advantage for his team in transition because of his ability to rebound and handle the ball. Many times after getting a defensive rebound, Maye leads the fast break with the dribble or hits a teammate with a long outlet pass. His ability to to do this also allows his teammates to sprint the floor for easy baskets in transition.

Related Post by Jordan Petersen: Training Guards and Posts Together