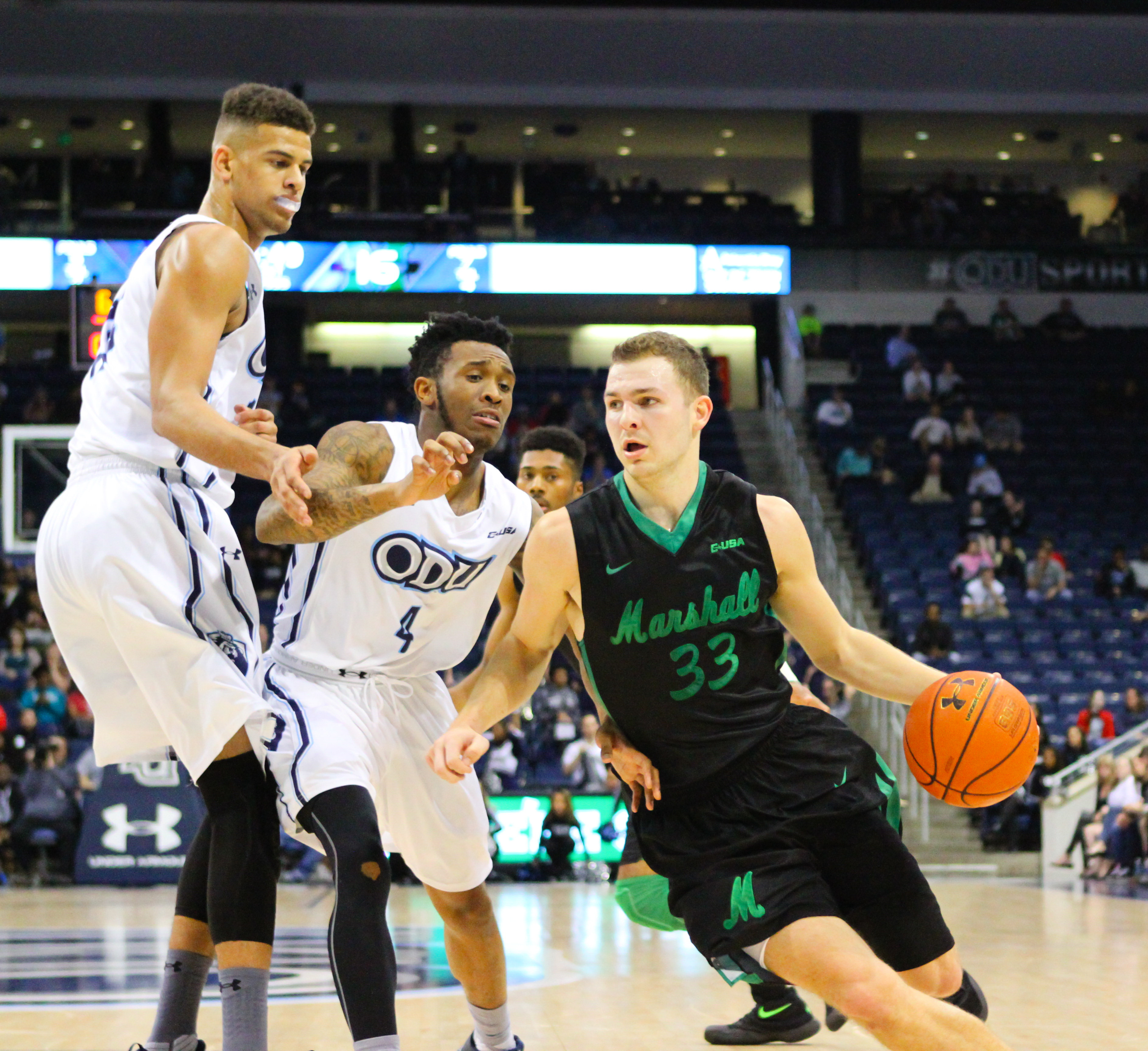 The Marshall Thundering Herd have spaced and shot their way into the NCAA Tournament powered by the Drag Screen concepts of Coach Dan D’antoni.

One of the hotspots for college basketball analytics is Huntington, West Virginia home of the Marshall University Thundering Herd (24-10, #13 Seed, East Regional). Coach Dan D’antoni has overseen a turnaround of the Marshall basketball program and his squad has shot, spaced and paced their way into the NCAA Tournament for the first time in 31 years.

You may recognize the name. D’antoni is the older brother of Houston Rockets Head Coach Mike D’antoni. The brothers share a love for an analytics-friendly offensive style rich with spacing and shooting. The elder D’antoni offered a viral and staunch postgame defense of analytics in college basketball, a domain associated more closely with the NBA. The Herd score 84.3 ppg, good for 12th in the country. Guards Jon Elmore (22.8 ppg) and C.J. Burks (20.5 ppg) both average over 20 points per game.

The Marshall offense operates at 0.982 Point Per Possession (PPP). The Herd have attempted 901 threes this season (26.5 3PA per game). Marshall has scored on four post-ups all season…FOUR.

So besides spread spacing and deep threes, what else do Marshall and the Rockets have in common? The Drag Ball Screen. The Marshall offense looks a lot like Houston’s offense with Elmore playing the role of James Harden and Bosnian big man Ajdin Penava (15.5 ppg, 1.532 PPP as the “roller” in pick-and-roll action) playing the role of Clint Capela.

Marshall elects to keep the lane open in transition and do not use a rim runner. Instead, they fill the corners, the high wing and drag screen themselves into Spread Ball Screen Offense from the break.

Marshall also utilizes the “running slip” as they drag screen for the ball handler. The screener does not get fully set and ball screen in the traditional sense. Instead, he shows the intention to ball screen, but as soon as he sees the on-ball defender intends to go over the screen he slips or “sprint rolls” out of the screen to the rim. The screeners defender may hedge or drop a bit too soon and his man has slipped to the rim.

The ball handler may accept the screen into the single side or the double side looking to score while reading the defensive coverage. In the video above, Penava “breaks the defense” with running slips and rolls to the rim and easy baskets.

The ball handler may score on the attack as well. Below, Elmore, who led Conference USA in both scoring and assists, finishes with a variety of drives into the double side, the single side and “rejections” of the ball screen into the double gap to the single side. Elmore can collapse the defense and score himself or find the advantage created by the penetration and hit open teammates.

In the bonus video below, check out the similarities between Marshall’s Spread Ball Screen transition offense and that of the Houston Rockets. You’ll see the same open lane in transition, the corners and high wing filled and the drag screen (or running slip) into basic Spread Ball Screen offense.

The Herd also use the “Double Drag” to disorganize the defense and create an advantage in early offense. The lane remains open with no rim runner sprinting to an analytically unfriendly post up. This leaves open the possibility of dribble penetration. Should no attack occur, the ball handler can drag the ball across one or both of the double drag screens.

The first screener may execute a running slip or pop depending on shooting range and defensive coverage. “Roll one, pop one” is common in the double drag scenario. The ball handler must get his defender to the level of the screen. He/She may accept one or both of the screens. And, as always, reject the screen if the defender opens their stance and exposes the double gap for a drive.

In the video below, Marshall demonstrates the double drag screen for running slips, rolls, pops and drives.

In both the Spread Ball Screen and Double Drag, the wings fill the corners. There a times when in lieu of filling both corners, Marshall pairs their guards opposite the ball and use either a single drag or double drag screen with an empty corner.

The empty corner has benefits. Player 1 can reject the screen and attack to the cleared out side. Also, if Player 5 gets into a running slip there is no corner defender to tag the roll. There is also space for the screener to pop for a shot.

In the video above, Marshall shows both the single and double drags with the empty corner in early offense. This alignment can be achieved by design meaning a team’s structured break pairs the guards opposite the outlet pass. Or a team can “flow” into this in those times when the outlet sees no ball side wing ahead. Drive the ball up the empty side seeking to attack the cleared out side. If you cannot turn the corner, cross over and use the drag(s).

D’antoni and his Thundering Herd did not dominate Conference USA in the regular season. They qualified for the tournament by securing an automatic bid after winning the Conference USA tournament. Marshall finished fourth and league winner Middle Tennessee State bowed out in the quarterfinals. Marshall has a tournament-tested foe in front of them in #4 Wichita State in the first round.

The Herd’s spacing and shooting could cause problems for the Shockers. Wichita State would be unwise to overlook the three-point volume and defensive tension Marshall cause. D’antoni has put Marshall in position to showcase their approach on college basketball’s biggest stage. The NCAA Tournament way well be where D’antoni finally gets to “finish his dadgum analytics story.”

For help with practice planning and implementation of an early offense attack featuring Drag Screens or other offensive elements for finding, using and creating offensive advantages please contact us and/or join our community for basketball coaches!